Life On the Margins: Oklahoma State will live, and learn 'tis better to take than give

Share All sharing options for: Life On the Margins: Oklahoma State will live, and learn 'tis better to take than give

Obsessing over the statistical anomalies and minutiae of close and closer-than-they-looked games that could have gone the other way.
- - - 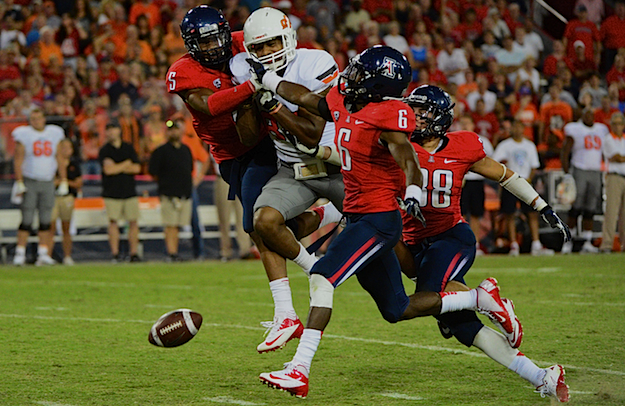 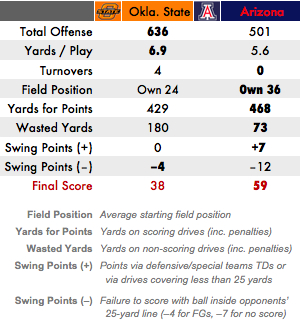 Arizona 59, Oklahoma State 38.
Oklahoma State deserved every ounce of attention it got in 2011 for its chart-topping offense, but as prolific as Weeden, Blackmon and Co. were, the single stat that best defined the best season in school history may actually have been turnover margin: OSU led the nation on the giveaway/takeaway ledger for the season, forcing at least three takeaways in 10 of 13 games. It was no coincidence that the Cowboys' only loss came on of the few occasions that they finished in the red in turnover margin (–2 at Iowa State), and it's no coincidence that their inability to take care of the ball Saturday night – or to take it away – meant more to their fate at Arizona than their ongoing ability to put up nuclear statistics offensively.

Much of the blame naturally falls on true freshman quarterback Wes Lunt, who alternated flashes of nascent brilliance (436 yards passing, 4 TDs) with three crippling interceptions. The second in the series, an ill-conceived lob into the flat to escape pressure in the fourth quarter, was returned for a key touchdown by Arizona's Jonathan McKnight; the third, an icing pick by Jared Tevis, set up a short-field score that turned a tight, back-and-forth game into a rout. Unlike last year, the Cowboys weren't able to generate anything cheap, and unlike in its opener against Toledo, Arizona wasn't about to give it to them.

One important footnote that the "Swing Points" category to the right doesn't reflect is that Arizona scored 20 points – two touchdowns, two field goals – on drives that began inside Oklahoma State territory following the other turnovers. (Alas, none of them began inside the OSU 25-yard line.) That essentially accounts for the margin of victory in and of itself, and if the Cowboys figure out how to keep moving the ball without giving it away, they're still going to be very difficult to outscore.

And Arizona: Ur offense is looking good bb, but you're going to have to play a little non-turnover-based D at some point, too. 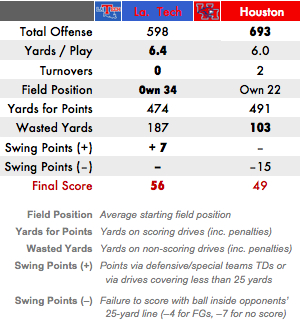 Louisiana Tech 56, Houston 49.
I'll take any chance I can get to write about this game, and one of the more astonishing box scores I've ever encountered. Between them, the Cougars and Bulldogs combined for 1,291 yards, 78 first downs, 26 penalties and 14 touchdowns on a truly incredible 209 offensive plays. (Houston tied an NCAA record with 115 snaps in a regulation game, including a school-record 77 pass attempts by junior David Piland. That's a school record at Houston, which has been putting the ball in the air at unprecedented rates for 25 years. Even Chip Kelly is shaking his fist at these maniacs to slow the hell down.) Somehow, they managed to squeeze in 11 punts, too, which in most games would be a lot, but in this one was the equivalent of missing a shot in basketball.

But as many as it scored, Houston actually left quite a few points on the field: In the first quarter, the Cougars settled for a pair of field goals on extended drives inside the La. Tech 25-yard line, and later turned the ball over on downs in La. Tech territory on two separate occasions in the third quarter. (On the second, they negated a 63-yard drive by failing to convert a 4th-and-6 attempt from the Bulldog 12-yard line.) The death blow was a fumble early in the fourth quarter that set Louisiana Tech up at the UH 14 for an easy touchdown "drive" that extended the Tech lead to a comfortable 22 points. Which, with that turnover and Houston's missed opportunities, happens to be the exact margin of the "swing points" in the Bulldogs' favor.

Honorable Mention: Virginia 17, Penn State 16.
This game doesn't technically qualify under standard "Life On the Margins" criteria – the losing team, Penn State, didn't produce a significant edge in total yards or yards per play, and in fact finished plus-four (+4) in turnover margin – but obviously this space is interested in the fate of Sam Ficken, the pitiable Nittany Lion kicker who missed four of five field goal attempts and had an extra point blocked in a one-point loss. One of the missed field goals was a chip shot, essentially an extra point try from 20 yards out in the third quarter; the last one, of course, was the failed 42-yarder to win as time expired. Thirteen points left on the field when you only needed one is about as cruel a margin as they come.

Even crueler for Penn State fans: Ficken was only on the field because the starting kicker, Anthony Fera, transferred to Texas as part of the exodus of players fleeing the onset of NCAA sanctions just before the season. So that sinking feeling Saturday afternoon is one more thing the faithful can blame on Mark Emmert.