Premature Panic Week: Wisconsin has solutions, but does it know the problem?

Share All sharing options for: Premature Panic Week: Wisconsin has solutions, but does it know the problem? 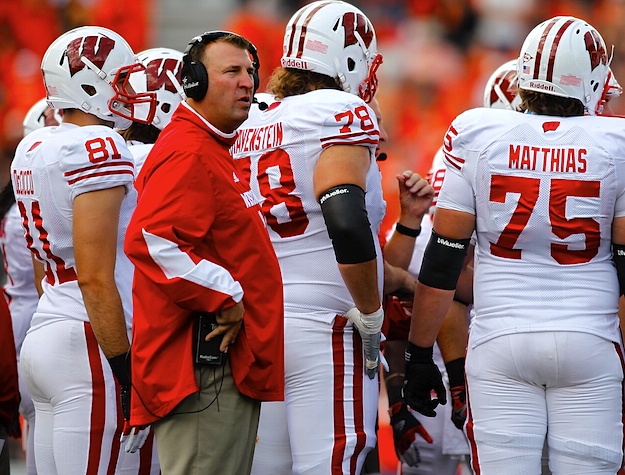 Publicly, at least, panic is usually belied by a token attempt at serenity. No, the ship is not sinking. Yes, your money is safe with us. Yes, we've read the lawsuit and it is without merit. No, I had not been drinking. No, that is not me in that photograph. Yes, we are going to hang together and fight through this as a team. No, we are not going to start pointing fingers.

Wisconsin? After Saturday's 10-7 flop at Oregon State, the Badgers skipped the platitudes, skipped the finger pointing and proceeded directly to the guillotine:

"[Coach Bielema] brought me into his office [Sunday] afternoon after a staff meeting and basically told me he was making a change. We had talked a few times before just about certain things. It was a surprise for me but in this business you've got to anticipate anything. It can happen. It's just like the real world out there. People get hired and fired and coaches get hired and fired.

"Those guys had so much success and they had a coach in my position that they had before for four years that, man, they scored a lot of points, they ran the ball well. I mean, them guys were used to hearing it a different way. So now I come in, here's the new guy on the block and I'm trying to teach them the way I know what's right and the success that I've had.

"It kind of threw a bump in the road. So they had to get used to me. I had to get used to them. We had to work through some things and I really thought we were making good progress. In light of what has transpired I still believe what I was teaching is the right thing to do."

That's now-former Wisconsin offensive line coach Mike Markuson, a 30-year vet who's spent half of his career on Houston Nutt's staff at Boise State, Arkansas and Ole Miss, explaining why he was summarily fired by Bret Bielema after just two games. The guy who held the job before him, Bob Bostad, produced five All-Americans and six NFL draft picks – three of them first-rounders – in four years before following offensive coordinator Paul Chryst to Pittsburgh. Markuson produced a group that struggled mightily in its first game to put away an FCS team, Northern Iowa, and was thoroughly dominated in its second by a defense that finished dead last in the Pac-12 last year against the run. Oregon State held the Badgers to 1.5 yards per carry, four rushing first downs and a long run of 14 yards. 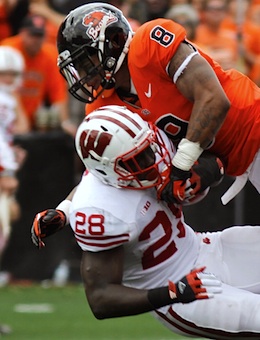 So the foreign element has been purged from the body, and… what? It's a little late for a new dawn to be breaking in the locker room. Markuson's replacement, Bart Miller, is a 20-something grad-assistant type who had been working as a "quality control" coach. The line itself is the same, and still features three first-year starters. The quarterback, Danny O'Brien, is the same guy who completed barely half of his passes in Corvallis, for a paltry 4.4 yards per attempt, and finished with a dreadful 94.1 pass efficiency rating. The offensive coordinator, Matt Canada, is the same guy who for some reason called for O'Brien to put the ball in the air twice as often against the Beavers as he was called to hand it off. (O'Brien dropped back to pass 41 times, more than predecessors Scott Tolzien and Russell Wilson ever did in any game in 2010 or 2011; meanwhile, tailbacks Montee Ball and James White combined for only 18 carries.) Ball may be the same guy who tore up the record book behind a relentless steamroller of a line in 2011, but if so, he's yet to emerge from the fog of the preseason assault that cost him the first several weeks of preseason practice.

For most of Bret Bielema's tenure, and for Barry Alvarez's tenure before him, Wisconsin's greatest virtue has been continuity. They're not changing the philosophy. They're not changing the offense. If they can help it, they're not changing the coaching staff. Russell Wilson notwithstanding, the Badgers' back-to-back Rose Bowl runs the last two years were achieved by veteran lineups that came up together in a program that knew exactly what it was about and what it wanted every day. Choose your cliché: Staff and players were in sync, on the same page, working in synergy, developing chemistry, etc. All that dreaded intangible stuff. But you knew what you were going to get from Wisconsin, and Wisconsin knew, and everybody knew there was nothing much opposing defenses could do about it.

At the moment, no one has any idea what to expect from the Badgers over the remaining ten games of the season, least of all the Badgers themselves, and all assumptions about their status as overlords of the Big Ten's "Leaders" Division are on hold. When the equivalent of a new regional branch manager is asked to fall on his sword following a wild departure from a previously successful strategy (see the run:pass distribution above), you don't have to be in the meetings or practices to recognize that something has been lost in translation among the new chain of command. A pink slip is not an indication of a minor setback that calls for some pointed tweaking. It's direct acknowledgment of a breach that was only getting wider.

Bielema and Canada have a little over two weeks until they're scheduled to be in Lincoln for the conference opener at Nebraska, at which point we'll have some idea of whether the emergency coach-endectomy has done the trick. If not, the problem may go much deeper than they hope, and the fix may not be nearly as quick.