Mid-Major Monday: How Houston longs to slip the surly bonds of Earth

Share All sharing options for: Mid-Major Monday: How Houston longs to slip the surly bonds of Earth 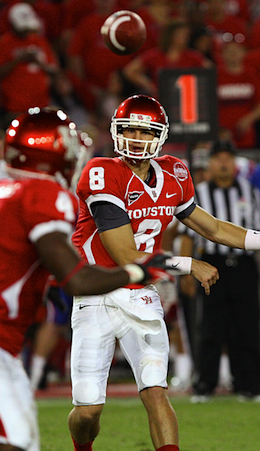 Weekly notes from the undercard.
- - -

How eager was Houston to get back to the basic tenets of "Cougar Football" after last week's flop against Texas State? First, they fired the new offensive coordinator, Mike Nesbitt, after his first game on the job. Thus purged, the Cougars proceeded to perform the solemn ritual of putting the pedal to the effin metal Saturday at Louisiana Tech, which was only more than happy to hit the gas itself after losing its opener to Hurricane Isaac. The result: A wild, four-hour air show in which everyone involved was out to make up for lost time by creating a man-made hurricane of offense.

Gaze in awe at the sheer scale of the project, a quantity-over-quality endeavor par excellence. Houston alone managed to get off 115 plays from scrimmage in a single regulation game, tying an NCAA record. Seventy-seven of that number were passes from the right arm of quarterback David Piland, 53 of which were completed for 580 yards and four touchdowns. Six different Cougar receivers caught at least five passes. Both offenses together combined for 1,291 yards, 78 first downs(!), 14 touchdowns and just two turnovers – both Houston fumbles – on a grand total of 209 offensive snaps. Officials are still assessing the environmental damage and health status of residents in surrounding areas.

If you must know, Louisiana Tech won, 56-49, and in fact never trailed after jumping out to a quick 14-0 lead. But talk of such things as scoreboards and winners and losers, it is all so jejune. The score is beside the point compared to the wonky quest to set new land speed records on Earth and someday fulfill the dream of completing a sluggo to the moon. If Houston is going to lose, at least it's going to lose at 260 miles per hour. And years from now, when that ball lands in the Sea of Tranquility, no one will want to know the score. We just want to know that there's someone out there pushing barriers, and that if you push them hard enough, one bubble screen at a time, eventually they will fall.

• THE CRIB SHEET: Elsewhere in mid-majordom…

• Fun while it lasted. Meanwhile, the FBS noob that pulled the rug out from under Houston on opening day, Texas State, followed up its stunning triumph by getting waxed by Texas Tech in front of a record crowd in San Marcos, 58-10. The Raiders returned an interception 88 yards for the first touchdown of the game on Texas State's first series, and added a second less than a minute on a Seth Doege touchdown pass; their third possession covered 99 yards in six plays. It was downhill from there.

• Not-so-sterling Archer. Kent State was in for a hard enough time at Kentucky Saturday without tripping over its own feet. So when Kent tailback Dri Archer literally tripped over his own feet in his own end zone in the third quarter…

…that was pretty much all she wrote for the Golden Flashes. Up to that point, actually, things were looking up: Kent State had just stopped Kentucky on three straight plays from inside the 1-yard line following a turnover to keep the score within striking distance, 24-14, and the Flashes were moving the ball at a respectable clip. After the safety, the Wildcats scored 21 unanswered on three Maxwell Smith touchdown passes and left with a 47-17 rout.

• MID-MAJOR GAME OF THE WEEK: Utah State 27, Utah 20 (Overtime).
It had been 15 years since the last time Utah State beat Utah, back in 1997, and the gap on the field seemed even wider: The Utes won all 12 games in that span by an average margin of 24 points, then accepted a fancy promotion to the Pac-12. So there was a palpable sense of dread in Logan Friday night when they rallied back back from a quick 13-0 hole to tie the game in the third quarter, then tie it again in the fourth to force overtime – and an even more palpable release when the Utes' final, desperate pass into the end zone fell incomplete. Aggie coach Gary Andersen was so pumped, he started Hulking out on visibly terrified photographers:

• MID-MAJOR PLAYER OF THE WEEK: Chuckie Keeton, QB, Utah State.
Besides proffering an entertainingly enthusiastic celebration, the Aggies' sophomore leader finished with 302 total yards as a runner and passer and a pair of touchdown passes in one of the biggest wins in modern school history. He also demonstrated his leadership by letting his teammates know when it was starting to get a little weird.
- - -
Honorable Mention: Buffalo running back Branden Oliver ran for 238 yards and three touchdowns in a 56-34 rout over Morgan State, on nearly 10 yards per carry. … Air Force's Cody Getz racked up 133 yards and three touchdowns at Michigan. … And Western Kentucky defensive end Quanterus Smith notched three of the Hilltoppers' six sacks on Alabama quarterback A.J. McCarron.

• UPSET OF THE WEEK: Louisiana-Monroe 34, Arkansas 31.
Barring a complete collapse by Arkansas over the rest of the season – not at all out of the question, by the way, for a multitude of reasons – it's hard to imagine a scenario right now in which a 30-point Sun Belt underdog knocking off a top-10 SEC power on its home field, or any field, doesn't wind up as the Upset of the Year. The triumph was the first ever by an SBC team over a top-10 opponent, and UL-Monroe's first ever over any ranked opponent, period, although its victory has achieved an ironic self-negation by knocking the Razorbacks out of the polls altogether.

But it was just as notable for the circumstances. The WarHawks were down 21-7 in the second quarter when Arkansas quarterback Tyler Wilson left the game with an "injury above the shoulders," and proceeded to go up 28-7 when his backup, Drew Allen, found McKay Mekale in the third quarter for what just about everyone in the stadium and playing along at home (or hoping to God they wouldn't be forced to by an upset scare) considered the clincher. We've all seen this episode before. We can recite it more or less by heart. And the script most certainly is not supposed to end with the 30-point SBC underdog rallying for three unanswered touchdowns to force overtime in melodramatic fashion. And while ULM quarterback Kolton Browning is a natural in the role of the wily escape artist who outsmarts the villains, no one would have ever thought of casting him as the hero who outruns them, too:

Monroe's ambush of Alabama in Nick Saban's first season was a landmark upset, but that Tide team still bore the mark of Shula and was nowhere near the irresistible juggernaut it would soon become. Arkansas is not exactly a juggernaut itself. But until further notice, it is now the most prized head in the Sun Belt trophy room.

A SOMEWHAT ARBITRARY MID-MAJOR TOP 10.
1. Louisiana-Monroe (1-0). I don't care if they're not going to stay here or if they could beat BYU or Boise State on a neutral field or whatever. Right now, the WarHawks are the only team in college football with a top-10 road win, which probably ranks right behind Alabama's bludgeoning of Michigan as the most impressive skin on anyone's wall at the moment. Full credit where it's due.
2. BYU (2-0). Cougars' season will be made or broken over the next to weeks at Utah and at Boise State.
3. Boise State (0-1). Ditto Boise's season, which begins in earnest this week against Miami (Ohio) of Ohio with a pre-November loss on the books for the first time since 1997 and no hope of a BCS bowl waiting at the end of the rainbow.
4. Ohio U. of Ohio (2-0). Bobcats' opening day upset at Penn State may lose its luster by the week, but if they get out of Marshall Saturday at 3-0, they may not lose in the MAC.
5. Utah State (2-0). Currently leading the nation in depressingly addictive gifs.
6. Nevada (1-1). Wolf Pack opened up with a win at Cal, and came just one point short against South Florida. At that rate, the Mountain West title will come down to a Dec. 1 visit from Boise.
7. Louisiana Tech (1-0). Bulldogs' record may not look like much after upcoming dates against Texas A&M, Illinois and Virginia, but the watered-down is theirs for the taking over the second half of the schedule.
8. Central Florida (1-1). UCF is the only Conference USA team that makes the cut this week, on the strength of not getting pounded to smithereens at Ohio State. Don't expect that to last.
9. Louisiana-Lafayette (2-0). Remember to say a brief prayer for the Cajuns this weekend before they run into an Oklahoma State team on the rebound.
10. Toledo (1-1). Pushing Arizona to overtime in Tucson doesn't look so bad right about now.
- - -
Honorable Mention: Bowling Green, Northern Illinois, San Jose State, Texas-San Antonio, Tulsa.