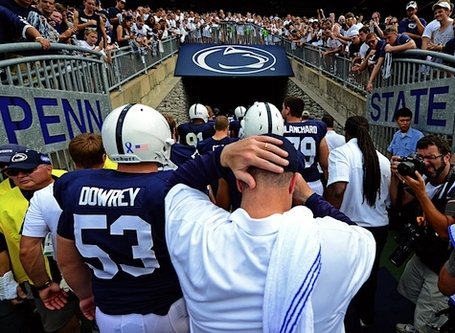 Ohio 24, Penn State 14
- - -
As long as there was still a team at Penn State, there was still a chance, even it was an extraordinarily slim one. The ongoing existence of the program meant some hope for an alternate reality to the one suggested by heavy-handed NCAA sanctions in July, which designed specifically to ensure a lost decade in the wake of the Sandusky scandal and the Freeh Report, defined by an exodus of talent, losing records, dwindling attendance and a steady erosion of the assumption that Penn State is a first-rate football power. As far as the NCAA was concerned, if Nittany Lion football is going to continue to exist, it would be as a demoralized shell of its former, vital self. All Penn State had left was the games themselves to prove otherwise.

Clearly, it is not otherwise. The loss today was Penn State's first at the hands of a double-digit underdog in nearly a decade, and only the second ever at the hands of an ostensible MAC patsy. It came on a day in which the offense turned the ball over three times and afield to generate a single play longer than 22 yards; more jarringly, it came on a day in which the vaunted defense yielded 499 yards and extended touchdown drives on three of Ohio's four full second-half possessions. (The fourth resulted in a missed field goal.) The last Big Ten offense to gain that many yards against the Nittany Lions was Michigan State in 2001.

Even the doomsayers thought the effects of bowl bans and scholarship caps would work on a delayed reaction. Amid all the jabs about Penn State being effectively reduced a MAC-level program, there was almost no one who thought the Lions would actually look like a mediocre MAC outfit on day one. That's the reality, right now: They do miss the players they lost to other schools, quarterback Matt McGloin is not about to turn a corner under Tom Brady's former coach and emotional scenes in Beaver Stadium are not going to instill the frighteningly green secondary with sudden wisdom. This was supposed to be the buffer year before the real bite.

Now, that just sounds depressing. After a double-digit loss to a double-digit 'dog, at home, under a first-year coach, with the stadium at full thrum in defiance of the prophets of doom, what could be worse than the realization that it's all downhill from here?