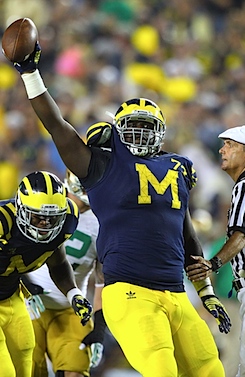 On the day's most pivotal players, personalities and schemes.

• Will Campbell, DT, Michigan (vs. Alabama). Between seniors Barrett Jones and Chance Warmack and junior D.J. Fluker, Alabama comes in with three potential first-round draft picks who have combined for 84 career starts on the offensive line, and will also be introducing their heir apparent, Cyrus Kouandjio, at left tackle. On the other side, Michigan is breaking in two new starters at defensive tackle and doesn't appear confident yet in five-star freshman Ondre Pipkins, who has been dealing with a preseason neck injury and wasn't listed on the two-deep for the Wolverines' trip to Dallas. Surprise: Alabama aims to pound, pound and pound some more.

Campbell, now a senior, has never lived up the blue-chip hype that accompanied his arrival four years ago, settling instead for three years of spot duty off the bench. But he reportedly showed up to preseason camp in fighting form for possibly the first time in his career, and if there's ever been a time for him to show it, tonight's the night.

• Ricky Barnum, C, Michigan (vs. Alabama). Aside from the recruiting hype and the weight loss, all of that goes as well for Campbell's counterpart on the opposite side of the line of scrimmage. Barnum is another senior who'll be making his first career start in place of the best center in college football in 2011, David Molk, against Alabama's immovable man-mountain of a nose guard, Jesse Williams, anchor of one of the best run defenses in modern college history last year. Denard Robinson notwithstanding, Michigan can't do anything it wants to do if Barnum is overwhelmed in the middle of the line.

• Stephen Morris, QB, Miami (vs. Boston College). Last year, Miami's season ended with a four-interception debacle against Boston College from the arm of hardcore pick legend Jacory Harris, one of which was returned for a B.C. touchdown in a 24-17 B.C. upset. Morris would have liked to have had the starting job then, and more than a few 'Canes fans wish he would have, too. If there is any hope for Miami to avoid another 6-6 fizzle – or worse – it has to start with him proving them right in the most winnable conference game on the schedule.

• Pat Miller, CB, West Virginia (vs. Marshall). Miller's absence in the spring due to a broken foot left the Mountaineers with just two scholarship cornerbacks on the roster at the time, neither of whom had played very much. Now healthy again, Miller will most likely be matched up against Marshall's most gifted receiver, future pro Aaron Dobson, who is the Herd's only realistic chance of keeping pace with West Virginia's atomic passing game.

• Jaron Brown, WR, Clemson (vs. Auburn). Sammy Watkins' absence from the lineup leaves junior DeAndre Hopkins as Clemson's top target in the Georgia Dome, but the drop-off is much steeper on paper from Hopkins to Brown in the No. 2 role. If the Tigers have any chance of rekindling last year's explosiveness without their most explosive player,