Share All sharing options for: Hang on tight, Boise State. 2012 may be a very bumpy ride. 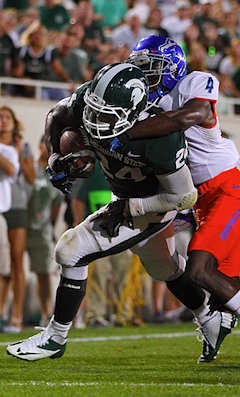 Michigan State 17, Boise State 13
- - -
1. The final score says this one was close, and considering Boise State actually led well into the fourth quarter, I guess there's no denying it. But make no mistake: For now, at least, these Broncos are not the same Broncos that amassed the best record in college football over the last four years.

Which is just about what everyone expected, considering that the starting lineup tonight was literally a different set of players, in place of 17 departed seniors who helped put the program on the map. Only of them was Kellen Moore; the rest included Boise's leading rusher, leading receiver, four starting offensive linemen, nine of the top ten tacklers on defense and all eight players selected to last year's All-Mountain West team. Thriving opportunistic streak notwithstanding, this looked like a team in search of all those guys, all at once. Michigan State held the ball for 19 minutes more than the Broncos, outgaining them by a whopping 255 yards of total offense; Boise's output for the night, 206 yards, was the worst in Chris Petersen's tenure as head coach by a wide margin. In the trenches, a typical strength for Petersen's teams, this one was pummeled for 213 yards rushing by MSU, to just 37 yards of its own. Moore's successor, Joe Southwick, completed fewer than half of his passes, and capped the Broncos' only sustained drive of the night with an interception into traffic.

If not for a 43-yard interception return by safety Jeremy Ioane in the second quarter, Boise would not have reached the end zone, and the outcome likely never would have been in doubt. In general, the overhauled defense bent but never broke until the very end, first on a 9-play, 56-yard Spartan march for the go-ahead touchdown, then on a 13-play, 52-yard drive that drained the final 6:32 from the clock. Usually, the Bronco offense would have found a way to put the game away by then. This edition did not come close in the second half. The question now is, what is "usual" going to mean for the latter from here on out?

2. Le'Veon Bell, good god, son. Forget the yardage, and even the hurdle: Michigan State's oversized tailback carried the ball 44 times tonight, and tacked on another six receptions. Not even including blocking and play-action fakes and whatever. At that point, it doesn't even matter what you're doing with the ball. When you get tackled 50 times in a Division I football game, you get all the ice baths. Your new roommate is a personal masseuse. In lieu of a statue, MSU should make a permanent indentation of Bell's body in the turf.

For the record, the Spartans' new workhorse racked up 210 yards on 4.8 per carry, with two touchdowns, and had 265 total yards from scrimmage. Congratulations if you had him on your fantasy team, and cross your fingers that the offensive brain trust doesn't start thinking about anything crazy like pacing themselves.

3. Elsewhere, the Spartans were appropriately sloppy for opening night, committing ten penalties and four turnovers, a couple of which killed likely scoring drives. Quarterback Andrew Maxwell did not inspire confidence with three interceptions and zero touchdowns. But aside from the giveaways, Michigan State was back to doing basically exactly what it's done in the course of winning 22 games over the last two years: a) Play defense and b) Run the ball until the last few molecules of air have been squeezed out of it. Check and check.

We still have a lot to learn before we can put Boise's value as a measuring stick into context, but assuming a minimum competence level there, the old-school blueprint was as punishingly effective tonight as we've seen it on Dantonio's watch. Clean up the issues a quarterback – a major caveat, but a realistic one – and the Spartans certainly look like they're back in the top tier of viable Big Ten contenders.

4. This may be the angriest coach I have ever seen on camera, albeit briefly, at the expense of Boise State freshman Armand Nance. I missed that fleeting moment in the broadcast, myself. Anyone have any idea what it was all about?

She's okay, folks! I think! (I have no idea.) The really impressive play here? Boise bro who successfully manages to hang onto his hoist partner and get her safely to the ground while being blindsided by two D-I football players. Under the circumstances, it was probably the most impressive catch by a Bronco all night. (Via.)