Share All sharing options for: Unexpected faces show Tennessee exactly the Vols they hoped to see 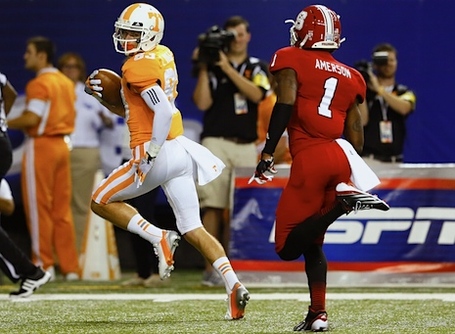 Tennessee 35, N.C. State 21
- - -
1. It was exactly one week ago today that Derek Dooley essentially kicked the reigning SEC receiving leader off the team, which prompted more than a few quips along the lines of "Cordarrelle Patterson must be pretty good." And while it may or may not have anything to do with the sudden departure of Da'Rick Rogers… yeah, actually, turns out Cordarrelle Patterson is pretty damn good: On Tennessee's fifth snap, he blew past the Wolfpack's All-American corner, David Amerson, for a 41-yard touchdown bomb from Tyler Bray, which would have been enough to confirm the hype that followed him from junior college if he hadn't doubled down on it a few minutes later with a 67-yard sprint to the end zone on an end-around.

In between Patterson's quick strikes, Bray connected with a more familiar face, Zach Rogers, on a 72-yard heave, and just like that, the questions about the Vols' potential in the deep passing game dissipated into a fine mist until further notice. Bray didn't throw for another touchdown, but he did finish the night with 332 yards and didn't throw any interceptions, either; at least as importantly in the long run, led more than one extended drive on which he was basically perfect as a passer, which might say more about his progress than the early long balls. Patterson, Rogers and 2011 injury casualty Justin Hunter combined for 253 of those yards on 17 catches, pretty much exactly what Tennessee fans had expected from the strength of the team before Rogers' departure raised the red flags. Or had hoped for, at least.

2. That said, the most satisfying play of the night may have been Rajion Neal's 8-yard charge into the end zone over an N.C. State safety in the third quarter, the capper on a 14-play, 87-yard march that left the Wolfpack on their last legs. Patterson's long gain distorted the overall numbers on the ground, which weren't anything to write home about otherwise: Neal averaged just 2.4 yards per carry, and Marlin Lane just a hair over four per aside from a single, 42-yard breakaway, the only big play from any of the running backs. But for an outfit that's ranked dead last in the SEC in rushing offense each of the last two years, they will take it.

3. Bray wasn't kidding about going after David Amerson "just like any other DB": Both of Bray's long touchdown passes in the first quarter came at the expense of the most hyped cover guy in college football, who was also shown up by Patterson's speed on the long touchdown run. Tennessee spent the next three quarters victimizing Amerson on shorter passes, especially to Hunter, who joins Amerson in the top half of most mock drafts. Based on tonight, he's got some work to do if that's going to be the case much longer.

4. Bray had a solid, efficient night as a passer, putting a somewhat sordid offseason behind him. But whatever else you have to say about him, I'm still not at all convinced he's not going to cause Derek Dooley to snap and murder a random walk-on in a blind, uncomprehending rage at some point this season. Tonight's Moment of Bray: An extremely ill-advised effort to extend the ball over the goal line in the dying seconds of the first half, all but advertising to the defense on a billboard that read ASK ME ABOUT KNOCKING THIS BALL FROM MY HANDS. 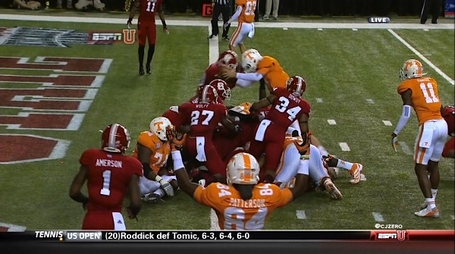 The untimely fumble – Tennessee's only giveaway – cost the Vols seven points and a two-score lead going into the half, which turned out not to matter much thanks to four interceptions from the arm of Wolfpack quarterback Mike Glennon. (Of the two quarterbacks, Glennon was the more disappointing by far.) At some point this season, though, a boneheaded Bray move is going to be the difference in a win and a loss, and when it happens, every hair on Dooley's head is going to spontaneously turn white in that instant.

(At least for tonight, though, after the two years he's been through, no one deserves this picture more than Derek Dooley.)

5. Dear NCAA: Can you loosen that weird uniform rule that prevents more games where both teams wear their home darks, please? Theeeenks!