Your Saturday in Detail: Brian Kelly comes down with another case of cold feet

Share All sharing options for: Your Saturday in Detail: Brian Kelly comes down with another case of cold feet 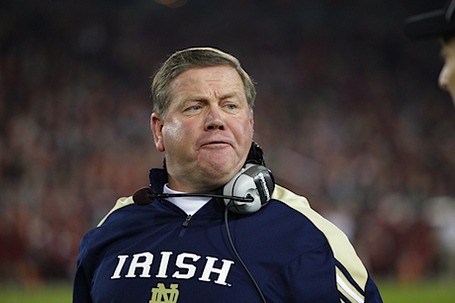 • Expressing concern over his new starting quarterback's nerves, Notre Dame coach Brian Kelly will replace redshirt freshman Everett Golson after a disappointing effort in pregame warm-ups just before kickoff against Navy in Dublin, Ireland, and go on to play no fewer than five quarterbacks over the course of a closer-than-expected Fighting Irish win. "We weren't quite sure what to expect," Kelly will say after the game, exhaling in relief. "Thank goodness that's over, and now we have Tommy Rees waiting for us back home."

• Having dispensed with the ritual "trash talk," Northwestern fans and Syracuse fans will let their guard down, bond over their mutual love of black-and-white photography and decide to leave the Carrier Dome en masse in the third quarter to discuss Dave Eggers' new novel over 38,000 cups of chai.

• Urban Meyer's much-anticipated debut as head coach at Ohio State will be marred when Swoop, the mascot for Miami (Ohio) of Ohio, is shot while attempting to recreate the Ohio Bobcat's 2010 assault on Brutus Buckeye, thereby becoming the first victim of the "Defenders of Brutus," a secret service organization made up of students devoted to protecting the OSU mascot. Swoop will survive, miraculously, but will subsequently remain terrified for the rest of his life of both large crowds and the smell of sulfur. 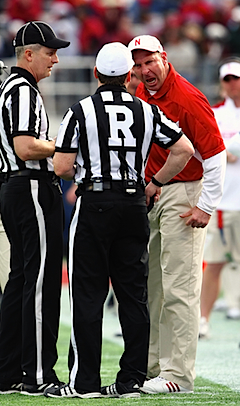 • A furious Bo Pelini will have to be physically restrained by assistants when a wide-open flea flicker resulting in a Nebraska touchdown against Southern Miss is called by back due to an inadvertent whistle when, ironically, a side judge is bitten by an actual flea.

• Hoping to court votes in a critical swing state during the annual Colorado State–Colorado game in Denver, Republican presidential candidate Mitt Romney acquires a controlling stake in Sports Authority Field during an uplifting halftime ceremony, but courts controversy after he inadvertently fires both coaching staffs and all 70,000 fans in attendance shortly after the start of the second half.

• Visibly missing his favorite target, suspended wide receiver Sammy Watkins, and jarred by the variety of blitzes deployed by Auburn's new defensive coordinator, Brian Van Gorder, Clemson quarterback Tajh Boyd will turn the ball over three times in the first half in the Georgia Dome, all leading to Auburn points. Boyd will finish with twice as many total yards as his counterpart, first-time starter Kiehl Frazier, won't be able to lift his Tigers out of the hole in the second half.

• Sophomore quarterback David Ash will take every snap for Texas in an easy Longhorn win over Wyoming, giving fans hope that the ongoing QB duel that marred the 2011 season is finally behind them. The following Monday, coach Mack Brown will name Case McCoy the new starter without explanation.

• Catching Alabama somewhat off-guard with an up-tempo, no-huddle approach out of the locker room, Michigan will score a touchdown on its first series against the Crimson Tide, and subsequently fail to reach the end zone again in a double-digit defeat. Wolverine quarterback Denard Robinson will sit out the following week against Air Force as a precautionary measure while recovering from mysterious internal injuries reminiscent of a python attack.

• In an escalating game of one-upmanship, Gus Malzahn and Chip Kelly will compete between plays to determine which coach will be the first to run a mile, complete his tax return, cook a twelve-course meal, bring a woman to climax, write and perform an all-Allegro composition for string quartet and successfully solve a Rubik's cube during the course of Oregon's lopsided win over Arkansas State. Malzahn will initially be declared the winner, but will later be disqualified when it's discovered he skipped at least the final two-thirds of Galt's speech during the speed-reading of Atlas Shrugged.

• Making good on his vow to go for it on fourth down more often rather than punting, San Diego State coach Rocky Long will stun fans, announcers and much of his own team by opting to go for it on nine different occasions in his team's trip to Washington. The Aztecs' will fail on all nine attempts, lose in a blowout and force Long to resign under pressure on Monday. "I've been around this game too long to forget the first rule you learn on your first day of coaching," he will say at his farewell press conference. "Punting is winning."