For better or worse, South Carolina picks up right where it left off

Share All sharing options for: For better or worse, South Carolina picks up right where it left off 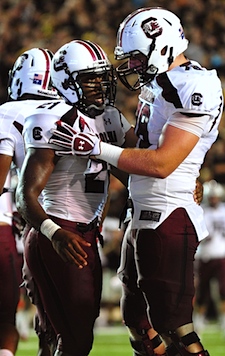 1. It was mostly ugly, yes, especially after a second quarter shoulder injury to quarterback Connor Shaw threatened to render South Carolina's passing game null and void – after sacks, the Gamecocks had more penalty yards (60) than passing yards (44) – but openers against teams that aren't Furman or the equivalent often look like. We won't really be able to judge this effort until we have some idea of how good Vanderbilt is.

Because for a few minutes there, after they kicked a field goal to go up 13-10 in the third quarter, Vandy was on the verge of its first win over a top-ten opponent since 1974. The Commodores largely controlled the game after falling behind 10-0 early, and at no point looked like the scrappy underdogs to the Gamecocks' polished contenders. They looked like they belonged. If South Carolina is anywhere near as good as advertised (and we don't know that, either, with Shaw essentially playing the second half with one arm tied behind his back), then the proverbial "next step" that's eluded Vanderbilt for going on six decades may actually be… I don't want to say within reach just yet, based on nothing but a slightly more-competitive-than-expected loss, but at least not consigned to some fantasy realm for a change. Then again, it's just as likely that South Carolina is not as good as advertised, or that it's just another in a long, long line of moral victories for Vanderbilt that signify nothing at all but a respectable effort on a given night. So: Respect for now, and let's see how the rest of it goes.

Shaw has already said he plans to play next week against East Carolina, by the way, though after the beating he took tonight he may not have been exercising the most credible judgment in the locker room.

2. In his first game back from a torn ACL last year, Marcus Lattimore was sufficiently Lattimore-esque in the box score (26 touches for 131 yards, 2 touchdowns) and on the first touchdown of the season, an impressive 29-yard gallop through the middle of the Vandy defense in the first quarter. He didn't run his way onto any awards lists, either, fumbling the ball away on his first carry of the night and generally looking maybe a half-step or so off his previous form. But when a guy returns from a major knee injury with a 100-yard night in a conference game, you don't quibble with that. Mr. Lattimore is going to be just fine.

That was South Carolina's longest completion of the night, and longest play period if you tack on the 15-yard penalty for gratuitous violence. (Via)

4. Again, Shaw's sore shoulder means the Carolina passing game gets an incomplete for the night. But if there was any one area in which the Gamecocks decidedly did not look like plausible contender for an East Division crown, that was it. With Shaw ailing, backups Dylan Thompson and Seth Strickland combined to complete zero of four attempts, and Shaw's one interception came early, before he went all walking wounded. This is nothing new: The general anemia of the passing game was a recurring theme last year, right from the start, and would have been much more of a pressing issue if not for a succession of bailouts by the defense. The D was there again tonight, but that's not a bet you want to keep making.

5. I'm not going to suggest it cost Vanderbilt the game, but did South Carolina corner D.J. Swearinger interfere with Jordan Matthews on the Commodores' final, fourth-down heave down the sideline? Yes, obviously:

Swearinger was beaten and clearly grabbed Matthews' left arm before the ball arrived, right in front of the official's face, on what otherwise would have been critical completion to put Vandy in position for the (probably) winning touchdown. As it was, it should have been a drive-extending penalty. Instead, the flag stayed in the official's pocket and South Carolina easily killed the rest of the clock.

But I'm sure Mike Slive is going to give him a very stern talking to.