Final Takes: Waiting for the real Georgia, and other compelling questions on the eve of the 2012 season

Share All sharing options for: Final Takes: Waiting for the real Georgia, and other compelling questions on the eve of the 2012 season

Counting down 12 pressing narratives at the start of the 2012 season. Today: Part two. Previously: Part one. 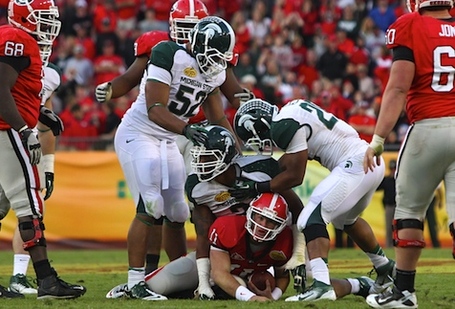 8. How for real is Georgia? Fact: Since opening the season atop both mainstream polls in 2008, Georgia is 2-14 against teams that finished in either poll at the end of the season, including a nine-game losing streak over the last two years. In the same four-year span, the Bulldogs are 0-10 against poll-worthy rivals in the SEC, with seven of those losses coming by double digits. In the course of the ten-game winning streak that propelled them into the SEC Championship Game last year, they only beat two teams (Auburn and Georgia Tech) that managed to finish the regular season with a winning record. So how is it, exactly, that every major poll and virtually every preseason magazine considers an outfit with that track record not only an overwhelming favorite to carry the SEC East, but also a virtual lock for the top ten? 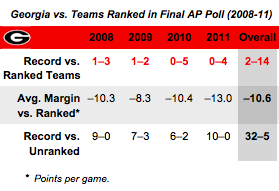 Believers will point to the lineup, which is largely intact and features both a third-year starter at quarterback (Aaron Murray) and arguably the best defensive defensive player in the nation (Jarvis Jones) anchoring one of the best defenses overall. Non-believers have their own explanation: Another cushy conference schedule that's conspicuously missing Alabama, LSU and Arkansas for the second year in a row, as well as newcomer Texas A&M in the cross-divisional divide. Among the other contenders in the East Division, Florida has an early date at A&M and a later one with LSU; South Carolina gets both LSU and Arkansas; Tennessee is at Mississippi State in mid-October before coming home to Alabama. Georgia? The Bulldogs draw Ole Miss and Auburn to close the conference slate in November. Depending on how things go for Florida and South Carolina, UGA could conceivably be back in the SEC title game without even seeing a ranked opponent, much less beating one.

Until then, Georgia's merits as a serious contender – within the conference or nationally – will be impossible to judge. Which is not going to stop anyone from judging them favorably when the wins start piling up, of course, because S! E! C! and all of that, but as long as that goose egg stands against the upper crust, let the buyer beware.

7. How Good is Good Enough for Derek Dooley? Every year, the venerable Phil Steele uses a formula to generate a number for what he calls "Experience Points," the only statistic in existence designed to measure (appropriately enough) a team's overall experience. The most experienced outfit in college football entering 2012? The Tennessee Volunteers, whose long, sordid sojourn though the post-Fulmer/post-Kiffin wilderness has finally yielded a lineup with a lot of guys who have played a lot of football over the last two years. But that doesn't necessarily mean they're suddenly going to be good at it.

To be fair, the last four years in Knoxville – and the last two under Derek Dooley, especially – have consisted of one nut-punch after the other, the latest coming last week with the departure of All-SEC wide receiver Da'Rick Rogers. But whatever reserves of patience fans had ran out right about the same time the clock ran out on a 10-7 loss at Kentucky last November, a humiliating flop that snapped a 26-year win streak over the Wildcats, clinched back-to-back losing records and forced Dooley to admit, "We were headed in this direction all along and just couldn't fight our way out of it." And therein lies the question for year three: Is merely changing the direction of the tailspin good enough to save Dooley's job? Or will he be expected to lead them out of the woods?

And against a schedule that still includes Florida, Georgia, Alabama and South Carolina, what does "out of the woods" look like? Barring an upset in one of those four, the toss-ups on the schedule – N.C. State, Mississippi State, Missouri – are all must-wins, beginning Friday night against the Wolfpack.

6. The Great Denard Debate. It doesn't take a particularly open mind to acknowledge Denard Robinson's prowess as a dynamic athlete, in general, or more specifically as one of the most dangerous runners in the country. Try touting his virtues as a quarterback, though, and it's obvious the guy still has some convincing to do in his final year on campus. 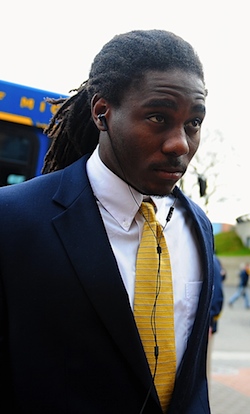 True, some of that skepticism is born of the narrow, one-track perception – reinforced by most of the NFL – that being a great quarterback means being a towering, pocket-bound Peyton Manning clone, which has never been true in the college game. But it's also true that Robinson seemed to regress as a passer last year in the transition from the "spread 'n shred" system he signed up for under Rich Rodriguez and the more conventional stylings of his current offensive coordinator, Al Borges, who likely never would have given Robinson a fair shake if he hadn't already established himself as an All-Big Ten incumbent. His completion percentage and efficiency rating plummeted from 2010 to 2011; his interceptions were up, from 11 as a sophomore to 15 as a junior in fewer attempts. The picks got uglier, too, many of them coming on off-balance heaves that came nowhere near their ostensible targets.

Occasionally, Robinson's successes were just about as unsightly: The game-winning touchdown pass against Notre Dame and both of his touchdown passes in the Sugar Bowl – especially the second one – were essentially jump-ball prayers that his receivers happened to answer with an improbable catch. Many others, they couldn't save.

That was last year. Now, Robinson is a senior with 26 consecutive starts and a full season under his belt in Borges' system, which Borges seemed to tweak a bit to Denard's benefit as the year wore on. But outside of the PlayStation-worthy fourth quarter against Notre Dame and the best passing game of his career (14-of-17, 3 TDs, no picks) against Ohio State, Robinson's arm has never been a reliable asset against a competent defense, and has frequently been a liability. That can't be the case if Michigan stands a chance Saturday against Alabama, or of fulfilling top-10 expectations in the Big Ten.

5. Settling Alabama-LSU. Most of the best rivalries are marked by contrast, cultural or otherwise, even if the alleged differences are more perceived than real. What makes the current tug-of-war between the Tigers and Tide so compelling is that both teams are practically identical: In the age of the up-tempo, no-huddle spread, no other programs outside of Wisconsin have clung so doggedly to the traditional virtues of power running and defense – in very large part because so few of them have the benefit of the over-the-top talent level necessary to pull it off.

Of course, Alabama fans would like to declare the matter settled with January's BCS beatdown in New Orleans, and there is some irony in the fact that the pinnacle of Les Miles' tenure at LSU (so far) came as a result of tapping the remaining strains of Saban DNA in his program. But the fact is, the 9-6, overtime field goal-fest in November was a much better indicator of who and what both teams were in 2011, and the minuscule margins separating them in the preseason polls are an indication of just how close they remain in 2012. The only way the rubber match on Nov. 3 could be any bigger is if the election was riding on it.