Morning Bell: College football is back. So is Marcus Lattimore.

Share All sharing options for: Morning Bell: College football is back. So is Marcus Lattimore. 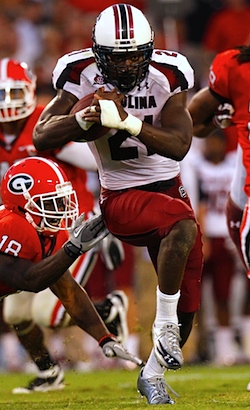 • Give thanks. The best thing about tonight's appetizer between South Carolina and Vanderbilt, other than the long-awaited, blessed return of college football, in general? The return of the best running back in college football, Marcus Lattimore, from the knee injury that cost him the final six games of 2011, but hopefully did not cost him any of his unique combination of power and explosiveness. Before he went down last October, Lattimore was carrying a larger share of his team's offense than any other player in the SEC, and easily rivaled Trent Richardson as the most complete back – rushing, receiving and blocking – in the nation. If this is the most anticipated season in Gamecock history, no part of it is more anticipated than the prospect of watching Lattimore touch the ball 25 times per game, one last time.

Oh: And no Craig James in the booth. Lift your voices in praise, America. [Eye on CFB, Charleston Post & Courier]

• Yeah, that's what Mark Emmert thought. Despite much hand-wringing from the Board of Trustees on down, Penn State has reached a formal agreement with the NCAA and the Big Ten on the terms of the "Athletic Integrity Agreement" that was tacked onto sanctions against the program last month, requiring the university to adopt the recommendations of the Freeh Report and create new positions for an Athletics Integrity Officer and an Athletics Integrity Council in the wake of the Jerry Sandusky scandal. The agreement also calls for independent, third-party oversight of university compliance with NCAA bylaws, a role that will be filled by former senator George Mitchell. [psu.edu]

• No one rides for free. As expected, USC has pulled a scholarship from former walk-on Will Andrew, who gives up his ride to make room for punter Kyle Negrete under the Trojans' reduced scholarship cap. Andrew said Lane Kiffin was up front about the pending numbers crunch – "Coach Kiff was honest with me from the start, so I knew when the time came there was a 50-50 chance" his scholarship would be yanked – and now plans to pay his own way to remain in school and on the team unless incoming freshman Darreus Rogers fails to receive academic clearance by Sept. 14. The cost of tuition, books, fees, room and board at USC can add up to nearly $60,000 per year.

"Anytime that we award a walk-on a scholarship, it is always a one-year situation," Kiffin said on Wednesday. "We don't ever look at it as it's taking one away. [Andrew] was fortunate to have one for a year. That's a fall, spring and summer. That's a lot of money off his parents." [Orange County Register]

• Baptist beatdown. With a nod to Hurricane Isaac, the first college football game of the 2012 season is officially in the books: Division III Ouachita Baptist University broke the seal Wednesday night with a 55-3 rout over Northwestern Oklahoma State, highlighted by four touchdown passes from backup quarterback Benson Jordan. The game, played in Arkadelphia, Ark., was actually moved up in anticipation of Isaac's approach later in the week, and registered an official attendance of 2,754. [obutigers.com]

• I sent my daughter to college, and all she got was this worthless degree. Incredibly, this… 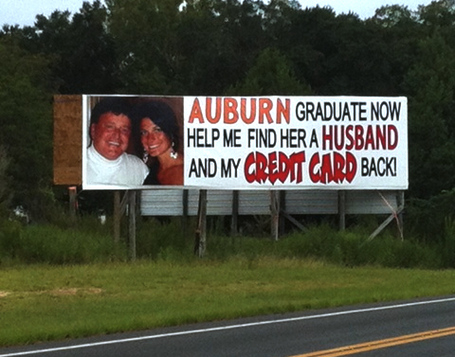 …is not a relic from the Eisenhower Administration, but a thing that actually exists in the year 2012. My guess is a lot of passersby in northern Florida probably think this is very funny. Especially if they happen to be Alabama fans. [Friends of the Program]

Quickly… Colorado's best player decides to call it a season rather than attempt to rush back from a knee injury. … Oklahoma State's leading returning receiver is cited for providing alcohol to a minor. … Greg Reid's depressing summer gets a little worse, courtesy of a torn ACL that will sideline him for the entire season. … East Carolina suspends three wide receivers for Saturday's opener against Appalachian State. … Dylan Favre is named starting quarterback at Pearl River Community College. … Mike Leach says some things. … Robert Weintraub makes an argument to allow promising running backs to skip college and pass directly to the NFL. … Paul Ryan's dogs are named "Boomer" and "Sooner." … And only Georgia Tech would consider introducing new helmets with a nod to entomological geometry.