Brady Hoke walks into a bar

Share All sharing options for: Brady Hoke walks into a bar 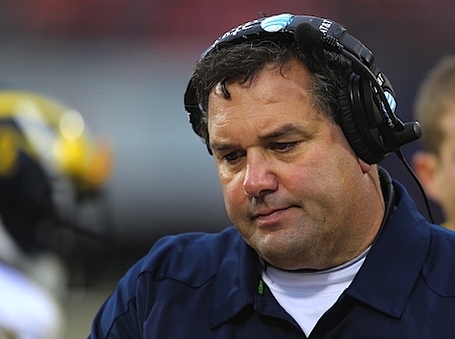 "…These days, I still listen to music — country, classic rock, all kinds of stuff — but what I like most is all the old vinyl I have from the '70s. …To this day, those records are the ones I still listen to: Hall & Oates, early Stones, REO Speedwagon, Aerosmith. I love Hall & Oates. 'Rich Girl' and 'Sarah' can bring a tear to my eye." – Brady Hoke on his favorite music.
- - -

The burly man ducked in from the rain, took off his coat and took his usual stool at the far end of the bar. He tousled his soaking hair and waited to catch the bartender's eye. He didn't have to wait long.

"Long time," the bartender said with an air of guarded familiarity that required no response. He arched his eyebrows. "The usual, then?"

The man nodded, and watched the libations fill his glass with a quiet focus he knew would probably be mistaken for solemnity. He didn't care. When the bartender handed him the drink, the man swirled the liquid several times, ritualistically, held the glass to his nose for a moment and took a brief but satisfying sip. He swirled the glass a little more and stared at it for a long time before taking a second. Then he tilted his head back and downed the rest in one swift gulp.

The glass returned to the bar with unintended force. The bartender seemed startled by the sound, briefly, but dutifully returned with a refill. When he was done pouring, he studied the man again, waiting for him to pry his eyes from the glass, and met his gaze with one inquisitively arched eyebrow. The man surveyed the other patrons but said nothing. Then he turned back to the bartender, closed his eyes and nodded, once, slowly and with great purpose.

The bartender returned the nod, made his way to a small, worn out jukebox on the opposite end of the bar. He pushed a few buttons, quickly and deliberately, proceeding directly to his choice. He pushed another button, then shuffled back to his station. After a few seconds, the music began to play.

The man stared ahead from his stool as the notes descended on him like the sheets of rain he'd just stepped out of, only softer, and sweeter smelling, like some happy scent he vaguely recalled from many years in the past, but could not quite place. He rhythmically clenched and unclenched the muscles in his jaw until he could hold it in no longer. The sob came at once, emerging as a sudden whimper that he attempted to force back into his throat with his fist, then swallow whole. He sat for several minutes like that, his eyes clenched shut, his hand covering his mouth, his breaths coming in short, irregular spasms. His mind wandering back. Much, much too far back.

When he opened his eyes, he saw the bartender studying him ruefully while cleaning a glass with a small towel. The man straightened on his stool, blinked rapidly and cleared his throat. "I'm sorry, you know, about this," he stammered. "You have other customers and I'm always–"

The bartender stopped him, holding up his hands reassuringly. "Don't even worry about it," he said. "The guy who was in here before you, you wouldn't believe what made that guy start to mist up. No, this…" He trailed off for a moment, listening, then shrugged, put the glass in its place and started back toward the other end of the bar. "This is kinda nice."

The burly man laughed silently and followed the bartender to his next customer out of the corner of his eye. It's funny, he said to himself, as it dawned on him that they'd never bothered to exchange names. But somehow, it was better this way. He didn't need to know. He stared into his glass and traced his finger slowly around the edge.

"Thank you for making me feel like a man," he said.