Morning Bell: The streets of Madison are safe from Montee Ball's assailants

Share All sharing options for: Morning Bell: The streets of Madison are safe from Montee Ball's assailants 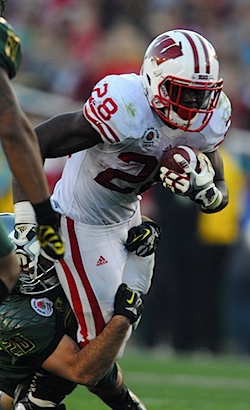 • Free the Montee Ball Three! (Upon proper payment and documentation of appointed bonds.) Madison police arrested three men Tuesday accused of assaulting Wisconsin running back Montee Ball earlier this month, apparently in retaliation for a previous fight involving other Wisconsin players that left at least one person hospitalized. The suspects, all 21 years old, have not been formally charged but will likely be hit with some version of battery for the attack, which sent Ball to the hospital with a concussion and subsequently kept him out of the start of preseason practices.

For his part, Ball has repeatedly denied any involvement in the initial fight that may or may not have provoked the attack on him, and detectives say they have no evidence to the contrary. If Badger players were involved in that incident, they have not been charged, disciplined or otherwise identified in any public way. [Associated Press]

• Catch a Tiger by the transcript. Two likely LSU starters, tailback Michael Ford and linebacker Tahj Jones, are appealing to the NCAA to escape academic limbo in time for Saturday's opener against North Texas, for which both are currently ineligible. Ford led a crowded backfield last year with 756 yards rushing, but was listed third on the most recent depth chart, behind Kenny Hilliard and Alfred Blue; Jones, a regular off the bench in 2011, is currently listed behind fellow junior Luke Muncie. There's no timetable for a resolution in either case. [Times-Picayune]

• Bulldog blues. According to an FOIA disclosure requested by the Northeast Mississippi Journal, at least one Mississippi State booster has been disassociated from the program in the course of an ongoing NCAA probe focusing on MSU's recruiting practices in Memphis. (Or, if you work for MSU public relations, in the course of a cooperative effort to "examine a potential recruiting irregularity.") This is the same "irregularity" that led to the abrupt resignation of wide receivers coach Angelo Mirando last week, citing "unforeseen personal issues," and now appears to center on at least two former Memphis-area prospects, neither of whom is currently at Mississippi State.

The rogue booster in question has been booted from the school's "Bulldog Club" amid allegations of "impermissible contact with the prospective student-athlete," with the additional caveat that "other violations of NCAA rules may have occurred." In NCAA parlance, membership in an official fundraising arm such as the Bulldog Club would make the booster a recognized "representative of Mississippi State's athletic interests," which could potentially have very ominous results for Mississippi State, depending on how Mark Emmert feels about the case on a given morning. [Northeast Mississippi Daily Journal, Memphis Commercial Appeal]

• Billboard gnomes strike again. Earlier this week, USC fans in enemy territory enjoyed a not-so-subtle shot at the Bruins, courtesy of a billboard featuring a certain Trojan quarterback just around the corner from UCLA's Westwood campus: 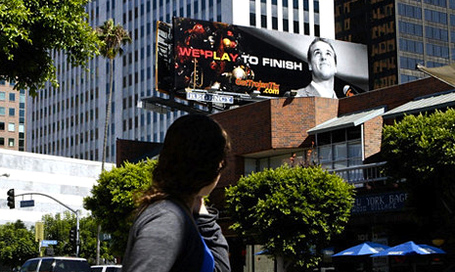 That shot was taken on Monday. By Tuesday, the entire board had been blacked out for obvious reasons that all interested parties would openly acknowledge in a transparent public forum. Aaaaaand cue interested parties:

"We didn't have anything to do with it," UCLA athletics spokesman Nick Ammazzalorso told the Times.

USC, in a fit of guilt over their ungentlemanly behavior towards their L.A. neighbors?

"We did not agree with or were we involved in the decision to take the billboard down," USC athletics spokesman Tim Tessalone said.

The billboard company, then? Unlikely, with Regency Outdoor Advertising co-owner Brian Kennedy a "prominent USC donor," per the Times.

So there you have it: The lovely but virtuous coeds of UCLA no longer get to stare longingly at the face of the best quarterback in the city, and one knows anything about anything. I love L.A. [Eye On CFB, Los Angeles Times]

Quickly… If you were still wondering, Seantrel Henderson won't travel with the team for Miami's opener at Boston College. … Recently reinstated Cal linebacker Cecil Whiteside made it all the way back from an offseason suspension, only to be declared academically ineligible . … Baylor, still in need of all the help it can get against the run, loses a starting defensive lineman for the entire season. … TCU loses an offensive lineman to academics. … Bryan Bennett sounds like he plans to stay put as Oregon's backup quarterback. … USC plans a tribute to Junior Seau before its season opener, with commemorative wristbands. …And nothing but good things can happen to you when your starting quarterback is named "Munchie Legaux."