Final Takes: Logan Thomas, Atlas? And other compelling questions on the eve of the 2012 season

Share All sharing options for: Final Takes: Logan Thomas, Atlas? And other compelling questions on the eve of the 2012 season

Counting down twelve pressing narratives as kickoff closes in. Today: Part one. 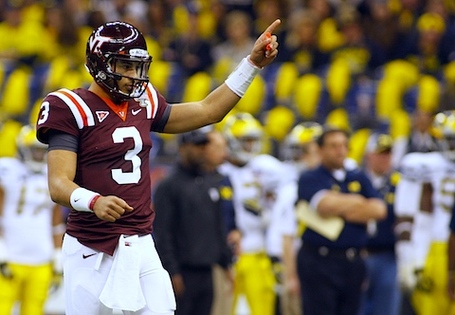 12. Logan Thomas Carries That Weight. (Or Does He?) This is not a fact, like, confirmed by physics or something, but for the sake of argument, let's say Virginia Tech's Logan Thomas is the most physically gifted quarterback in college football. Physics or no, that's not straying too far out onto the limb: At 6'6", 250-plus pounds, Thomas is already a favorite of mock drafts and pro scouts and talking heads who pretend to be pro scouts, who take one look at his combination of size, arm strength and speed and instantly see a Newtonian body – that would be a reference to, uh, Cam, not Isaac – that vastly exceeds the specifications of a "prototype" and can be molded into a true force of nature. Let's say that guy is Virginia Tech's quarterback. What does that mean for Virginia Tech's offense?

Because in many ways Logan Thomas is Virginia Tech's offense, or at least the only part of it we know much of anything about. While he was breaking the school's single-season record for total offense in 2011 as a first-year starter, virtually all of his fellow starters this fall were watching from the bench, or from the stands as recruits: The heart of last year's attack left with All-ACC tailback David Wilson and four veteran starters on the offensive line, and made off with both of Thomas' favorite targets for good measure. The remainders include only one offensive lineman, center Andrew Miller, who has started a college game, and zero healthy tailbacks who have set foot on a college field.

That leaves Thomas, a next-level übermensch stuck in a system that has been known to consider "paleolithic" a compliment. If Thomas is on his way to being all it seems he can be, how far does that take a team that relies so heavily his arm and legs? And the more sobering question for the Hokies: Where does that leave them if he's not?

11. Yes, Virginia, Oklahoma State Has a Defense. There is no honest way to argue that Oklahoma State was actually good on defense last year, given some of the unsightly sums it yielded en route to the best season in school history. But it wasn't nearly as bas as it looked on paper: OSU routinely gave up huge chunks of yardage and occasionally points after running out to a big lead, effectively as a less boring method of running the clock out. 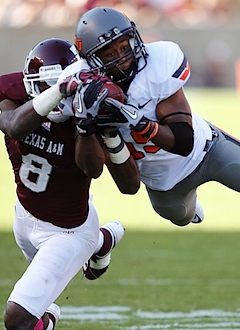 Down 20-3 at the half at Texas A&M, the Cowboys forced three turnovers as part of a 27-0 run over the final two quarters; against Baylor, they forced Robert Griffin III into three giveaways and led 49-3 at the start of the fourth. Against Oklahoma in the regular season finale, they harassed OU quarterback Landry Jones into the worst night of his career in a 44-10 bloodbath, the Sooners' only touchdown coming in garbage time after Jones had left the game. Carpet-bombing raids by pass-happy Arizona and Texas Tech netted a grand total of 20 points between them. For the year, Oklahoma State took the ball away an incredible 44 times, making it the first defense to collect more than 40 takeaways in a season since 2003.

You probably didn't hear much about any of that, because so much of the attention – understandably – was focused on the weekly destruction waged on opposing secondaries by the Cowboys' nuclear offense. And it will be this year, too, but for an entirely different reason: Instead of a record-breaking 28-year-old pulling the trigger at quarterback, it will be an untested 18-year-old, Wes Lunt, who will have the benefit of Brandon Weeden's favorite safety blanket, departed All-American Justin Blackmon. Even a very good effort by the offense by normal standards – say, 38 points on 450 yards per game – looks like a huge step backwards compared to the Weeden-Blackmon bonanza over the last two years. If the defense can't close the gap, we'll be saying the same about the final record.

10. Boise State hits reset. No one needs another retrospective of the charmed college life of Kellen Moore, winningest amateur quarterback in history and noted timber gnome of the Palouse, so let's talk about everyone who is no longer playing for Boise State. The winningest senior class in college football history supplied 17 full-time starters last year, leaving the 2012 Broncos with (by Phil Steele's count) fewer returning starters than any other team in the nation. Besides Moore, Boise is losing its leading rusher, its leading receiver, four starting offensive linemen, nine of its top ten tacklers on defense and all eight of its All-Mountain West picks. On defense, the only returnee who started more than half of the Broncos' games in 2011 is cornerback Jamar Taylor.

And yet virtually no one, anywhere, expects the the Broncos to endure (much less exceed) as many as three losses this year, the same number that Moore lost in four years, and it's not because they've met the steely, determined gaze of Joe Southwick and come away impressed by the cut of his jib. They're buying into the Boise brand, essentially sight unseen this time, against a schedule that will probably still ensure a double-digit spread in every game save Friday night's opener at Michigan State. 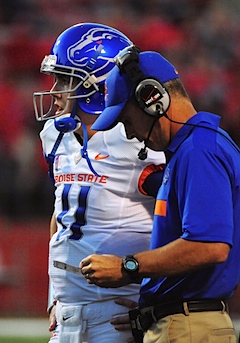 Boise State didn't come charging out of nowhere when it handed the reins to Kellen Moore in 2008. Two years earlier, the '06 Broncos had stunned Oklahoma in the Fiesta Bowl to sew up an undefeated season; two years before that, they had ripped off 22 consecutive wins before being denied a perfect record in a close, dramatic loss in the 2004 Liberty Bowl. Before Moore ever stepped on campus, Boise had won five consecutive WAC championships and finished in the top 20 of the final polls four times in the preceding five years, and Chris Petersen was already one of the most sought-after coaches in the country. If the Broncos' fate hinges on any one person, it's not Kellen Moore.

If it hinged on 17 guys who came up playing a ton of football together in an immaculately well-oiled system, then we might begin to see a crack or two in the facade.

8. Quarterback Blues. Florida and Texas don't have much to do with one another, historically – the Gators and Longhorns have only played three times, the last one in 1940 – but their stories over the last five years are the same story. In 2008 and 2009, they were juggernauts, personified by their popular, clean-cut, Hall-of-Fame quarterbacks; by 2010, the bar was set so high that a "rebuilding year" still meant starting the season ranked in the top ten. What it really meant, sans Tim Tebow and Colt McCoy in the shotgun, was a wholesale collapse of both offenses, depressing losing streaks and a lingering identity crisis that sent tremors rippling through both programs, beginning with the coaching staffs. 2011 was for starting over and planting seeds with two of the greenest lineups in college football.

Those efforts will pay off this fall with a pair of vintage-looking defenses and no shortage of interesting options in the cupboard on both offenses, if not any actual stars just yet. (We're all looking at you, Malcolm Brown.) But both camps know full well that until they settle on one steady, competent starting quarterback, they're only staving off the next collapse. Texas, at least, is making a credible show of naming David Ash as its full-time starter, even if it doesn't seem very committed to the idea until Ash does something to play Case McCoy out of their coaches' minds. Florida coach Will Muschamp isn't even bothering with the pretense that there's a clear leader between sophomores Jacoby Brissett and Jeff Driskel, vowing to rotate both on a quarter-by-quarter basis until one or the other emerges.

In the meantime, these are two championship lineups just waiting for some kind of spark to ignite.