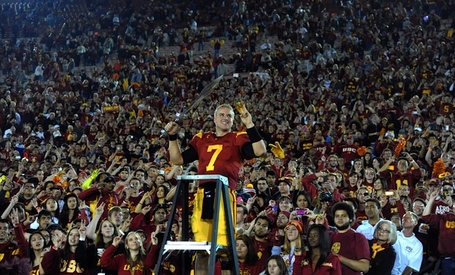 Now in its eighth year, the College Football BlogPoll is a weekly effort of dozens of college football-centric Web sites representing a wide array of schools under the oversight of SB Nation. It’s an effort to provide a more rigorous check on the mainstream polls that actually, like, count toward the mythical championship, as well as a forum where all biases are shamelessly flaunted like big, stupid, full back tattoos of Bear Bryant. But mainly, it’s fun.

For the preseason ballot, schedules were strongly considered in an effort to predict the landscape at the end of the regular season: This is not a power poll.

The votes in both the Associated Press and Coaches' polls resulted in, effectively, a three-way tie at the top between LSU (No. 1 according to the coaches, before the great tribulation of Tyrann Mathieu), Alabama and USC (No. 1 on the writers' ballots, post-Mathieu). Which sounds about right.

I do apologize for not descending from the clouds with a clap of thunder and a tablet emblazoned with the name of the One True Champion, but if you're looking for some clera way to separate any one of this year's "Big Three" from the others before they've set foot on the field, you may as well be… I dunno, trying to teach a cat to ice skate or something. The ground is not that firm.

USC is loaded on offense, yes, thanks to the most hyped quarterback and arguably the best set of receivers in America, but the Trojans are also dealing with an almost entirely rebuilt defensive line and limited depth almost everywhere due to an NCAA-imposed scholarship crunch. LSU is loaded on both lines of scrimmage, and may actually be better off with a new, stronger-armed quarterback, but it's also replacing a pair of All-American corners on defense and lacks a reliable big-play threat on offense. Alabama returns a competent, veteran starter at quarterback and still boasts the most blue-chip depth chart in the country, top to bottom, but so much of that talent – especially on defense – is new and unproven. No team replaces five first and second-round draft picks with a snap of its fingers and a fat rating from Rivals.com.

So I'm not going to give you the hard sell on USC as a resurgent juggernaut. (Anyway, after the Trojans' late surge last November, the ongoing presence of Matt Barkley, Robert Woods and Marqise Lee speaks for itself.) But I will join the consensus that sees the eventual championship game as a collision between the survivors of the USC-Oregon showdown in the Pac-12 and the Alabama-LSU tilt in the SEC, both of which happen to be scheduled for the same day, Nov. 3. So let ESPN start working up the storylines and graphics for "Semifinal Saturday," and let the winners there take all.*

• Opportunity costs. Looking at them on paper, or in any other sense, I have to say that Florida State, Ohio State and Virginia Tech do not strike me as top-10 teams, and Wisconsin and Georgia are borderline for very different reasons. (Wisconsin is replacing half its starting lineup; Georgia's record against quality competition over the last four years is pathetic.) Aside from Wisconsin, though, which has earned the benefit of the doubt after back-to-back trips to the Rose Bowl, three things all of those teams have in common: a) A returning starter at quarterback who should be tangibly better in 2012 than in 2011, b) A nasty defense that can pick up some slack even if he's not, and c) A basically manageable schedule.

For the second year in a row, Georgia takes point c) by a landslide, this time without even having to deal with anyone remotely as imposing as Boise State before getting to the conference schedule. There, like last year, the Bulldogs manage to miss Alabama, LSU and Arkansas, as well as Texas A&M. Among the other contenders in the SEC East, Florida has an early date at Texas A&M and a later one with LSU; South Carolina gets both LSU and Arkansas; Tennessee is at Mississippi State in mid-October before coming home to Alabama. As usual, Steve Spurrier is right: Regardless of what happens head-to-head, if Georgia avoids a late stumble at Auburn, the cross-division schedule has basically spotted the Bulldogs at least a half-game advantage before the season even begins, and we may have no idea how good they really are until the SEC Championship Game.

• Consider the bar raised. That's not the case with Michigan, the team I like least compared to its lofty rankings elsewhere, in large part because of the schedule: The Wolverines open up Saturday as double-digit underdogs to Alabama, which is only the first and most notable example of how this year's schedule figures to be much harsher on Michigan than last year's. The other obvious example is at the end of the schedule, against a dramatically improved Ohio State outfit in Columbus, which figures to look nothing like the beleaguered Buckeyes that came to Ann Arbor last November; in between, two of the Wolverines' toughest home wins in 2011, over Notre Dame and Nebraska, are both road games in 2012. For a team that may have played a little bit above its head last year to begin with, another 10-win regular season would be a feat.

• Hope you packed your parachutes. TCU has had rough offseason, and opens its first year in the Big 12 with more major question marks – in the secondary, on the offensive line – than any Gary Patterson-coached team has faced in many years. Just keep that in mind when the Horned Frogs are streaking toward 7-0 against a backloaded schedule that saves all of the heaviest hitters for the final stretch: Beginning in late October, the degree of difficulty shifts dramatically with Oklahoma State, West Virginia, Kansas State, Texas and Oklahoma in a row over the last five games. Going into that stretch, the Frogs may be luxuriating in the top ten with darkhorse BCS buzz beginning to swell; coming out of it, they may be lucky to be ranked at all.

- - -
* Unless, of course, the winner of the blockbuster USC-Oregon game in the regular season goes down at the hands of the loser a month later in the Pac-12 Championship Game, in which case we know SEC fans will completely sympathize.