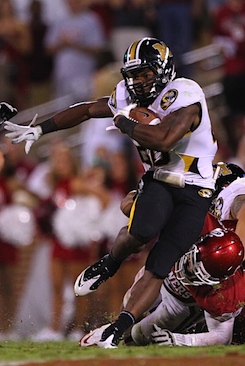 • Get well soon. Missouri tailback Henry Josey, a first-team All-Big 12 pick in 2011 despite missing the last five games to a "one in a million" knee injury, will now be forced to sit out the entire 2012 season due to the same injury. Josey was already over 1,100 yards rushing on a staggering 8.1 yards per carry when he ruptured his ACL, MCL and patella tendon last November, a devastating combination that required an initial surgery at the time and a second in the spring.

The good news: Coach Gary Pinkel told reporters Josey is healthy enough right now to run 100-yard sprints, and vowed "He will be back" in 2013. In the meantime, the majority of carries will be split between senior KenDial Lawrence and quarterback James Franklin, who contributed nearly 1,000 yards rushing last year himself. Eye On CFB, @Dave_Matter]

• Say my name. After six years of steady bitching from writers and fans – and apparently from coaches, too, behind the scenes – the NCAA is funding another rebranding initiative to ditch the cumbersome designation of "Football Championship Subdivision" for the division formerly known as I-AA. Do not expect the name to be reverting back to I-AA, which small schools found objectionable enough in the first place to force the change to "FCS" in 2006, but you may rest assured knowing that many of the schools who bear the label don't like it any more than you do.

"Quite frankly, our level of football continues to have an identity crisis," said Patty Viverito, commissioner of the Missouri Valley Conference. "Football Championship Subdivision is a mouthful, and it doesn't make the case for our Division I stature really much better than the I-AA moniker did. We've tried to fix this for years. It's a dilemma." [Associated Press]

• Dyer: Straight? Having already been nudged out of Auburn, dismissed by Arkansas State and preemptively rejected by Prairie View A&M, former All-SEC tailback Michael Dyer will instead spend the next semester at Arkansas Baptist College, a junior college in his hometown of Little Rock. According to the school's president, Dr. Fitzgerald Hill, Dyer will work toward an associate's degree but will not suit up for the ABC football team, theoretically preserving two years of NCAA eligibility if he can catch on with another school next year. If you think he's not going to be submitting his name to the NFL Draft next spring, though, then Mike will have some of what you're having. [Eye on CFB]

• Actually, we just really hate Neil Diamond. Like many crowds, Penn State fans have turned a communal rendition of "Sweet Caroline" into kind of a thing at Beaver Stadium…

Unlike many crowds, however, Penn State fans now have at least 45 very good reasons to feel something other than lighthearted, collective joy while belting out a chorus that includes the line "Reaching out, touching me, touching you." Which may explain why the school has just dropped "Sweet Caroline" from the Beaver Stadium playlist this season.

For the record, Penn State clarified Monday that the playlist was merely being updated as a matter of course, and "Absolutely no song changes were made based on lyrics." So maybe we should give them the benefit of the doubt and just assume someone there has decent taste in music. [Altoona Mirror, @MinkNate]

Quickly… Purdue suspends a starting linebacker following a probation violation. … Southern Miss names its starting quarterback for Saturday's opener at Nebraska. … Florida's dueling quarterbacks will alternate by quarter until someone distinguishes himself. … Backup QB Tavarius Bender left Kansas State "maybe a couple weeks ago," and some reporters just noticed. … Oregon is offering a Groupon deal to unload tickets for its opener against Arkansas State. … Da'Rick Rogers was introduced to Tennessee Tech by his former high school coach. … SEC fans will see more replays on video boards. … Erin Andrews looks weird on FOX. … And noted Chick-Fil-A aficionado Cassanova McKinzy poses for a photo with a Chick-fil-A cow.