Butch Jones is the first new coach in decades who has to confront the fact that, under present conditions, it is hard to win at Tennessee

1. I never got to write a proper obituary for the Derek Dooley administration, which is fitting, actually, for a tenure that often seemed like one long, loopy funeral procession. Even at the time, most of what I've written about Tennessee Football since January 2010 felt like a piece of a three-year dirge.

That wasn't only the case at the end: From the beginning, Dooley had all the marks of an earnest but overmatched captain who just happened to be the only guy who stepped forward to steer the ship through a hurricane. He was an on-the-fly, fourth-choice hire, better known for his last name than as a sought-after candidate in his own right, left to hold together a recruiting class that was still being wooed by the outgoing staff. Within days of his first spring practice, the team's most high-profile player and only experienced offensive lineman were on their way out, followed by the only experienced quarterback on the roster. Dooley's first summer was highlighted by a wild bar brawl involving at least eight players that left a patron bloodied and bruised and an off-duty cop unconscious in the street. 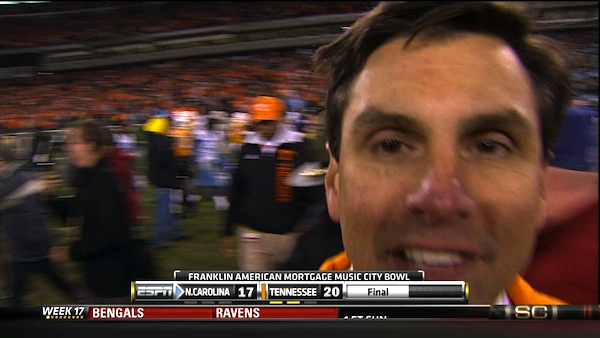 2. Two months later, Dooley's second game in Neyland Stadium was the most lopsided home loss in school history. Not just once, but twice that season, the Vols rushed the field in apparent triumph after watching an opposing offense butcher the final seconds of a two-minute drill in a stunning, chaotic lapse as the game clock expired, only to be called back from the celebration to have defeat snatched from the jaws of victory. At one point, the starting offensive line was manned entirely by underclassmen; later, the starting quarterback job was handed over to a true freshman. By the time Dooley signed his first full recruiting class, the much-hyped 2009 crop assembled by his short-lived predecessor – and that should have formed the cornerstone of Dooley's second team in 2011 – was up in smoke.

Unlike his predecessor, Dooley was a likable, sympathetic enough guy that for two years, the Vols' dismal record was belonged to the circumstances – youth, attrition, relentless schedule – rather than the coach. If there was a single moment when that changed, it was in the last game of his second season, a 10-7 loss at Kentucky that forced Dooley himself to admit, "our biggest fears were realized." Tennessee had just lost to a reliable November whipping boy for the first time in 27 years, assured its first last-place finish in the SEC East and clinched back-to-back losing seasons for the first time in a century. For the first time Dooley had lost the benefit of the doubt. The 2012 team was entirely his own, immune to the excuses that followed the departures of Phillip Fulmer and Lane Kiffin, and limped to the finish line as the worst in Knoxville in at least 50 years. 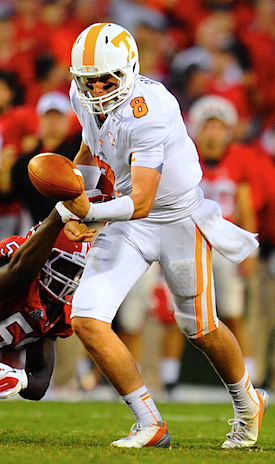 3. That's another way of saying the 2012 team is the one that extended the decline of one of the SEC's most stable, bankable programs beyond the Fulmer/Kiffin spiral, from a temporary slump into a defining malaise. Dooley's Vols of 2011-12 were not only worse than the 5-7 flop that got Fulmer fired in 2008 – they were much further behind the pack relative to their peers. In 2008, Tennessee was outscored in SEC play by 2.5 points per game; in 2012, the average margin was 9.2 points, including a humiliating, 41-18 collapse at Vanderbilt in Dooley's last game. The defense finished dead last in the conference in both yards and points allowed. Tennessee hasn't played for an SEC championship since 2007, finished in the top ten since 2001 or played in a BCS bowl since 1999. High school recruits in 2013 remember none of the above.

4. Like Dooley three years ago, Butch Jones was at least the fourth choice for the job, following surprisingly public rebuffs by Jon Gruden, Mike Gundy and Charlie Strong, and those are only the ones we know about. Unlike the search that produced Dooley, this one did not get a late start in January, a few weeks before signing day. Dooley's ouster was announced on Nov. 18, and was obvious to everyone at least two weeks before, when his team gave up 721 yards in a narrow escape against Troy, a double-digit underdog from the Sun Belt. What all of those would-be targets saw when they looked at Tennessee is not just a proud program temporarily down on its luck: Beyond the prestige of the "Power T," they saw a program that faced as steep an uphill climb as ever re: the absence of a reliable in-state recruiting base, and has been steadily ceding ground in that climb to South Carolina, especially, as well as Arkansas, Clemson, even North Carolina. (UNC coach Larry Fedora is another reported target who may, or may not, have backed out after interviewing.) And suddenly there are more peers: Westward expansion has added two new taps to an already crowded pipeline, one of which, Missouri, is less than a year removed from signing the No. 1 recruit in America; the other, Texas A&M, just produced the Heisman Trophy winner a few weeks after upsetting the No. 1 team in America. Tennessee hasn't beaten a team ranked in the top 25 in three years, or a team that finished there in five.

5. And so the burden falls on a grown man named "Butch," who is willing to call a program in extended, existential crisis his "dream job." Jones has been a winner at his previous stops, Central Michigan and Cincinnati, but in the context of a coaching search defined by rejection, his apparent enthusiasm for the project qualifies as a credential in and of itself:

Butch Jones went the extra mile to get the Tennessee football coaching job.

Actually, he went the extra 83 miles. That's the driving distance from Cincinnati, where Jones previously coached, to Lexington, Ky., where he met UT Athletics Director Dave Hart for an interview.
[…]
"It was not 20 minutes into our conversation that lasted through the night that I could see genuine passion," Hart said at a press conference on Friday afternoon. "It wasn't artificial when he said, 'Dave, this is my dream job.' I knew that was coming from his heart."

At the same press conference, Jones cited Tennessee's facilities and instantly recognizable, "national brand" as major assets, which is certainly true compared to, say, Central Michigan and Cincinnati. The reality he faces is a division in which equally accoutered Florida and Georgia have just surged back into the national elite after short-lived crises of their own, and South Carolina continues to prove its staying power. The Volunteers also gets the short end of the stick in cross-divisional scheduling, thanks to a guaranteed date with Alabama every October. Butch Jones is the first coach to arrive in Knoxville in decades who has to confront the undeniable fact that, under present conditions, it is hard to win at Tennessee, at least on the level Tennessee has traditionally expected. Those conditions are not going to get any friendlier in the foreseeable future.

Which is not to suggest progress is impossible; to some extent, after two conference wins in two years, it's inevitable. But even more so than usual, it will have to be measured step by step in an unforgiving environment, each one a little steeper than the last.