Ask not for whom the Bielema tolls

It tolls for the B1G

Share All sharing options for: Ask not for whom the Bielema tolls

The SEC can claim every championship, dominate every bowl and obliterate every attendance record. It can squeeze every last stinking cent from television networks. If you want to mark the precise moment the Confederate flag was planted on the back of the lumbering, wheezing remnants of the Big Ten, this is it.

It's not just, like, wow I didn't see that coming. By any prevailing assumption about what motivates a coach to move from one job to another job, Bret Bielema to Arkansas makes no sense. If you could convert those assumptions into some kind of equation, this move would amount to less than zero. It makes negative sense. Bret Bielema is a Big Ten lifer: Born in Illinois, played at Iowa, graduated from Iowa, coached at Iowa, has an Iowa tattoo on his leg. His mentors were Big Ten lifers. Hayden Fry recruited and coached Bielema as a Hawkeye, gave him his first job as a graduate assistant and promoted him to his first full-time job. He coached at Wisconsin before he was promoted to replace his outgoing boss, Barry Alvarez, by his outgoing boss, who remained his boss for several more years. 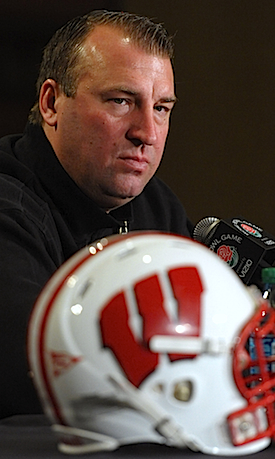 And of course, he won at Wisconsin. Hell, he won big at Wisconsin, which is not exactly a given, historically. With Saturday's grisly splattering of Nebraska in the Big Ten Championship Game, the Badgers are on their way to their third consecutive Rose Bowl as conference champions. Only one other Big Ten coach (Kirk Ferentz at Iowa) has been at his current school longer. His vintage, between-the-tackles philosophy has paid continued paying off in Madison – and pretty much only in Madison – with an offense that consistently ranks at or near the top of the conference and turns random three-star farm boys into colossal NFL draft picks on an annual basis. He's under contract for more than $2.5 million a year through 2017. Right now, with Ohio State and Penn State in flux and Nebraska and Michigan still clawing their way out of the Dark Ages, Bielema's program is the Big Ten gold standard for stability and traditional Midwestern muscle.

Bret Bielema has no professional connection to Arkansas or the South. Arkansas has never won anything in the SEC. It is much further behind its peers than Wisconsin in terms of resources and recruiting base. The Razorbacks' last three head coaches have all been fired under increasingly sordid circumstances. Crazy Wisconsin fans have a beer or six too many. Crazy Arkansas fans come after your phone records.

So what, he's bored earning millions of dollars for winning championships and going to the Rose Bowl? No. At age 42, the only reason Bret Bielema would leave Wisconsin for Arkansas, the single factor that could conceivably convince him to leave the most stable, enviable seat in the conference that raised him, is that he considers a middle-of-the-pack SEC job a step up from the top of the Big Ten. No doubt he'll frame the decision as " a new challenge," or something along those lines, but implicit in that is the assumption that it will be a greater challenge. That getting Arkansas to the top – over Alabama, LSU and now Texas A&M in the division, and Florida, Georgia and South Carolina in the other – is the next logical step for someone who has proven his mettle against Ohio State, Michigan and Nebraska. From rubbing shoulders with Meyer, Hoke and Pelini to chasing recruits with Saban, Miles and Spurrier. Yessir, Bret Bielema is moving up in the world.

Here is a coach who took his current job in a year, 2006, defined largely by the Big Ten's strength: Ohio State spent the entire regular season rank No. 1, Michigan spent most of its ranked No. 2, and the conference took concrete steps toward making its nascent game-changer, the Big Ten Network, a reality; it was so crowded at the top, there wasn't even room for the 11-1, 6th-ranked Badgers in the newly expanded BCS. Six years and eight BCS losses later, Bielema just saw 12-0 Ohio State ignored in the Associated Press and computer polls not only because of NCAA sanctions, but also (perhaps mainly) because of questions about its schedule in a league plagued by its reputation for inveterate weakness. Five times in seven years, an SEC team has made the BCS Championship Game with at least one loss, a practical impossibility in the Big Ten.

Under the new playoff format en route in 2014, the SEC has a very good shot at placing two teams in the four-team bracket almost every year; had the same format been in place the last two years, the Big Ten would have placed zero. The SEC just added a team that can reliably fill an 80,000-seat stadium, won 10 games in its first year in the conference and is about to produce the first freshman Heisman winner. The Big Ten just added Maryland and Rutgers and pledged to bail out their foundering budget sheets.

For a coach whose ultimate goal is a national championship, the SEC is the conference that offers that opportunity – even, apparently, at a school that has not come close to a national crown since in two decades in the fold. If Bret Bielema is grasping at straws to get out of the Big Ten, who is trying to get in?