In the final edition of the season: A tale of two quarterbacks in Miami, a defense of NIU in the Orange Bowl, and which Wisconsin shows up in Pasadena?

In a perfect world, the Bowl Championship Series would not exist, and it can't go away fast enough. Until it does, though, we still live in the world we live in. So each Sunday night we examine what the new BCS numbers mean for the rest of the season. Rooting interest: Chaos. Always chaos.

•Inevitably, Alabama is going to open up here as roughly a touchdown favorite, which suggests either a) Oddsmakers think the Irish are going to be shut out, or nearly shut out; or b) That is quite an endorsement for the Alabama offense. Seven of Notre Dame's twelve opponents in the regular season did not score an offensive touchdown, including Michigan, Miami and Stanford (the Cardinal's sole expedition to the end zone in South Bend was undertaken by the defense), and only Purdue, BYU and Pittsburgh managed to score two. In five games against teams that were ranked at any point this season, the Irish allowed a grand total of two touchdowns and 48 points. So seven to ten points, against Notre Dame, is quite meaningful.

On the other hand, it is still much easier to endorse Alabama's offense under pretty much any circumstances – the Crimson Tide are averaging more than 38 points per game, almost 12 more than the Fighting Irish – especially after their dominant second half on the ground in Saturday's win over Georgia. Presumably, the M.O. for both defenses will be to stop the run first and put the games on the less-than-imposing quarterbacks, A.J. McCarron and Everett Golson, both of whom have had their moments in both directions. McCarron is the more efficient passer of the two, by far (he leads the nation in pass efficiency), and the more experienced, by far, having triumphed on this stage last year against LSU. For Golson, the experience will be entirely new, with a Nick Saban/Kirby Smart game plan thrown in for good measure. If the night unfolds as expected, his margin of error for keeping the defense out of trouble is razor-thin. 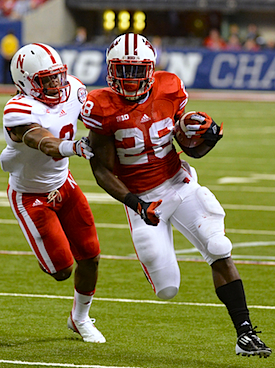 The Cardinal and Badgers will both riding into Pasadena on a wave of "momentum," although there is something qualitatively different about the trajectory of a team that closed its season with four consecutive wins over ranked opponents following a late change at quarterback and one that closed by performing a ritual slaughter on its final opponent after backing into the opportunity. As gruesome as Wisconsin's out-of-nowhere, 70-31 splattering of Nebraska was in Saturday's B1G title game, it's impossible to square those Badgers with the ones that blew a 17-point lead against the same Nebraska team earlier in the year, dropped three of their last four in overtime and only backed into the championship slot because the first and second-place teams in the Leaders Division, Ohio State and Penn State, were both ineligible. In five games against teams that finished with winning records prior to Saturday, Wisconsin averaged 17 points on 289 yards of total offense, and lost four of the five. The Cornhuskers must have felt like their usual sparring partner had been replaced at the last second by Wladimir Klitschko.

And that's how the Badgers became the first team to book their tickets to Pasadena without a national ranking (according to the AP poll) since the 1983 UCLA Bruins, and the first ever to arrive with as many as five losses. #tradition

To extent the massacre in Indy restored the ground game to the status of "irresistible force," Stanford will be as close as any defense the Badgers have seen to an immovable object, despite falling from first nationally to third against the run after an uncharacteristically rough night in the Pac-12 Championship win over UCLA. The Bruins, like Oregon and (to a lesser extent) Arizona earlier in the year, had some success attacking the Cardinal out of the spread, but no one has been able to line up and run it right at Stanford, Badger-style. Based on what we saw this weekend, Wisconsin may be the first attack just burly enough to make it work. Based on the rest of the year, the Cardinal front seven will methodically swallow them up.

The Fiesta is your non-championship winner for the second year in a row, following last year's excellent Oklahoma State-Stanford tilt with a Tortoise-versus-Hare-worthy encore between two teams that, as of two weeks ago, were on a collision course for the championship game. Beyond the obvious contrasts in philosophies, pace and curb appeal, both sides will have to brace for a potential encounter with kryptonite: For Oregon, K-State will be the nearest approximation the Ducks have seen to the disciplined, veteran defense from Stanford that bottled up the Pac-12's best offense in their only loss; meanwhile, Chip Kelly's run-oriented spread is a terrifying reminder of the Baylor attack that shredded the Wildcats for 52 points on 580 yards in their only loss, in Waco. Both of those games unfolded simultaneously, and provided the other side with an effective blueprint that's right in their respective wheelhouses.

One misconception about Kansas State is that its steady refusal to play the hurry-up game is a liability if the defense begins to struggle in a shootout, which was the case against Baylor but has not been true anywhere else. Although the Wildcats don't move as quickly between plays, they get just as much done on a per-play basis, and still average more than 40 points per game. (Considering they lead the nation in punt returns, kick returns and turnover margin – i.e. in favorable field position – they'd have to be fairly wretched to somehow not average 40 points.) The staggering efficiency on display in their 55-14 shellacking of West Virginia is Exhibit A for how much damage K-State can inflict in a very limited number of offensive possessions. If Oregon scores in three plays and Kansas State responds by scoring in thirteen, it still comes down to which defense can break serve.

Alright, let's get the hand-wringing out the way on this one. The BCS selection procedures lay out two scenarios for the champion of a "mid-major" conference to make the cut in a big-money game: 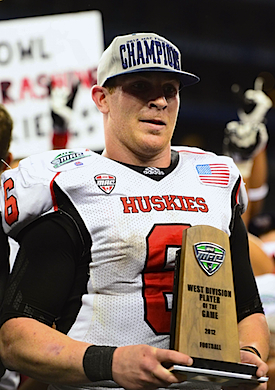 It is but a humble article, but I deliberately stress the AND in that passage because the clause that follows it seems to have been somewhat obscured by the part about finishing in the top sixteen. In fact, Northern Illinois came in at No. 15 on the heels of Friday night's double overtime win in the MAC Championship Game, putting them just behind Oregon State and Clemson and just ahead of Nebraska, UCLA and Michigan. Which is only good enough to guarantee the Huskies a ticket because – and this is important – the champions of the Big East and Big Ten were worse. Based on the relevant polls, they were significantly worse. Louisville (see below) falls outside of the top 25 in four of the six computer polls and lands six spots behind NIU in the standings, at No. 21. The computers, for which it makes no difference if Wisconsin had beaten Nebraska 70-31 or 7-3, collectively prevented the Badgers from entering the final standings at all. The Cardinals and Badgers weren't picked out of a hat – although Wisconsin's presence in the B1G title game commands a hat tip to the NCAA's Committee on Infractions – and neither were the Huskies: They weren't picked at all. They cleared the bar set for them long before the season began. They're here now because the human and computer polls alike judged that bar to be higher than the ones cleared by the champions of the Big East and Big Ten.

Not to suggest that I think a team that not only lost to Iowa in September, but also trailed in the fourth quarter against both Army and Kansas, is anything but the latest lamb to the slaughter against a blue-chip outfit like Florida State. But who cares what I think? NIU is tied with Notre Dame and Ohio State for the nation's longest active winning streak at 12 games. The rules say they're entitled to a shot at No. 13 on the biggest stage Sun Life Stadium can support. As long as the concept of automatic bids exists, there is no fair way to rewrite them in which this opportunity does not.

Oh, and sorry about all of this, Florida State. Finally back in the BCS for the first time since 2005, and stuck through no fault of your own in a no-win situation that offers zero opportunity to improve your stock nationally no matter how well you play – only to hurt it. Why would you ever entertain the idea of bailing on the ACC, again?

The last time Florida was in the Sugar Bowl against the Big East champion was 2009, when Gator QB Tim Tebow very politely lit Cincinnati's defense on fire in his last college game, a prolific, near-perfect night for Florida that still could not erase the bitter disappointment of an SEC Championship flop against that cost them a shot at back-to-back BCS championships. The Bearcats played that game without their head coach, Brian Kelly, who'd bid his undefeated team a premature farewell in December in order to get a head start on the rebuilding project at his new gig, Notre Dame. The Cardinals can only cross their fingers that their man, Charlie Strong – who pulled double duty as Florida's defensive coordinator in that game before taking over at Louisville full-time – doesn't follow the same timeline in pursuit of one of the big SEC openings (Auburn, Arkansas, Tennessee) between now and Jan. 2.

Unlike three years ago, Florida doesn't possess remotely the explosiveness on offense of a Tebow-led attack that spent virtually the entire season on top of the polls. The Gators also have a taller order in dealing with Teddy Bridgewater, whose rousing effort off the bench against Rutgers to get the Cardinals into this game sent his futures stock soaring. But not so much taller that they shouldn't have this one put away by the start of the fourth quarter, at the latest.