At Football Outsiders, we break down the first round of bowl games with advanced stats, analysis, picks and reasons you should actually care 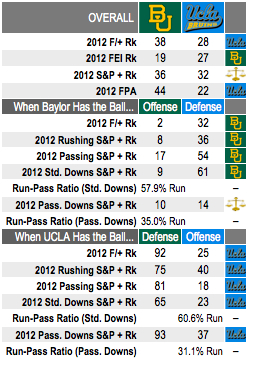 Justify Your Existence: Regardless of the calendar, watching Baylor is the gridiron equivalent of a sugar-coated holiday binge. The Bears openly mock the idea of "moderation": In last year's Alamo Bowl, they sent Robert Griffin III out in a 67-56 track meet against Washington that set bowl records for combined yards (1,397) and touchdowns (18), which turned out to be prelude rather than an epilogue. In the absence of RGIII and his top target, All-American Kendall Wright, the 2012 Bears still led the nation in total offense on the indefatigable arm of senior Nick Florence and a rotating cast of backs and receivers who combined for nearly 7,000 yards from scrimmage. At the same time, they finished next-to-last nationally in total defense, the perfect combination for another outrageous post-Christmas confection. The average Baylor game this season featured 82 points on 1,093 total yards.

Now the part where I remind you all to brush your teeth. Offensive fireworks notwithstanding, the difference in the final score of those games always came down to the much more practical matter of which side took better care of the ball: When the Bears won the turnover margin, they were 7-1; when they finished in the red, they were 0-4. Their unexpected November surge to close the season was first and foremost a result of flipping the turnover margin.

For Future Reference: 2012 belonged to the precocious quarterback class of 2011, which produced the Heisman Trophy winner, the undisputed star of an undefeated team, and five of ten starters in BCS games, including the championship game itself. Long-term, though, the most promising of the lot may be UCLA's Brett Hundley, a versatile, 6'3" prototype who completed 68 percent of his passes and accounted for more than 61 percent of the Bruins' total offense as a redshirt freshman. At this stage, Hundley compares favorably to West Virginia's Geno Smith, who just so happened to ascend to the top of draft boards after reducing Baylor's secondary to a smoldering heap of ashes back in September.

Watch, Scan or Pass? If you only tune in to one game this bowl season prior to New Year's Day, the Holiday Bowl should probably be the one, and that includes games in which your alma mater happens to be participating. Set aside those nagging feelings of guilt and WATCH while devouring an entire gingerbread house.