Around the Scorn: A Petrino in Exile

Lattimore is out, Petrino is back, Tuberville is on the move and Letterman is stuck in the eighties, all in today's roundup

Share All sharing options for: Around the Scorn: A Petrino in Exile

• WE HARDLY KNEW YE, PART ONE. It's still in the air whether Marcus Lattimore will ever play football again, or how effective he can be after his second major knee injury in as many years, but if he does it won't be at South Carolina: At some point this week Lattimore reportedly plans to announce his entry into the 2013 draft, ending his college career as the latest of many sobering entries in the "What If?" Hall of Fame. At his best, Lattimore was the best running back in the country, a svelte, 25-carry-per-game workhorse who was nearly as good as a receiver or blocker on passing downs as he was between the tackles. If Carolina had any inkling that his freshman breakthrough in 2010 (1,609 yards from scrimmage, 19 touchdowns) was the only full season they were going to get from one of the most hyped recruits in school history, they would have relished it all the more. 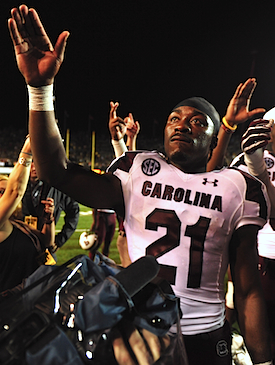 The goal from here, of course, is to rehab the most recent injury with an eye toward becoming the next Willis McGahee, who submitted his equally mangled knee for the draft in 2003, went off the board in the first round and nearly a decade later continues to command a million-dollar salary with the Denver Broncos. Lattimore was a lock for the first round before his leg was turned into a Jenga tower on national television; after, considering the best-case scenario for his return is 2014, and no one has any idea yet what to expect at that point, matching McGahee's position in April seems out of the question. Right now, all he can hope for is that he still has some say in the answer.

• WE HARDLY KNEW YE, PART TWO. Also making the leap on Monday: Ohio State defensive tackle Johnathan Hankins, a no-brainer given his prototypical size (6'3", 325 pounds), accolades (he was voted first-team All-Big Ten by league coaches) and unanimous projections as a likely first-rounder. A colossal defensive tackle who racks up 55 tackles for a team that doesn't lose a game is going to get paid sooner or later; Hankins has opted for sooner, and opposing offenses heartily applaud the decision. 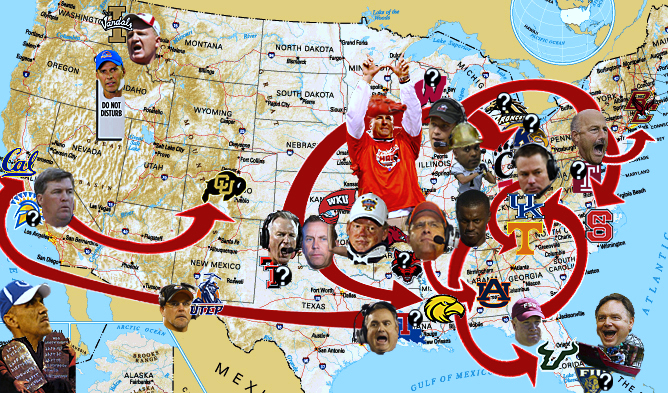 • RETURN OF BLOODY FACE. Just when you thought your daughters were safe, Western Kentucky has added to its menagerie of grotesquely fascinating freaks by naming Bobby Petrino its new head coach, thereby ensuring the most gripping run of blood-and-guts camp this side of American Horror Story. In three decades in the business, Petrino has made pit stops at more than a dozen different schools/franchises, never remaining longer than four years at any of them; eleven of his gigs have lasted two years or less, including his infamously abbreviated administration with the Atlanta Falcons. One way or another, this is going to end badly, because Petrino is a kind of sociopath and people never really change.

In the meantime, it should be pretty fun. In eight years as a head coach at Arkansas and Louisville, Petrino's teams won two conference championships, played in two BCS bowls and finished in the top ten three times – again, at Arkansas and Louisville. The Razorbacks count Petrino's last two years in 2010-11 as the best since they joined the SEC 20 years ago; U-of-L counts Petrino's tenure as the best in school history, by far. The Hiltoppers will win, probably big, at which point Petrino will either be gone to the first big(ger) job that bats its eyes in his general direction, or some new bit of bad behavior once he can afford a comfort zone. I'd bet on the former at WKU, but also the latter again, eventually.

• PINE BOX BUSINESS IS BOOMING. How badly did Petrino's old friend Tommy Tuberville want out of Lubbock, Texas? He's voluntarily defecting to a Big East school, Cincinnati, thereby becoming the first head coach on record to spurn a Big 12 job for one in the Big East. Tuberville is also becoming something of an itinerant circuit-rider: Since famously promising Ole Miss fans he'd have to be carried out of Oxford "in a pine box" in 1998 – two days before flying out on a jet to become the new coach at Auburn – he's changed jobs three times. (Although there is still uncertainty about whether he resigned at Auburn, as the school claims, or he was fired, as his hefty buyout suggest.) Does anyone in Cincinnati think it's going to be his last stop if he has another opportunity to move back south?

The one possible incentive of moving from a "Have" conference in the forthcoming playoff format to a "Have Not" conference is Cincinnati's (apparently high) prospects for being absorbed by the expansion-drunk ACC, or possibly even the Big 12. Or maybe the Bearcats are just down with November collapses and slapping around graduate assistants.

For the record, Barry Switzer has not been the head coach at Oklahoma in Johnny Manziel's lifetime.

(On a side note: Am I the only person slightly bothered by Manziel's marketing to the mass public as a "freshman quarterback" ? This is technically accurate, if you're referring to him as a freshman for a football-literate audience that can be reasonably expected to understand the concept of redshirting. He's a redshirt freshman, a term that exists because of the obvious difference between a traditional, "true" freshman right off the farm and a guy like Manziel who's been on campus and a part of the team for a full year. When it comes to the vastly expanded exposure accompanying the Heisman Trophy, though, that difference is not so obvious: To an audience that doesn't get redshirting, a freshman is just a freshman.

Not that it diminished his achievement in any way, but it seems to me a general, non-sports-obsessed audience would be better served if Manziel was described as a sophomore, which would come closer to the reality than giving the impression he still has unpacking to do. Again, I realize I must be the only person on earth who cares about this.)

EVERYBODY'S GOT SOMETHING TO HIDE EXCEPT FOR ME AND MY MONKEN. After its one-year misadventure with a defensive coach, Ellis Johnson, Southern Miss has found its new boss in a familiar breeding ground: With the pending arrival of Todd Monken from Oklahoma State, three of USM's last four head coaches – Jeff Bower, Larry Fedora and now Monken – have come to the job directly from stints as offensive coordinator in Stillwater, which has proved to be a productive pipeline so far. Between them, Bower and Fedora produced three top-25 finishes, five Conference USA championships and 18 consecutive winning seasons in Hattiesburg before this year's 0-12 collapse under Johnson, who will be happier overseeing the defense at Auburn, anyway, six-figure buyout in hand.

Monken has never been a head coach, and probably hasn't come in for the credit he deserves for the seamless transition at Oklahoma State from his predecessor, Dana Holgorsen, who initially installed the up-tempo, "Air Raid" philosophy Monken was charged with learning and replicating after Holgorsen's departure for the top job at West Virginia. This year, faced with a rash of attrition from the best team in school history in 2011, the Cowboys still finished among the top five nationally in both total and scoring offense, churning out nearly 45 points on 549 yards per game despite a revolving door at quarterback. (Ironically, the only defense that held OSU below 30 points was one of the worst in the league, Kansas.) On paper, the only significant difference between the 2011 outfit that came within a few votes of the BCS title game and the 2012 team that slumped to 7-5 was the former's penchant for thievery: The 2011 Cowboys led the nation in both takeaways (44) and overall turnover margin (+21). Despite slightly improving on that front offensively, from twenty-three giveaways in 2011 to twenty-two, the 2012 Cowboys only took the ball away 17 times and finished –5 for the season.

The complete picture isn't quite as simple as that, but it's close enough to assume that if the defense had held up its end, Monken would have been in line for a far more high-profile promotion. As it is, Southern Miss hopes it has a bridge to Fedora's last team in 2011 – arguably the best in school history – that will allow it to traverse the black hole of the Johnson administration like it's not even there.

• SLEEP WITH ONE EYE OPEN, CLUTCHING YOUR HOG HAT TIGHT. If you think new Arkansas coach Bret Bielema is above fact-checking some random heckler on Twitter about his record at Wisconsin, well sir, you thought wrong:

"@brettgaydos: @bretbielema cant win big ten games but you think you can ompete in the SEC??? Yea right"Check stats, and go back to sleep.

Say what you will about Bielema's abrupt defection to the SEC: The guy was 39-19 in Big Ten games with three consecutive conference championships. QED, bitch.

Oh, and about that abrupt departure: Maybe it wasn't quite as abrupt as everyone thought it was.

• MAGIC MIKE. After being publicly spurned last week by Tennessee-bound Butch Jones, Colorado has settled on San Jose State's Mike MacIntyre to oversee the radioactive crater that is Buffalo football, coming off the worst of seven consecutive losing seasons. The only longer droughts without a winning record in the FBS ranks: North Texas (8 years), UAB (8), New Mexico State (10), Tulane (10), Washington State (10), UNLV (12), Eastern Michigan (17) and Duke (18, pending the result of the Belk Bowl).

What should you know about Mike MacIntyre, other than his readily apparent masochism? a) He's the son of a former D-I head coach, George MacIntyre, who was the last coach to deliver a winning record at Vanderbilt before the Commodores slipped into a 25-year coma between 1982 and 2008; and b) He's coming off a 10-win season at San Jose State, which is San Jose State. If he can win there, he can win…well, almost anywhere. At Colorado, his first year will qualify as a smashing success if he can slash the average margin of defeat to two touchdowns.

QUICKLY…
• Why Johnny Manziel won't win another Heisman.
• Mark Stoops picks Neal Brown to return the "Air Raid" to its Kentucky roots.
• Another week, another rumor linking Nick Saban to the Cleveland Browns.
• The Big East's basketball-only members met to discuss breaking away from the league.
• And something tells me Ole Miss' next recruiting class is going to be awesome.