Bama earns a return trip to the BCS title game by being what we thought it was all along. Only more so.

SEC Championship: Alabama 32, Georgia 28.
- - -
1. This was the biggest game of the season, and very arguably the best, and between the implications and the ham ending, probably the one with the most angles to cover in retrospect. Everything was riding on this showdown, and the fourth quarter was bananas. But let's be very clear up front: Alabama is going back to the BCS Championship Game because it beat Georgia physically on the line of scrimmage. It ran the ball down the Bulldogs' throat.

Bama's first four offensive possessions resulted in three punts and a fumble. Once UGA started to give way in the second quarter, though, it was like pushing a boulder down a hill. Beginning with 5:04 to play before the half, five of the Crimson Tide's final seven drives resulted in points, via four touchdowns and a field goal. On those five drives, they ran 25 plays for 303 yards. Of those 25 plays, 22 were carries by Eddie Lacy and T.J. Yeldon, for 243 yards – a little more than 80 percent of the total, on more than 11 yards per carry. For the game, Lacy and Yeldon combined for 334 and three touchdowns on 7.4 per carry, and Alabama amassed a 15-minute edge in time of possession. On the rare nights that Nick Saban allows himself to dream of offense, this is what he sees: A squad of alpha mashers seizing huge chunks of territory at will, by sheer primal force. They may have been lining up across from nine future draft picks on Georgia's defense, ten, pick your number. Saban's Death Star is going to play for another national title because, offensively, it was the best version yet of what it was built to be.

2. Of course, the sliver or relevant production that didn't come from the retro dominance of the ground game still came as a result of the ground game, on A.J. McCarron's 45-yard, go-ahead heave to Amari Cooper – still just a true freshman, this Amari Cooper, as is Yeldon – for what turned out to be the game-winning touchdown. Cooper was so staggeringly wide open on this play that he actually stops for a second during his route, like even he doesn't quite believe the Tide are actually putting the ball in the air, and a stunned Damian Swann still has no chance of recovering in time to stop the inevitable. Prior to this throw, Alabama had ripped off consecutive scoring drives in the third quarter in which McCarron had not put the ball in the air a single time, and another in the fourth in which they'd moved from deep in their own territory to midfield with McCarron throwing once for one yard.

In fact, aside from this throw, McCarron's only notable contribution was a second-quarter interception that temporarily kept Bama scoreless following a 77-yard march to the UGA 1-yard line. As with his clutch heroics at LSU, McCarron is the quintessential Crimson Tide quarterback: Often uninspiring, occasionally invisible, and destined to produce a moment of triumph that will be enshrined in a Daniel Moore painting for the rest of his life.

Aaron Murray, 0.15 seconds before being sent into orbit by Quinton Dial.

3. By any normal standard, Georgia had a banner day against Alabama's top-ranked defense, and had LSU and Texas A&M not combined to puncture the Tide's aura of invincibility on that side of the ball, it would have qualified as a revelation: The Bulldogs produced a 100-yard rusher, Todd Gurley, which was the SEC equivalent of the Holy Grail before LSU's Jeremy Hill cracked the century mark on Nov. 3, and as a team averaged more yards per play against the Tide (6.3) than any FBS offense in more than two years. That said, Georgia was still went three-and-out six times, was outgained by more than 100 yards of total and was only in the game at the end courtesy of two moments of high opportunism.

The first was the crucial end zone pick off McCarron in the first half – only McCarron's third interception of the year – a miscommunication with Cooper that allowed UGA's Sanders Commings to step in front and thwart the Tide's first serious threat to score. (Which, given the way the game had progressed that point, seemed at the time like it may be the only serious threat.) The second was Cornelius Washington's blocked field goal in the third quarter, which Alec Ogletree took to the house to extend the Bulldogs' lead to 21-10 with much less time remaining for the Crimson Tide to score eleven points than it had taken them to score ten.

Before Ogletree crossed the goal line, I said out loud, "Oh my god, Georgia is going to play for the national championship." For a team less than two months removed from a wipeout loss at South Carolina and the end of five years' worth of futility against elite opponents, the reality of the transformation had not yet processed. Then it turned out that the actual reality is that Alabama is precisely the domineering, blue-chip juggernaut it was always supposed to be.

4. Still, there is no way around the fact that Georgia botched its Cinderella ending. With the clock winding down, one championship within its grasp, a shot at another hanging in the balance and the ball within a few yards of the game-winning touchdown, the Bulldogs just blew it. They should have spiked the ball.

They were already living on borrowed time. Just a few moments before, trailing 32-28 with less than a minute to play and no timeouts, their hopes had been briefly dashed by an apparent interception by Dee Milliner that all but clinched the victory for Alabama. When the pick was overturned on replay, Georgia had new life, and Murray made it count: On three consecutive plays, he connected with Arthur Lynch for 15 yards, Tavarres King for 23, then Lynch again for 26, moving the ball to the Bama 12-yard line with the clock momentarily stopped at 15 seconds. When the ball was spotted for play, the countdown began, and UGA had only one option at its disposal for stopping it, regrouping and getting the play – or plays – it wanted against the best defense in college football with the season on the line. 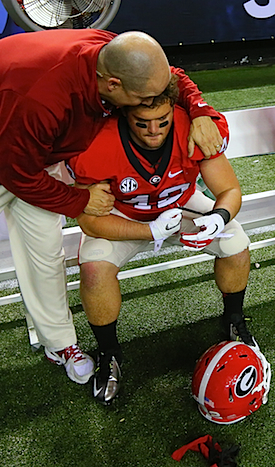 Maybe the idea was that keeping their foot on the pedal was preferable to giving Saban and Kirby Smart time to get the defense they wanted. The decision to run a play rather than stop the clock apparently came from the coaches. (The replay pretty clearly shows Murray pantomiming "spike it?" toward the sideline.) After the game, Murray said he was going for Malcolm Mitchell in the end zone on the final attempt, but the pass was deflected into the flat. The sequence was not quite as mind-numbingly stupid as it seemed in real time. But that doesn't change the basic equation: Spiking the ball with 13 or 14 seconds leaves at least two, probably three composed shots into the end zone. Rushing to the line to get a play off on the fly guaranteed only the school-yard prayer in Mitchell's general direction, and maybe one more shot if that wasn't picked off. A completion in-bounds, short of the goal line was literally the worst possible scenario, and the mad scramble made it infinitely more likely.

5. So then: After a month that featured a season-saving comeback, a season-killing loss, an improbable shot at redemption and a harrowing escape on the final play of the final game, Alabama is right back where it started from: As the overwhelming favorite to repeat as BCS champion. Did you ever really doubt it?

We're still 36 days away from kickoff on Jan. 7, which leaves plenty of time between now and then to say everything that can possibly said about an Alabama–Notre Dame championship, then repeat it, then sprinkle in a few "contrarian" items that don't even seem possible right now just to keep the story moving. As always, the subjective anointing of two teams from the pack is inherently inferior to the prospect of a playoff, though the pending reality of said playoff has taken some of the juice out of the annual tradition of railing against the status quo. So does the fact that all of the potential alternatives to Alabama in the pecking order come with disqualifying asterisks: Ohio State is ineligible, Oregon and Florida failed to win their own divisions, Kansas State was blown out in its next-to-last game by Baylor. Even ignoring its championship pedigree under Saban, Alabama is a conference champion with two wins over top-ten opponents, a narrow loss to another and a colossal margin of victory over the course of the season. The last hurdle was a close call, but the last question is not: If the Crimson Tide finish the job in Miami, there will be no doubt about their place in the food chain.