Like his team, Landry Jones has done everything he could conceivably do short of win a national championship, and his critics never let him off the hook

Oklahoma 24, TCU 17
- - -
1. This was Landry Jones' 49th start at Oklahoma, and I still have no better idea where to place his prolific, up-and-down career than I did before his senior season, or before his junior season. He's passed for far, far more yards than any other active quarterback (and more touchdowns, too), but that's largely a byproduct of the fact he's attempted far more passes than anyone else. He's obliterated all of Sam Bradford's passing records, but never managed anywhere near Bradford's traction at the top of Heisman or draft lists. With today's win, he's led two teams to conference championships, and is probably bound for his second BCS bowl. But he's also been the starter in four losses his team was favored to win by double digits in the last two years alone. When the Sooners were on top to open the 2011 season, they turned in one of the biggest flops of any preseason frontrunner since the distinction has existed.

Jones has done everything he could conceivably do short of win a national championship, and his critics never let him off the hook. In the full flush of the spread era, he's a sign of the times: The first quarterback at a traditional powerhouse for whom all the yards in the world could never be enough. 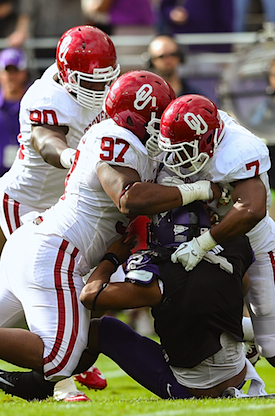 Unlike the last two weeks, his final regular season game was not an outrageous, only-in-the-Big 12 barnburner: Jones put the ball in the air 40 times, for a relatively pedestrian 244 yards, two touchdowns and one very costly interception. No, for once the day belonged to the Oklahoma defense, coming off a harrowing November in which it barely survived back-to-back-to-back shootouts against prolific, up-tempo spread attacks from Baylor, West Virginia and Oklahoma State. Today, TCU's first six possessions resulted in six consecutive punts, and the Frogs' only score of the first half was the direct result of a turnover (Jones' lone interception) that set up the offense at the OU 6-yard line.

For the game, TCU converted just three of 15 third downs and earned nearly half of its 350 yards on just three plays – only one of which, an 80-yard strike from Trevone Boykin to Brandon Carter in the third quarter, actually resulted in points – which qualifies as a significant step forward for a defense that yielded 131 points on nearly 1,700 yards in the last three games alone. All things considered, this was probably the best day for the Sooner D since its obliteration of Texas back in September, which might qualify as more of a compliment if it didn't consist almost entirely of juniors and seniors who played far too much football to take solace in a late season uptick.

3. The wind wreaked havoc on a couple of late field goals on both sides, most notably this cross-continental effort from the foot of OU's Michael Hunnicutt:

On the other end, TCU's Jaden Oberkrom missed an attempt a few minutes that hooked nearly as dramatically, and actually looked good based on multiple (unreliable) television angles. (Oberkrom's incredulous reaction to the call indicated he thought he nailed it, too.) Neither kick is going to go down alongside the "Immaculate Deflection" in the annals of wind-aided chaos, but let's just say that if this one had come down to a game-winning attempt it would not have been entirely in the kicker's hands… er, feet.

4. Oklahoma vowed this week to celebrate the conference championship in full, with rings and banners and the whole bit, regardless of the outcome of tonight's Texas–Kansas State tilt in Manhattan, which is slightly relevant to the question. As far as the BCS is concerned, a Wildcat win would relegate the Sooners to the silver medal podium due to K-State's head-to-head win in Norman back in September, and force OU to sweat out its BCS fate until the final standings are released on Sunday night. At least one Longhorn fan would rather see his team throw the game than contribute to Oklahoma claiming another outright championship. 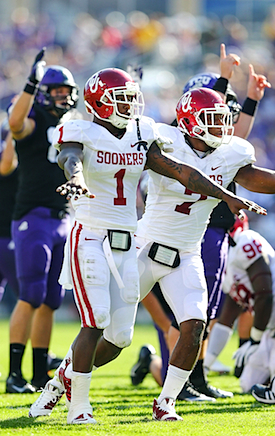 The standing expectations here make this a difficult team to assess. Oklahoma fans may feel differently, but my lukewarm opinion of both Jones and the defense is emblematic of a lukewarm season for a program that always judges itself on a national level, and (as usual) was widely expected to compete for the national championship. By that standard, the 2012 Sooners turned out to be stepping stones to the ambitions of other contenders, serving as the most impressive victims for both Kansas State and Notre Dame, both convincing winners in Memorial Stadium. Those two games marked the first time under Stoops Oklahoma has lost two home games in the same season; through the first 13 years of Stoops' tenure, they'd only lost two home games, period.

The Sooners won a share of a championship, but as minority stakeholders. They won ten games, but none against a team that is likely to be ranked when the new polls are released are Sunday, and the last four of which were all decided by a touchdown or less. Two of those were come-from-behind, skin-of-the-teeth affairs that required Oklahoma touchdowns in the final 30 seconds of regulation. When this outfit makes it to a BCS game – if this outfit makes it to a BCS game – the 'OU' on the side of the helmet will have a lot to do with it, but even according to that bar they've still got a lot to prove.

5. Record-wise, TCU's Big 12 debut is certainly not going to go down as a smashing success: The Horned Frogs' fifth defeat of the season is their most since 2007 and matches the loss column from 2008-11 combined. It also ends the Frogs' hopes of climbing back in the final polls after four consecutive finishes in the top 15. But consider the circumstances: In the first place, TCU began the season as the youngest team in the conference before a ball was ever snapped, having lost at least three likely starters to an offseason drug bust and its most experienced tailback to an unexpected withdrawal from school. By midseason, the Frogs had lost another tailback for the season, lost their starting quarterback to a DUI and were dealing with myriad injuries to starters on both sides of the ball, including their best player, defensive end Stansly Maponga. Altogether, TCU played as many freshmen this season (16) than any other team in the nation. It had to retool the offense to suit the less experienced, more run-oriented Trevone Boykin after the exile of Casey Pachall. In one fashion or another, the Frogs were a team in flux for nearly the entire calendar year of 2012.

Again, expectations after four years of running roughshod over the Mountain West may have been slightly skewed. But grading on a curve, a winning overall record in a new, tougher conference, with road wins over Texas, Baylor and West Virginia, is not a bad foundation to build on. At the very least, if there were any questions about TCU's viability as a Big 12 program, they've been put to bed. This is as vulnerable a team as Gary Patterson has fielded in years, and it still managed to hold its own. It should be the most vulnerable he fields for years to come. When it's back to business as usual, the Frogs are not far from emerging as contenders.