•JOHN JENKINS, DT, Georgia
•JESSE WILLIAMS, DT, Alabama
Man-for-man, the Bulldogs and Crimson Tide are remarkably similar across the board, beginning with their Little Dutch Boy quarterbacks, Aaron Murray and A.J. McCarron, who happen to be entering the game as the two most efficient passers in the nation despite their struggles against upper-echelon defenses. In Georgia's only loss, at South Carolina, Murray completed just 11-of-31 passes with no touchdowns and an interception in a 35-7 rout; two weeks later, he was picked off three times in a sloppy, defensively-driven upset over Florida. Clutch heroics notwithstanding, McCarron was a nonentity at LSU prior to the game-winning drive, and threw two costly interceptions in the subsequent loss to Texas A&M. Both are reliable, veteran captains of potentially explosive attacks when things are going well, and potential liabilities under pressure when they're not.

On both sides, the criteria for "going well" begins on the ground, where UGA and Bama both boast big, versatile, productive tandems at tailback to send charging into the teeth of blue-chip defenses anchored (almost literally) by future first-rounders eating up as much space as possible in the middle of the line. Neither Jenkins nor Williams shows up much on the stat sheet, but the 3-4 scheme favored by both defenses hinges entirely on their ability to hold their ground against constant double teams, thereby occupying at least one additional blocker who'd rather be moving on to the linebackers. The one of them who proves more effective at altering the math on the interior is the one whose teammates will get to tee off in the pass rusher earlier, and more often, at which point efficiency ratings are out the window. 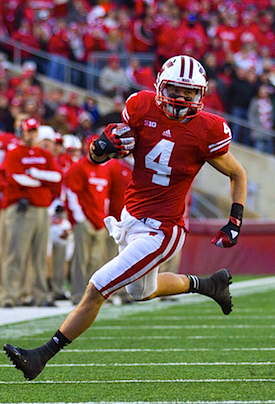 Abbrederis' production has suffered dramatically from the combination of a) The Badgers' instability at quarterback, and b) The reemergence of the ground game over the second half of the season behind prolific workhorse Montee Ball, who remains the focal point of every scouting report, game plan and postmortem. But that was true in September, too, when Nebraska's focus on Ball freed up Abbrederis for arguably his best game of the season: Seven catches, 142 yards and one touchdown that pushed the Badgers' lead to 17 points in the second quarter. From that point on, Wisconsin's offense went into hibernation, Nebraska stormed back for a 30-27 win, and the Badger passing game has been largely irrelevant since.

Of course, getting Ball and James White going between the tackles is always the priority. But it's a different, far more explosive offense when it's able to complement its Cro-Mag tendencies with big plays downfield, and keeping pace with the No. 1 offense in the conference will require it.

•JOHNATHAN GRAY, RB, Texas
Aside from the turnovers, the most glaring failure of Texas' season-defining flop against TCU was the Horned Frogs' complete dominance in the trenches, where the outrushed the Longhorns 217 yards to eighty-six. Prior to that, Gray had begun to justify the five-star recruiting hype with 347 yards on 5.8 per carry over the course of a four-game UT winning streak; against TCU, he managed just 47 on 3.1 per carry. Tonight, the absence of starting quarterback David Ash at Kansas State only lends more urgency to establishing some kind of foothold between the tackles – if not necessarily enough to match Baylor's 342-yard outburst against the Wildcats two weeks ago, then at least enough to keep backup QB Case McCoy out of situations that encourage him to... well, to do anything, really. Based on his performance on Thanksgiving, the less McCoy has on his plate beyond handing off, the better.

•DEVONTE FIELDS, DE, TCU
In fact, the best freshman on the field in Austin by far was Fields, who replaced gimpy junior Stansly Maponga as the Horned Frogs' most feared pass rusher sometime around midseason and currently tops the Big 12 charts in sacks. His target today, Oklahoma quarterback Landry Jones, has dropped back to pass 123 times over the past two weeks, and only been sacked once in dramatic, come-from-behind wins over West Virginia and Oklahoma State. Not coincidentally, Jones has also cracked the 500-yard mark in both games with nine touchdown passes. Jones has had his ups and downs over four years as a starter, but David Ash he is not: If Fields can't force him out of his comfort zone, this particular edition of the TCU secondary isn't the type to pick up the slack.