Like Alabama on defense, at some point writing about how good Oregon is on offense is about as useful as observing that we are a divided nation and the sky is blue. Yet again, the Ducks are the highest-scoring team in the nation, on pace to become the first in Division I history with more than 100 touchdowns in a season. Yet again, they're No. 1 in the Pac-10 in rushing offense, total offense and scoring offense, just as they've been every year since Chip Kelly arrived with his Death Star of an offense in 2007. Kenjon Barner is every bit the prolific burner that LaMichael James was the last two years. Opposing coaches swear Marcus Mariota is better than Darron Thomas, and he's just a freshman. De'Anthony Thomas' existence pretty much speaks for itself.

By the time they roll up 62 points on 730 yards at USC, you've pretty much run out of adjectives. It's just… you know, Oregon being Oregon. Only more so.

But one thing that's always been unique about the Ducks under Kelly, and applies to the 2012 edition, in particular, is just how quickly they can strip a defense to the bone – and how many points they wind up leaving on the field as a result of throttling down with big leads. A few years back, when Oklahoma was doing much the same thing en route to smashing scoring records in 2008, I invented a statistic to measure how quickly the Sooners' up-tempo attack was putting games to bed, which I called "Time of Knockout" – the point at which the lead for Team A exceeds the number of points Team B will score for the entire game. In Oregon's Oct. 6 win over Washington, for example, the Huskies scored 21 points for the game, a number Oregon reached before the end of the first quarter on a 43-yard interception return by Avery Patterson – i.e. the knockout.

That's about par for the course: 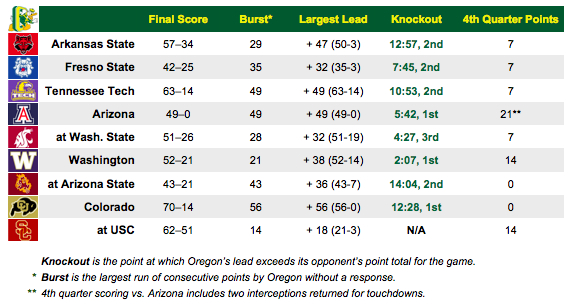 In nine games, USC last Saturday is the only opponent that's been in the ballpark in the fourth quarter, and even their borderline NFL-caliber passing attack couldn't keep the Trojans within single digits. (They managed to cut the final margin to 11 points with a meaningless touchdown on the last snap of the game.) In the other eight, Oregon has led by at least 32 points in all eight, and effectively put away seven of them – all except surprisingly feisty Washington State, which battled into the third quarter – before halftime. And those margins have certainly not come by running up the score late; quite the opposite, in fact. Look at the three games prior to USC: Washington was 35-7 at the half, Arizona State was 43-7 and Colorado (poor Colorado) was 56-0. Ditto the blowouts in September. Chip Kelly is an efficient but merciful conquerer. 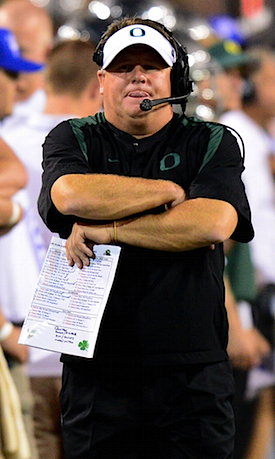 Altogether, the Ducks have scored nearly as many points in the first and second quarters alone (324) as any other other team in the Pac-12 has scored for the entire season. (Arizona State and UCLA have put up 333 apiece; USC has 331.) On the other side, they've also allowed much fewer: Only USC and Washington State have managed more than one touchdown before halftime. Offensively, they're ahead of the pace that landed them in the Rose Bowl last year and the BCS Championship Game in 2010. Et cetera.

Again, though, like Alabama's defense against LSU, at some point the Ducks will have to overcome a challenge offensively, and there is plenty of precedent for it coming this weekend at Cal. Memorial Stadium is the only Pac-12 venue Kelly's offense has yet to burn and pillage: In 2008, Oregon was held below 300 yards and managed just 16 points in a loss; in 2010, the Ducks arrived in Berkeley with a 9-0 record and an unstoppable, unchallenged offense that looked more or less exactly like the current buzzsaw, and limped out with a single offensive touchdown to its credit in a harrowing, 15-13 squeaker decided by an untimely penalty against Cal's kicker. (That turned out to be the only significant challenge on the Ducks' scorched-earth run to the BCS title game.) It's no wonder the Golden Bears are sounding confident this week, as if they had a choice.

If Cal isn't up to that kind of fight again, there's Stanford, which has been ravaged by Kelly's scheme but also owns the nation's No. 1 defense against the run, having just held Cal, Washington State and Colorado to a grand total of negative-36 yards on the ground over the last three weeks. After that, there's the Civil War trip to Oregon State, currently ranked fifth against the run. Presumably there's a challenge in there somewhere, or in the Pac-12 Championship Game, one that stands to do the Ducks some good if their path of destruction ends with another shot in the BCS Championship Game. Because nothing worthwhile can come this easy.