Around the Scorn: Blight on ol' SC

Share All sharing options for: Around the Scorn: Blight on ol' SC

• RIP. Even if you're too young to have ever seen a team coached by Darrell Royal, if you live in Texas you know Darrell Royal, a born-and-bred Okie so instrumental to the emergence of Longhorn football that they named the second-most famous edifice in the state after him. In 20 years as Texas' head coach, Royal racked up two national championships, eleven conference championships, ten top-10 finishes in the polls, a reputation as an innovator and an impressively diverse group of friends in Austin. The bizarre formation he unleashed on college football in 1968, the Wishbone, yielded a 30-game winning streak and became one of the pillars of Southern and Midwestern football at all levels for the next 30 years. 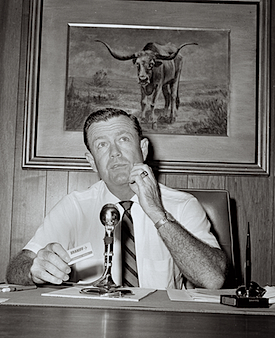 Royal died early this morning at the age of 88, after a lengthy battle with Alzheimer's. The heir to his mantle, Mack Brown, has already confirmed that the Longhorns will wear a "DKR" decal on their helmets and run their first play out of the Wishbone Saturday against Iowa State, which was really, really hoping it had seen its last triple option back when Nebraska fired Frank Solich.

• FAMILY TATTERS. Sports Illustrated's Pete Thamel got a few opposing coaches on the record this week talking shit about Lane Kiffin and his dad, Monte, for the colossal waste of talent at USC, and Lane thinks they got it at least half right:

USC allowed a school-worst 730 yards in Saturday's loss to Oregon, and on Tuesday, Kiffin was asked whether he thought the problem was with USC's defensive scheme or the players' performance.

''I think if we were to single either one of those out, and say it was scheme or execution, I'd think we'd be wrong,"' Kiffin said. ''When you give up those numbers, it has to be everything. You can't give up that amount of points and that amount of yards without it being everything. It really was a combination of every aspect of defense you can think of."
[…]
Monte Kiffin spent 25 years as a defensive coach in the NFL until he joined his son at Tennessee in 2009. Lane Kiffin was asked if his father's NFL experience had made it more difficult for him to adapt to the spread offenses in college. "I think that's a fair observation,'' Lane Kiffin said. 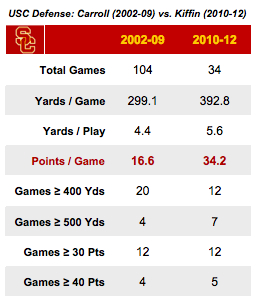 Before this year, I thought it was unfair to compare the Kiffin-era Trojans to the juggernaut outfits that stood astride the Pac-10 for most of the last decade under his old boss, Pete Carroll – especially given the NCAA sanctions inherited by the former – but considering that the younger Kiffin himself put this team in that class, what the hell: In a little under three full seasons on the job, Monte Kiffin's defenses have yielded 500 yards and 40 points more times than Carroll's defenses did in his last eight seasons, and that's included Carroll's disappointing finale in 2009. From 2002-08, USC gave up 500 yards/40 points just twice in 91 games. If Arizona had scored one more point on Oct. 27, the 2012 Trojans would have pulled it off two games in a row.

At age 72, is Monte Kiffin likely on his way out at the end of the season? I think that's a fair observation.

• THEY SEE US BOWLIN'. After months of speculation and intrigue, the SEC and Big 12 have confirmed that the "Champions Bowl" pitting the conferences' respective champions head-to-head will be held in New Orleans beginning in 2014. On a related note, there is no such thing as the "Champions Bowl": In effect, the Big 12 has merely agreed to a new tie-in that will send its champion – or best available team, if the champion qualifies for the four-team playoff – to the Sugar Bowl. ("Champions Bowl" was never anything more than a placeholder name for the concept of matching the Big 12 champ and SEC champ while various sites vied for the honor. There is no new game, nor a pending name change for any existing game.) The question now: How often is the Sugar Bowl actually going to get the Big 12 and SEC champs in the same season? The Big 12 has had at least one team among the top four in the final BCS standings in seven of the last nine seasons, and the SEC thinks any fewer than two SEC teams in the playoff is evidence of a socialist conspiracy.

• TWO 2s A CROWD. Look closely during Pitt's game-extending, season-saving shank Saturday in the second overtime of a triple-OT loss at Notre Dame…

…and you may catch two Irish players on the field, starting cornerback Bennett Jackson and freshman wide receiver Chris Brown, both wearing No. 2. Strictly speaking, you can't do that: Teams may double up jersey numbers, but only one player with a given number may be on the field at a time. (Notre Dame was actually flagged for this earlier in the season, against Purdue.) Saturday, they got away with it, to Brian Kelly's relief, but he'd be just as soon never have to deal with this question again:

"You know, I think it's something that's changed over the last few years in recruiting where kids have this identification with a particular number. I think it's still manageable. We just have to do a better job coaching. It's unacceptable that two guys have the same number in the game, and we've got to be able to manage that.

"Yeah, I would like [the] NCAA to come in and say only one guy can have this number. That would make my life a whole lot easier, believe me. So if you guys [reporters] could all get together and have a writing campaign, that would help me a lot, seeing as you're the root of the whole problem, right?

You're right, coach, The Media is entirely responsible for making your team almost lose its undefeated season in the dumbest possible fashion and promise not to let whatever we did happen ever again.

• NOTHING TO SEE HERE. On the same day it ran an injury story under the headline "Maryland football: where ACLs go to die," the Baltimore Sun laid the sinewy wreckage of the Terps' exploded knees at the feet of their coach, Randy Edsall, and demanded an accounting. By which I mean someone asked a polite question about the three torn ACLs the team has suffered in the last three weeks – two of them sidelining quarterbacks, the third taking out the leading tackler – and Edsall responded by denying the premises:

Maryland coach Randy Edsall said Tuesday that — despite appearances — the Terps have not sustained substantially more ACL injuries than in a normal year. According to Maryland’s training staff, the team suffered three ACL tears last season, four in 2010, two in 2009 and five each in 2007 and 2008. That’s an average of 3.8 in the five years preceding this one.

An expert said there is no "smoking gun" to uncover the causes of ACL tears.

"You can't blame the equipment or conditioning programs — that's bad luck and some of that is the nature of the beast," said Lt. Col. Steven Svoboda, an orthopedic surgeon who is the head team physician at West Point. "It's probably not too far off the mark to say that most ACL tears, even in a collision sport, are going to be a non-contact injury. It's definitely a mix."

Altogether, Maryland has lost four players to ACL injuries since the start of preseason practices, beginning with quarterback C.J. Brown in August, and more recently consuming quarterback Perry Hills, quarterback Caleb Rowe and linebacker Demetrius Hartsfield in consecutive weeks. Another quarterback, Devin Burns, suffered a season-ending foot injury in the same span, which is how the Terps wound up starting a true freshman linebacker under center in Saturday's loss to Georgia Tech, backed up by a freshman walk-on who's listed as a tight end. "I think that's the problem. It has happened at quarterback," Edsall said, calmly keeping reporters distracted as a team of graduate assistants searched their cars for anything that could be construed as a voodoo doll. "I don't think it's going to affect the program negatively in any way [in the future]."

QUICKLY…
• In other ACL news, Wisconsin is planning to start senior quarterback Curt Phillips Saturday at Indiana, his first start in a career that's included three knee surgeries.
• Mark Richt will undergo an offseason hip replacement because he once attempted to "show off" for his wife on a swing set.
• Oklahoma and Nebraska may be reviving their rivalry in the near future.
• Gary Pinkel says his quarterback has "been through hell" this season.
• Jim Mora has a fairly low threshold for sending people to jail.
• Just a few weeks after Munchie Legaux effectively declared himself the best quarterback in the Big East, he's on the verge of losing his job at Cinncinnati.
• Steve Spurrier is not exactly on top of our nation's election laws.
• Joker Phillips on why he's hanging around to coach the next two games at Kentucky.
• Boise State loses a starting defensive tackle to injury, and dismisses a kicker.
• A computer simulation program confirms that, no, Alabama could not beat the Jacksonville Jaguars. Most of the time.
• West Virginia's missing mojo, by the numbers.
• And sorry, prospective pothead athletes, but those pro-marijuana movements in Pac-12 states aren't going to get you off the hook with the NCAA.