Top 25: To Bama belongs the spoils

Why the Crimson Tide get the benefit of the doubt, and the rest of this week's BlogPoll ballot.

Share All sharing options for: Top 25: To Bama belongs the spoils

Since I've spent the last month in this space glossing over Alabama's weekly dominance in favor of lamenting the absence of a marquee win on the Crimson Tide's resumé to rival Kansas State's September upset at Oklahoma, or Florida's defensively driven takedown of LSU, it's only fitting that I fell hook, line and sinker for Bama in its least dominant win of the year. Maybe I'm just a sucker for drama. But the fact that the Tide were outgained by 100 yards, finished minus-2 in turnover margin, converted a single third down, lost the time-of-possession battle by more than 18 minutes and still won, on the road, against the only lineup in the country that can match them blue-chip for blue-chip, tells us more about this team than two months of unwatchable blowouts over mediocrities combined. "Overcame legitimate adversity" is not a bad line to have on the resumé, either, and it doesn't get much more legitimate than trailing at LSU in the final two minutes.

In fact, the only real difference at this point between Alabama and K-State at the top and Oregon right behind them at No. 3 is that Oregon hasn't had that opportunity. USC was supposed to be the Big One for the Ducks, right up until the Trojans were eviscerated for 588 yards at Arizona. In light of that debacle, the 62-point, 730-yard bomb Oregon dropped in the L.A. Coliseum was less a confirmation of its multifaceted brilliance against elite talent (no shit) than a confirmation that USC is kind of terrible – a leap of logic that suddenly made the 51 points the Ducks allowed to a borderline NFL passing attack at least as significant an omen as the 62 they scored.

I'm not sure there's anything more to that than the inevitable, subconscious tendency to give the old money the benefit of the doubt over the new, especially when the nouveau riche represents such a wildly different model for success. A narrow, come-from-behind win for Alabama, even a half of complete failure on offense, is the old lion showing some its tried-and-true resilience; a shootout in which Oregon never quite extends its lead comfortably enough to pull its starters is the upstart showing some cracks.

This is the same dynamic that lifted Alabama into the championship game last year over Oklahoma State – I'm still convinced that if the question had been Alabama vs. Oklahoma under the same circumstances, it would have been no question at all – and Oregon is not going to shake it until it shows the skeptics the bloody head of an Alabama or LSU on a pike.

• Georgia moves up a couple spots, leaping LSU and Ohio State on the strength of its win over Ole Miss and LSU's loss, but despite the head-to-head result in Jacksonville a couple weeks back I'm still not quite ready to move the Bulldogs ahead of Florida: The Gators' wins over LSU, South Carolina and Texas A&M are worth too much to fall behind a team whose second and third-best wins are over Ole Miss and Vanderbilt. (The fact that UGA's path to the SEC Championship Game doesn't have to go through Alabama, LSU or A&M is an ongoing sticking point.) This isn't going to change until/unless a) Florida loses to Florida State, or b) Georgia upsets the SEC West champ (presumably Alabama) in Atlanta.

• I'm still cool on Louisville and Clemson, both of which have climbed into the top ten in the mainstream polls despite thoroughly uninspiring schedules. (Clemson's blowout win Saturday over Duke was only its second over a team currently sporting a winning record; the first was over Ball State.) At least the Tigers will get another test of their mettle before they're ushered into BCS game, against South Carolina. Louisville's tallest remaining hurdle to a perfect record is Louisville.

• Yes, that is five consecutive Big 12 teams occupying slots 19 through 23, one of which – Oklahoma State – is actually up from last week after losing by double digits at Kansas State. If you've been keeping track of these teams on a weekly basis, then you should understand completely. 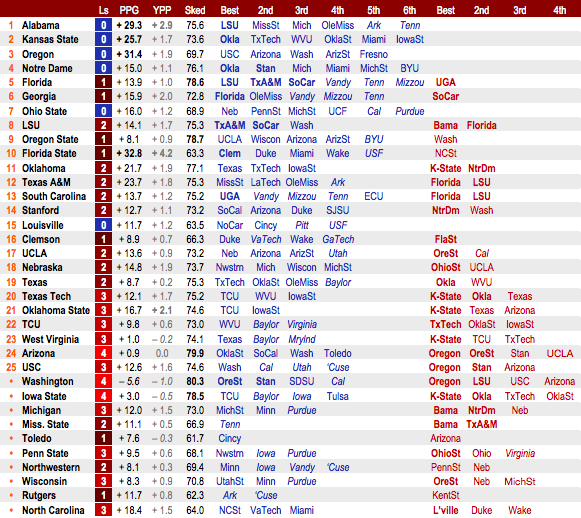