Around the Scorn: In which Kentucky warms up the winter guillotine

Share All sharing options for: Around the Scorn: In which Kentucky warms up the winter guillotine

• BURYING THE LEAD. Clocks changed over the weekend, thus signaling the beginning of the ritual winter purge of failed head coaches. First on the block: Kentucky boss Joker Phillips, whose pending demise was confirmed Sunday by athletic director Mitch Barnhart in the ninth paragraph of a ten-paragraph open letter to "Big Blue Nation," or what's left of it. 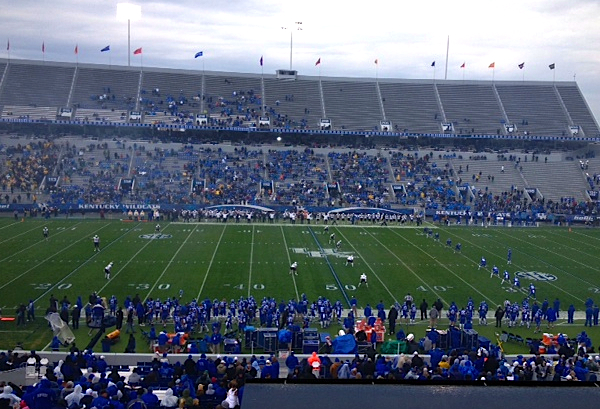 Saturday's 40-0 shaming at the hands of Vanderbilt was Kentucky's eighth consecutive loss, the sixth in that span by double digits, and left the Wildcats ranked dead last nationally in total offense. (For some perspective on how bad the last two months have been, the flop against Vandy represented neither the first shutout of the season for Kentucky nor the most lopsided final score against a team currently boasting a losing record.) Phillips will remain on for the final three weeks of the season, including an open date this weekend, which sounds like the most depressing possible way to spend a Saturday until you realize the last two games are against Samford and Tennessee.

The kids may be too young to remember this, but the program Phillips inherited in 2010 was not an automatic loser: The last four seasons under his predecessor, Rich Brooks, were arguably the best in Lexington since a young Bear Bryant stalked the halls some six decades before, yielding four consecutive winning seasons, four consecutive bowl games and even a brief, bizarre flirtation with the top ten after an upset over No. 1 LSU in 2007. Phillips managed to get the Wildcats into a bowl game in his first season, but did not produce a winning record and (assuming a loss in Knoxville) will go out with a 4-20 mark in SEC games. He also lost ground in-state to his counterpart at Louisville, Charlie Strong, who was hired at the same time and immediately set a program that had fallen behind Kentucky under Steve Kragthorpe on an upward trajectory that's now on the verge of yielding an undefeated season, a BCS bid and possibly a plum SEC job for Strong – Arkansas? Auburn? Tennessee? – if he wants it. Meanwhile, in his third year, Phillips' team began its descent into the abyss by getting upset by another in-state "rival," Western Kentucky.

Of course, Kentucky football is no plum. But it has plenty of reasons to expect better.

• . I'm not entirely certain how Auburn fans feel about the fact that the undisputed high point of their season is a fumble return against New Mexico State, but at this point, they'll take what they can get.

If you don't think there's someone attempting to Photoshop No. 25 for New Mexico State into an Alabama uniform as we speak, you haven't spent enough time on the Internet.

• HAPPY TRAILS, PART ONE. South Florida snapped a six-game losing streak Saturday with a 13-6 win over UConn, the Bulls' first Big East victory of the season, but paid for it with their starting quarterback: As feared, senior B.J. Daniels is out for the year with a broken ankle, thereby ending the career of college football's most feast-or-famine quarterback. (An ironic ending, too, considering Daniels broke so many metaphorical ankles over the last four years as a scrambler.) He goes out with 10,500 yards of total offense, third-best in Big East history, as well as 39 career interceptions, fifth-most among active passers nationally. For your consistently entertaining inconsistency, B.J., we salute you.

• HAPPY TRAILS, PART TWO. In other injury news: Senior wide receiver Marlon Brown is finished at Georgia after suffering a season-ending knee injury in Saturday's 37-10 win over Ole Miss, relegating him to the bench alongside fellow starter Michael Bennett for the Bulldogs' closing push toward the SEC title game. Once upon a time, Brown was ranked as the top prospect in the state of Tennessee out of high school, but never really caught on as a regular, reliable member of the rotation until this year: He ends his UGA career with 55 receptions and eight touchdowns, exactly half of those totals coming in the first nine games of 2012.

• UNHAPPY TRAILS. As usual, Washington State coach Mike Leach had nothing but scorn for his team's effort Saturday in a 49-6 debacle at Utah, the Cougars' sixth consecutive loss in Pac-12 play. And as usual, much of that scorn fell on the school's all-time receiving leader, Marquess Wilson, who reportedly responded by walking off the field Sunday night during a workout and has been formally suspended from the team. (Other reports suggest Wilson has quit altogether, though the team hasn't confirmed.) That should come as no surprise to Cougar fans: Almost from the moment Leach arrived, Wilson has been in his doghouse for a lack of effort and general "softness," to use Leach's term, and the relationship has only deteriorated as the losses have mounted.

Although he leads the team in receptions (52), yards (813) and touchdowns (5), Wilson has embodied the disappointment of Leach's offense in general: Those numbers are well off the prolific sophomore pace that made him a preseason All-American, and the Cougars limp into the home stretch averaging a paltry 19 points per game – good for 112th nationally, and a full 10 points below their mediocre average (29.8) in 2011.

QUICKLY…
• Today is the one-year anniversary of the attorney general's report that broke the Jerry Sandusky scandal into the mainstream.
• Rutgers is doing the Stars 'n Stripes thing to its helmets for this weekend's visit from Army.
• Oh hey, wow, another key injury at Maryland.
• Bill Snyder has about as much to say about Collin Klein's status for Kansas State's trip to TCU as you'd expect.
• Floppers gonna flop.
• A mind-bending GIF captures the essence of Les Miles.
• And nothing sums up LSU's night against Alabama quite as succinctly as the fact that one member of the Hebert clan was booted from the press box for failing to contain his enthusiasm, while another took to Twitter to rake Miles over the coals.