BCS Realpolitik: Oregon aced its biggest test of the year, and all it got was more uncertainty in the standings

Share All sharing options for: BCS Realpolitik: Oregon aced its biggest test of the year, and all it got was more uncertainty in the standings 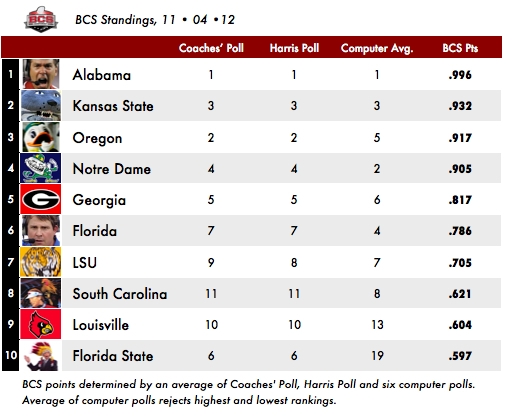 Kansas State and Oregon both spent Saturday night walloping a ranked conference opponent, which brings us to the latest thrilling installment of the new weekly smash, "WILDCATS OR DUCKS?" If both keep winning, November is going to be better than sweeps, and that's without even soliciting bets.

At this point, you'd have a better shot at calling Tuesday's election than the BCS computers. Although the algorithms have finally come around this week on Alabama as No. 1 – the Crimson Tide take the top spot in four of the six computer polls on the heels of their dramatic, comeback win at LSU, up from just one last week – they remain skeptical of Oregon, relegating the Ducks to fifth on average for the second week in a row. In fact, their nationally televised incineration of USC didn't move the needle at all, even by a fraction: Oregon went up a spot in one of the computer polls, down a spot in another and held fast in the rest, finishing with the exact same computer score (.850) that it turned in last week. So much for the Trojans beefing up the strength of schedule. 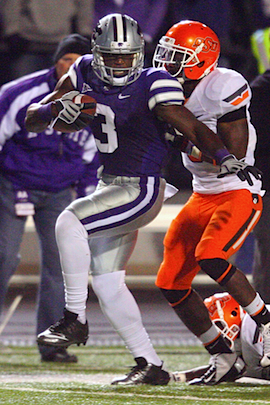 Still, while Oregon seems to be treading water, the distance between the Ducks and Kansas State is beginning to shrink: Despite dispatching Oklahoma State without much trouble, the Wildcats still lost ground in the computers to surging Alabama, slashing their overall margin over Oregon from a whopping .0247 points in last week's standings to .0152 points this week – a difference of about 38 percent, which ain't nothing. The Ducks have four games to make up the rest, beginning this weekend at Cal; after that, they bite off back-to-back dates with Stanford and Oregon State, both currently ranked in the top 15 in all major polls (human and computer alike) and if everything goes as expected, the Pac-12 Championship Game against (probably) the winner of the USC-UCLA game. Considering Oregon State has picked up some of the slack from the Trojans' descent into mediocrity, that's as solid a closing stretch as the computers or anyone else has any right to ask for.

Not that Kansas State is taking the rest of the season off, but the Wildcats' slate in the same span – at TCU, at Baylor, back home against Texas – doesn't have quite the same juice, at least in part because K-State doesn't have a conference championship game anymore to pad the strength of schedule. (Although, as Bill Snyder knows well, the extra game can also come back to bite you in the ass.) For now, the consensus still seems to be that Oregon is in the driver's seat barring something wildly unforeseen like Oregon State tanking the SoS numbers by losing to Nicholls State or something. But the complete lack of movement after Saturday's romp in L.A. has thrown that assumption into some doubt.

• REALPOLITIK TOP TEN. Taking into account all possible scenarios at the end of the season, here's the most likely pecking order for tickets to the BCS Championship Game, with a dividing line separating fantasy from reality: 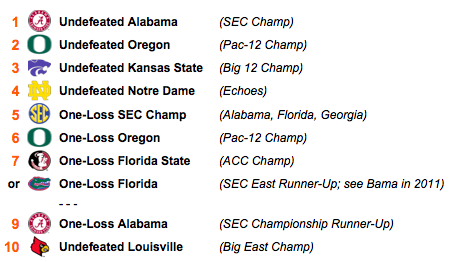 One question we no longer seem to be asking: Can Notre Dame leap Kansas State if the second ticket to the championship game comes down to the Irish and Wildcats? Last week, after watching ND's impressive, validating win at Oklahoma, I said the question was "too close to call," but suspected the sheer nostalgic/demographic power of the NOTRE DAME brand would be enough to leave K-State in the cold if it came down to it. Clearly, that is not going to be the case: Even after putting a little distance between itself and Kansas State in the computer polls, Notre Dame fell a little further behind the Wildcats in the overall standings, and was actually leapt by Oregon based on the human polls' preference for the Ducks. 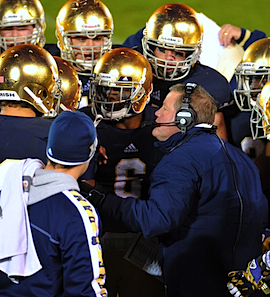 At this point, that preference is not going to change if both teams run the table, and the benefit of the doubt is clearly beginning to shift to Kansas State. In other words, the Irish are going to need a little help

• NO REPEATS. One circumstance we almost certainly do not have to worry about: An all-SEC rematch in the BCS title game. With LSU's second loss, the only one-loss contenders remaining are Georgia and Florida in the East, one of which must face Alabama in the SEC title for what amounts to a) An elimination for the Crimson Tide, or b) A de facto semi-final for the BCS title game if the requisite two-thirds of the K-State/Oregon/Notre Dame triptych goes down. Barring a miracle Saturday in Auburn, that's going to be Georgia. Either way, the loser in Atlanta can count itself out of any national championship talk.

The only remotely plausible scenario under which Florida's chances could be revived without playing in the SEC Championship Game – Georgia losing to Auburn does not fall under "remotely plausible" – involves losses by Oregon, Kansas State and Notre Dame, which would leave the Gators, fresh from a win over Florida State in their last game, as the last contender standing. (Not coincidentally, this is the only scenario that will get the Seminoles into the title game, too, if they beat Florida.) If that sounds farfetched, it is. But it's not unprecedented: In fact, it's exactly the scenario that cleared the path for Alabama to rise to No. 2 last year after its loss to LSU in early November, thanks to subsequent losses by Oklahoma, Oklahoma State and Oregon in a span of 24 hours. If we see a rerun of that earth-shaking weekend in the next three weeks, suddenly the winner of the Florida-Florida State game is sitting pretty.

• FOR CHAOS' SAKE.As long as there are four undefeated teams at the top of the heap, the prospects for chaos are strong: Under any circumstances, the exclusion of an undefeated champion from the Big 12 or Pac-12, or Notre Dame, would rank easily alongside 2000, 2001, 2003, 2004, 2008 and 2011 as the biggest shitstorms the BCS has ever created. (And that's still without even taking into account the fate of poor, neglected Louisville lurking around the fringes of the top ten on behalf of the Big East.) But it would make for an ideal little playoff format, wouldn't it?