Alabama wins the game of the year and clears its tallest hurdle to another BCS Championship Game, in uncharacteristically dramatic, emotional fashion.

Share All sharing options for: Alabama 21, LSU 17: Once more, with feeling

Alabama 21, LSU 17.
- - -
1. There are too few of them, and in the relentless pace of the season too many of them flit past too quickly to notice. But occasionally college football still produces small, individual moments of clarity, like an overwhelmed A.J. McCarron bawling his eyes out in victory, that instantly define the sport and remind you that they cannot be replicated in quite the same way anywhere else. If Alabama goes on to repeat as the national champion, McCarron's reaction to saving his team's season deserves to stand as one of the enduring images of 2012, if not at the front of the album.

2. When LSU went ahead early in the fourth quarter, 17-14, it was the first time at any point in McCarron's career that he'd taken a snap with his team trailing in the second half. When he led the offense back onto the field with 1:34 to play, still trailing 17-14, Alabama's last five offensive possessions had ended punt, punt, fumble, punt, punt, and yielded a single first down. For his part, McCarron had completed one pass in the second half, for zero yards. On the road, at the climax of the season, in the all-or-nothing litmus test that would determine this team's place in the postseason order and in the lineage of crimson-clad champions that preceded it – facing legitimate adversity for the first time – he had come up literally empty. 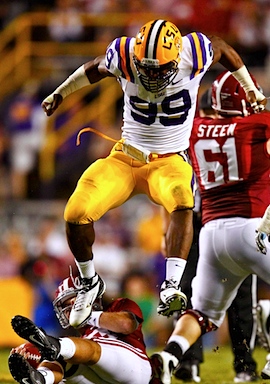 To go from that reality, the one in which everything that you and your teammates have worked for, and the population of an entire state has so much emotionally and financially invested, is slipping over the edge of a cliff, to the one in which you are the hero has pulled it all back onto solid ground, in a span of one drive… well, it is a bit much. On that drive, McCarron completed four of five passes for 72 yards, capped by his first and only touchdown pass of the night, and became the quarterback he'd grown up in Mobile, Ala., dreaming of becoming. For once, he wasn't killing the clock in a blowout. He wasn't overshadowed by the ground game, or bailed out by the defense. He wasn't watching nervously as his fate was turned over to a kicker. He didn't leave praying for enough other teams to lose over the next few weeks to give him a second chance.

At the end of a long, mostly dismal night, he seized the last opportunity and buried the rest beneath the layers of the next Daniel Moore Painting. Then the magnitude of that began to hit him, all at once.

3. The ironic part: Of the two quarterbacks, McCarron's night as a whole was arguably his worst of the season, while Zach Mettenberger turned in without question his best. For two months, Mettenberger had looked lost, an inexperienced liability to be protected even more diligently than the veteran seniors who had been devoured whole by Alabama's defense in 2011. In his first four SEC games, Mettenberger had completed fewer than half of his passes (46.2 percent) with one touchdown to two interceptions; he last time we saw him before Saturday night, against Texas A&M, he was an abysmal 11-of-29 passing, for an even more abysmal 3.3 yards per attempt, against an A&M secondary that had been routinely shredded through the air. 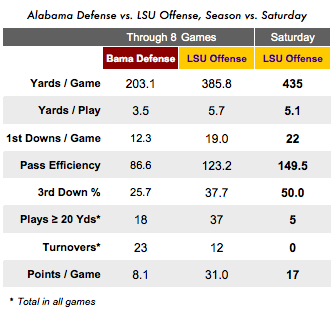 And yet: Prior to McCarron's last-minute heroics, the story of the night was how thoroughly outplayed he'd been by one of the most erratic passers in the league. We knew Mettenberger had an arm, but where in the world has he been hiding the confidence and accuracy he flashed against the Crimson Tide? And why did it take the best defense in the nation to bring it out?

Mettenberger's final line (24-of-35, 298 yards, 1 TD, 0 INTs) was good by just about any standard, and phenomenal by the standards of quarterbacks facing a Nick Saban defense over the last five years: His pass efficiency rating (147.9) was the best any quarterback has delivered against Alabama since Cam Newton broke Bama's heart back in 2010, and more than 40 points better than any of the first eight quarterbacks who had been his shoes against the Tide this year. As a team, LSU generated more rushing yards (139), passing yards (296), total yards (435), yards per play (5.1), first downs (22) and points against Alabama than any FBS offense in the last two years.

4. The fact that the Tigers exceeded many of their own season averages in the process is remarkable, and a testament to Les Miles' coaching staff, which got their headsets shoved down their throats by Alabama's staff in January's BCS Championship Game. The offensive game plan, relying overwhelmingly (and surprisingly) on Mettenberger's arm and true freshman Jeremy Hill's legs, was a little miracle, and accomplished exactly what it wanted: Hill went over 100 yards rushing, Mettenberger finished just shy of 300 passing and the Tigers ran 85 offensive plays to Alabama's 52 – good for an advantage of nearly 19 minutes in time of possession. No offense has imposed its will on Alabama to that extent in a long, long time. The script could not have unfolded more perfectly. 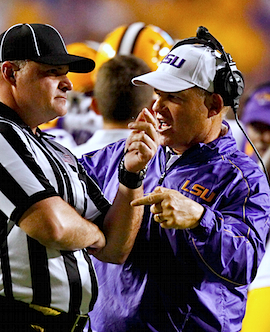 The giant asterisk, of course, is the points LSU left on the field on its first two possessions of the fourth quarter, when back-to-back drives ended in a) A turnover on downs at the Alabama 37-yard line, on a failed run up the middle on 4th-and-1, and b) A missed field goal from 37 yards out, negating an 11-play, 54-yard march that milked nearly six minutes off the clock. Miles has already taken some heat for those calls – and for a failed fake field goal attempt in the first half – because the coach at LSU takes some heat every time he loses. Personally, I don't see how a different call in any of those situations necessarily changes the outcome. (If there is a legitimate criticism, it should probably be directed at the suddenly soft coverage in the Tiger secondary on Alabama's game-winning drive, after successfully shutting the Tide down with much tighter coverage over the previous two quarters. Perhaps the sudden tentativeness in the clutch was the first documented case this year of the secondary missing last year's All-Americans at cornerback, Morris Claiborne and Tyrann Mathieu.) But when critics are searching for ways to nitpick your effort in a game like this, against a force as previously unstoppable as Alabama, you can rest assured you have a damn strong football team.

5. Damn strong, yes, but with two losses, likely also bound now for one of the Florida bowls on New Year's Day – or the Cotton Bowl – instead of a BCS game, barring something unexpected down the stretch. Certainly no one who voted LSU No. 1 before the season expected two losses, and in some circumstances that would qualify as a disappointment. Under the actual circumstances, though, if Alabama and Florida hold up their ends of the deal, I think the final ledger will count the Tigers as exactly the elite frontrunners they were supposed to be, minus a few of the necessary breaks.

Alabama, obviously, is full steam ahead for the BCS Championship Game, which is now only a matter of avoiding upset bids from Texas A&M next weekend and (presumably) Georgia in the SEC title game. (The less said about this particular edition of the Iron Bowl, the better.) Like last year, the anomalous close call at LSU appears to be more a case of LSU bringing that wood than any inherent vulnerability in the Crimson Tide. A&M and Georgia are no gimmes, especially if Johnny Manziel and/or Aaron Murray show up in their version of Mettenberger mode. But we are now clearly at that point where it's safe to say the only real obstacle in Alabama's path to Miami is Alabama.