The post-Luck Cardinal go one better than their predecessors by punching their ticket to the Rose Bowl, and reaffirming their staying power all over again

Share All sharing options for: Stanford 27 UCLA 24: The Shaw must go on

Pac-12 Championship: Stanford 27, UCLA 24
- - -
1. This was the first back-to-back rematch in college football in something like eighty years, and for the most part it looked nothing whatsoever like last week's 35-17 romp in Stanford's favor in the Rose Bowl. In that game, the Cardinal shoved UCLA around on the line of scrimmage, outrushed the Bruins by nearly 200 yards, sacked Brett Hundley seven times, and racked up a nine-minute advantage in time of possession that was actually much larger prior to the final, meaningless minutes of the fourth quarter. That's been Stanford's M.O. for the past five seasons, pretty much from the moment Jim Harbaugh agreed to take over the most hapless, physically outmanned outfit in the conference in 2006, and UCLA wasted no time tonight turning it on its head. The Bruins had more yards rushing on their first two offensive possessions (132) than the nation's No. 1 run defense allowed in the entirety of nine of its twelve games in the regular season, or any of its six game at home.

This time, it was UCLA that controlled the line of scrimmage, UCLA that dominated the box score and UCLA that produced the individual star of the game, Johnathan Franklin, who went for more yards on the ground (201) on just 18 carries than any team had managed against Stanford. Hundley had 82 more. Altogether, the Bruins outgained the Cardinal by 140 yards and put up a yards-per-carry average (7.8) that more than doubled anyone else's yield against the Cardinal except Oregon. And even the Ducks didn't come close to seven-point-eight. 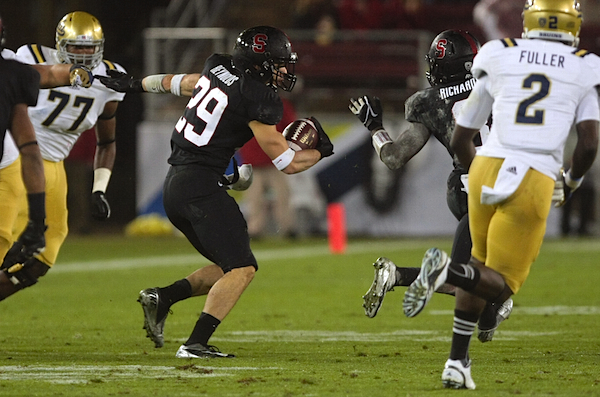 2. Once everything else is accounted for, the equalizer for Stanford – the trump card to UCLA's apparent domination on paper – was Ed Reynolds' winding, 80-yard interception return to the L.A. goal line in the second quarter. It was the game's only turnover, and the line of demarcation between the Bruins' initial surge and Stanford's methodical wresting of control over the next two-and-a-half quarters. At that point, UCLA led 14-7 and was well on its way to extending that edge courtesy of another pair of big plays (a 31-yard gain by Franklin and a 17-yard strike from Hundley to Joseph Fauria) immediately preceding the pick. Stanford tied the game on the next play, a one-yard plunge by Stepfan Taylor, and proceeded to clamp down: Five of UCLA's final eight possessions from that point ended in punts, a sixth ended in a missed field goal from 52 yards out, and the Bruins only managed one more play (a 32-yard run by Franklin) that covered more than 20 yards. Reynolds has actually taken three interceptions back for touchdowns this year, but one more yard could not have made tonight's effort any bigger. 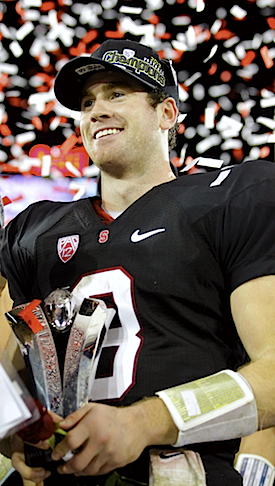 Although this team has been carried by the defense right from the beginning – and by the first-rate front seven, in particular – the turning point in Stanford's season was the decision in late October to turn the reins over to Kevin Hogan as the starting quarterback for the home stretch. Which was not exactly a no-brainer at the time: Josh Nunes wasn't setting the world on fire, but he wasn't a disaster, either, and the Cardinal were 6-2 with wins over USC, Arizona and Cal and a conference championship within reach. Typically, that's not the time coaches choose to shake things up by sitting a fourth-year junior for a redshirt freshman.

That was then. Now, it should be obvious to anyone who watched the same team that failed to reach the end zone in close, low-scoring losses at Washington and Notre Dame with Nunes at the wheel rip off four consecutive wins over ranked opponents with Hogan that the November run that's sent the Cardinal back to the BCS would have been impossible without the change. Hogan's not smashing any records, and he's still at least a season away from drawing tentative comparisons to Andrew Luck if things continue to go well. But he is an accurate, efficient passer (16-of-22 tonight for 153 yards, 1 TD and no turnovers) and a slippery, productive runner despite lacking any discernible speed or agility; barely a month after setting foot on the field for the first time, the kid is certifiably savvy. With this defense, if he'd been in lineup in Seattle or South Bend, Stanford would probably be on its way to Miami for the BCS title game.

4. So anyway, Stanford is going to the freaking Rose Bowl, with no one named "Harbaugh" or "Luck" involved in any way whatsoever, yet both loom in the background of this win like the Cardinal's answer to George Washington and Lafayette. Only six other programs have played in BCS bowls in three consecutive seasons – Florida State, Miami, Ohio State, Oklahoma, Oregon and USC – and just five years ago the notion that the resident whipping boy of the Pac-10 had any chance of joining that club in the foreseeable future would have gotten you laughed off the Internet. Prior to Luck's sophomore breakthrough in 2010, Stanford had played in exactly one major bowl game in the previous 35 years: The 2000 Rose Bowl, under Tyrone Willingham, and even that team finished unranked with four losses in a dismal year for the conference.

Even before this season, even among the optimists, no one was quite prepared to buy the post-Luck Cardinal at the same level as the teams that had made good in runs to the Orange and Fiesta bowls in 2010 and 2011. In the AP poll, they started out at No. 21, a distant third in the Pac-12 pecking order to headliners USC and Oregon, and didn't crack the top ten in any of the preseason magazines. Besides Luck, the Cardinal lost three other offensive mainstays who went in top 50 picks of the draft and half the starting defense. However solid the foundation bequeathed to Shaw, surely it hadn't developed to the point of sustaining BCS runs in the face of that kind of attrition, barely five years removed from rock bottom. Now that it has, there is no denying Shaw's program its place among a very small handful at the top of the food chain.

5. Had the ending gone a little differently, I might be singing the same hosannas to the quick turnaround at UCLA under Jim Mora, who didn't find the cupboard nearly as bare as Harbaugh did in Palo Alto but obviously has exploited those resources in a way that his predecessors, Rick Neuheisel and Karl Dorrell, never could. Hundley is an instant hit who should have been playing last year as a true freshman; including Hundley, 14 of the Bruins' 22 starters tonight are scheduled to be back next year, most notably emerging defensive stars Anthony Barr and Tevin McDonald and four-fifths of an offensive line made up almost exclusively of freshmen and sophomores. Already they've seized the local momentum from USC. The next step – UCLA's first conference championship since 1998 – is closer than anyone could have imagined.