Reaction Time: Wake Up the Uprights

Notre Dame and Nebraska get lucky (not that there's anything wrong with that) and more reflections on Saturday's raucous afternoon slate.

Share All sharing options for: Reaction Time: Wake Up the Uprights

1. Notre Dame 29, Pittsburgh 26 (3OT).
I try to maintain a zen perspective on games like this, which are, after all, a normal and often healthy phase in the lifespan of an undefeated season. Is Notre Dame "lucky" to escape with its perfect record intact? Without a doubt: There is no other word for a team that fumbles the ball away at the goal line in overtime, as the Irish did in the second OT session against Pitt, only to have its life spared by a matter of inches.

That is pretty much the definition of a lucky break, and it is nearly impossible for a serious contender – especially a relatively low-scoring, defensively oriented contender like Notre Dame – to survive a regular season without one. The beneficiaries of crucial missed field goals, specifically, is legion: In the last six years alone, five different teams (Florida in 2006, Alabama in 2009, Auburn in 2010, Oregon in 2010 and LSU in 2011) have gone on to play for the BCS championship after kicks that could have brought their runs to a screeching halt either missed or were blocked in the regular season. In the cases of Florida, Alabama and Oregon, losses in those games would have constituted stunning, embarrassing upsets.

In this case, I'd be harsher on the Irish's close call if a) They hadn't already proven themselves (repeatedly) capable of much stronger performances against much better competition, and b) They hadn't also done tangible, non-lucky things like rallying from a 14-point deficit in the fourth quarter, holding Pitt to 1-of-14 on third downs and outgaining the Panthers by more than 200 yards of total offense. In other, equally tangible ways, it was their worst game of the season: The defense gave up 172 yards rushing to Ray Graham and failed to force a turnover; the offense gave it away three times and came up empty on multiple scoring opportunities in Pitt territory. But a harrowing ending doesn't change the fact that sometimes, mere survival is its own virtue.

2. TCU 39, West Virginia 38 (2OT).
TCU limped into this game without its starting quarterback, on the road, off back-to-back losses for the first time in five years, its season threatening to spin out of control as the degree of difficulty increases down the stretch, and had two golden opportunities today to effectively call it a season. First, trailing 31-24 and facing 2nd-and-19 from their own 6-yard line with less than two minutes to play, the Frogs were able to exploit the chronic condition afflicted the West Virginia secondary which causes their brains to begin oozing out of their helmets at particularly inopportune moments:

That would be a 94-yard, game-saving – potentially season-saving – bomb from redshirt freshman Trevone Boykins to a wide, wide-open Josh Boyce, which tied the game at 31. That's exactly where it remained after West Virginia's Tyler Bitancurt pushed a game-winning field goal attempt wide a few moments later, with 13 seconds to go, giving the Frogs new life in overtime.

The second do-or-die moment came in the second frame of overtime, after TCU kicker Jacob Oberkrom returned the favor by shanking a 37-yarder on the Frogs' possession. This time, TCU turned back Bitancurt's would-be winner themselves, thereby saving the game (again) and forcing a second OT. Where of course West Virginia scored on its first play to pin the Frogs back against the wall. 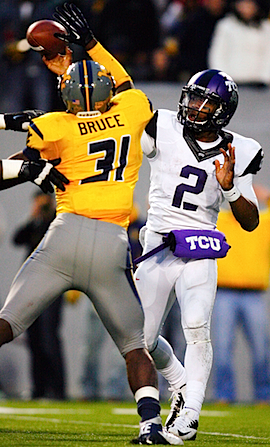 In that context, I don't think the decision go for two-and-the-win after TCU's subsequent response was much of a gamble at all: By that point, the Frogs were playing with house money. If nothing else, they'd already proven – repeatedly – that they have no intention of going down without a fight. Of course, it always looks smart when the guy makes the catch, as Boyce did by scooping a low throw from Boykin off the turf for the win. But after you've fought your way off the ledge, it's only natural to welcome the opportunity to take the therms of your survival (or not) into your own hands. Or, you know, into Josh Boyce's.

Now: Where is West Virginia's head after blowing multiple opportunities to snap a two-game losing streak of its own? The Mountaineers are still less than a month removed from ascending into the top five with every Big 12 and BCS goal in front of them, which barely seems like the same season at this point. The biggest goal within their grasp now is probably the Buffalo Wild Wings Bowl, and with Oklahoma and Oklahoma State looming over the next two weeks, even that's beginning to look a little pie-in-sky.

3. Texas 31, Texas Tech 22.
When is the last time Texas fans have felt so relieved about a win over Texas Tech? Coming out of a dreadful October, the Longhorns got exactly the answers they were hoping for from their beleaguered defense, which bent but ultimately did not break in holding the Red Raiders to just 22 points, and especially from their sophomore quarterback, David Ash, last seen looking on from the bench as Case McCoy led the offense to a come-from-behind win at Kansas. After Ash's flop against Oklahoma – along with the rest of the team's – there were more than a few in the Burnt Orange set who hoped he'd stay there.

But Ash was back in September. Texas scored touchdowns the first three times it touched the ball, never turned it over and never trailed en route to taking its third straight. With blue-chip tailback Malcolm Brown still on ice due to an ankle injury, the Horns also got another reassuring effort from their other blue-chip tailback, true freshman Johnathan Gray, who went over 100 yards rushing for the second consecutive week and finished with 147 from scrimmage. As banged-up as it is, I'm not sure I can envision this team running the table over the last three games, especially when one of them includes a trip to Kansas State for the finale. (K-State has owned Mack Brown even in years when it's not an upstart national contender.) If it does, though, I can envision a BCS bid waiting for it under certain circumstances, which would have seemed fairly ludicrous a week ago.

4. Nebraska 28, Michigan State 24. I have a pretty rigid standard for calling out/examining bad calls, which involves exactly one question: Did the call directly influence the outcome of the game? Otherwise, I'm not that interested. In the case of the late, probably bogus pass interference call against Michigan State's Darqueze Dennard – proud owner of two interceptions earlier in the game – I'm interested. The call singlehandedly put Nebraska in position for the winning touchdown, when it should have been left praying for overtime, at best. 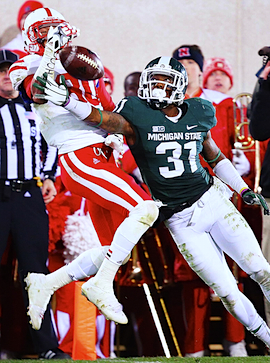 The flag came with Nebraska trailing late in the fourth quarter, 24-21, and facing a potential 4th-and-10 from the MSU 20-yard line after an (apparently) incomplete pass into the end zone; no flag on the play, and the Cornhuskers are forced to line up for a 37-yard field goal just to tie. Instead, the phantom penalty set them up with a first-and-goal at the Spartan 5, from whence Taylor Martinez hit Jamal Turner for the dagger with six seconds to go. The penalty alone flipped the odds of Nebraska completing the comeback from somewhere well below 50 percent to somewhere above ninety.

That said, Michigan State would have much more room for complaint if it had not allowed 313 yards rushing, or been outgained by more than 100 yards of total offense overall, or left points on the board on four separate trips into Nebraska territory, or managed a single sustained drive in the fourth quarter instead of three consecutive punts on its final three turns with the ball. (Of course, Nebraska had its complaints about the refs, too.) The Cornhuskers played a sloppy, turnover-filled game on the road, but ultimately made enough to put itself in a position to benefit from a little luck, and took advantage of it. They're still in the driver's seat in the Legends Division as a result.

5. Indiana 24, Iowa 21.
Speaking of the Big Ten standings: It's November, and Indiana – Indiana which is Indiana – is still relevant in them. True, the Hoosiers still have a losing record overall (4-5), and have yet to beat a team with a winning record. (With this loss, Iowa now stands at 4-5, too.) Their five-game losing streak earlier in the season was bookended by losses to Ball State and Navy.

But: That skid also included legitimately close calls against Michigan State and Ohio State, and was finally snapped last week with the end of Indiana's 11-game conference losing streak against Illinois. Two in a row leaves the Hoosiers within striking distance of Wisconsin in the Leaders Division with the Badgers coming to Bloomington next weekend in a battle for third place – the sweet spot in the division this year behind the Ineligibles, Ohio State and Penn State. So for one more week, yes, it is still possible for Indiana to play in the B1G Championship Game, while remaining quintessentially Indiana.