Through eight games, the Crimson Tide have looked virtually unbeatable. Here's five ways the Tigers can beat them.

1. Make the Offense One-Dimensional. As previously discussed, the biggest difference in tonight's matchup and the one that yielded two end zone-averse, WWI-style slug feasts in 2011 is Alabama's passing game: All of a sudden, A.J. McCarron is the most efficient passer in the country and has four legitimate deep threats at his disposal. By the same token, though, LSU is second nationally in pass efficiency D and has been ruthlessly consistent when it comes to curbing big plays. (No one has completed a pass longer than 30 yards on the Tigers since the season opener against North Texas.) If McCarron can't make anything happen downfield – or doesn't have time – LSU's is probably the only defense in the country that welcomes the opportunity to take on Bama's ground game.

On the same note… 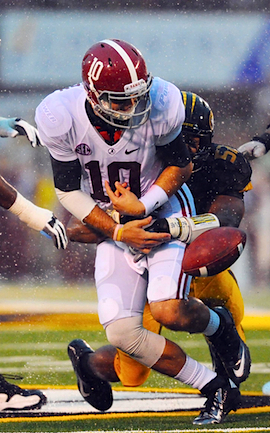 2. Hit A.J. McCarron. It can be done: Michigan, Missouri, Tennessee and Mississippi State have all recorded multiple sacks against Alabama, and Western Kentucky (!) got to McCarron six times back in September – three times by Quanterus Smith alone – which predictably didn't sit very well with Nick Saban. LSU has a pair of future first-rounders bookending the defensive line, Sam Montgomery and Barkevious Mingo, and 16 sacks in its first four SEC games. It has a dozen takeaways in those games, too, which is not a coincidence.

3. Take Your Shots. Obviously, no one expects Zach Mettenberger to put together sustained drives against Alabama's defense; he could barely get LSU on the board against Auburn. In general, his job description is to sit on the ball until it hatches. But the kid does still have an arm, and we have seen Alabama's otherwise oppressive secondary give up a couple of stray bombs to Michigan and Tennessee. If points are scarce as everyone expects, hitting that one big play on offense is the equivalent of winning Ohio in the election. <------topical

4. Special Teams Special Teams Special Teams. The kicking game was LSU's only obvious advantage in last year's 9-6 win in Tuscaloosa, thanks both to the Tigers' ability to flip the field – Brad Wing's 73-yard punt out of his own end zone was a decisive play in the fourth quarter – and the plague of missed field goals that cost Alabama the game. They're not going to get that lucky again, but in lieu of reliable gains on offense, a blocked punt or big play in the return game (hello, Odell Beckham Jr.) will do just as well.

Also: Where Les Miles is involved, an insane fake on a punt or field goal is always on the table. And it's probably going to work, too.

5. Remember: Punting Is Winning. If all else fails (and it will, repeatedly), kick the damn ball, play defense and wait for the other side make the big, fatal mistake. A punt is better than a turnover, especially with a guy like Wing who can launch bombs from anywhere on the field. If you're in a trench war, fight a trench war and count the casualties when it's over. But for god's sake, don't do anything that's going to leave the defense exposed in No Man's Land.