•ARTHUR BROWN, LB, Kansas State
Out of necessity, Oklahoma State spent the first two months of the season shuffling between a pair of freshman quarterbacks, Wes Lunt and J.W. Walsh, which in most systems would mean automatic doom. In Oklahoma State's system, the Cowboys are leading the nation in total offense and arrive in Manhattan with all Big 12 goals intact on the heels of a three-game winning streak. Precocious quarterbacking notwithstanding, the only way that's been possible is by a) Generating a reliable ground game and b) Protecting the quarterback. Through seven games, OSU is averaging 239 yards rushing, best in the Big 12, and yielded fewer sacks than any non-triple option offense in the country.

The extent to which we can imply causation in that relationship is the exact degree to which the Wildcats' most active defender has an opportunity to fuck the whole thing up. Against spread offenses, Brown is an all-purpose, sideline-to-sideline rover, but his main is still patrolling the running game between the tackles, where OSU tailback Joseph Randle has gone over 100 yards in six of seven games and is well on his way to leading the Big 12 in rushing. Kansas State is well on its way to leading the league against the run, having already held Miami, Oklahoma, Iowa State and West Virginia below 100 yards on the ground, and Texas Tech to not much more. If the Cowboys can't generate more than that for Lunt in just his second road start – he was was picked off four times in his first, a 59-38 loss at Arizona – it won't take long for them to begin feeling the icy grip of Snyderball begin to tighten around their throats.

•TAYLOR HART, DT, and DION JORDAN, LB, Oregon. It's tempting to shine a spotlight on Oregon's underrated corners, Ifo Ekpre-Olomu, Dior Mathis and Troy Hill, who draw the nightmare assignment of the day against USC's fire-starting receivers, Marqise Lee and Robert Woods. But let's be realistic: After watching Lee and Woods torch the Ducks last year for 240 yards and three touchdowns en route to a 38-35 upset in Eugene, and continue to terrorize Pac-12 secondaries at roughly the same rate over the first two-thirds of 2012, the odds are much better of disrupting the Trojans before the ball leaves Matt Barkley's hands. 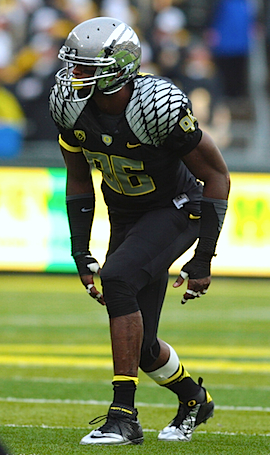 On that front, the Ducks stand a much better chance against a USC line that's been plagued all year by injuries and uncertainty – especially at left tackle, which remains a toss-up between disappointing sophomore Aundrey Walker and true freshman Max Tuerk. The winner of that in-house competition today gets to deal with Jordan coming off the edge, which could make Barkley the loser.

•JOE BERGERON, RB, Texas.
No team in college football has improved as dramatically in any single category as Texas Tech has improved against the run, rising from dead last nationally in 2011 to 27th this year under first-year defensive coordinator Art Kaufman, but the Red Raiders are beginning to show some cracks: Last week, Kansas State rolled up 193 yards and four touchdowns on the ground on 5.4 yards per carry, the fifth consecutive game Tech has allowed a little more on the ground than it did the week before. Texas is not exactly looking like Kansas State right now – far from it – but the Longhorns have churned out more than 200 yards rushing in back-to-back wins over Baylor and Kansas, and have certainly not forgotten steamrolling the Raiders for 439 yards on the ground last year in Austin.

Bergeron was the main beneficiary then, and has been again since a September ankle injury to Malcolm Brown. If the gap really has closed that much in just 12 months, he's still going to make the Raiders prove it.

•ANTHONY BARR, LB, UCLA
Rich Rodriguz's quarterbacks are not typically known as prolific passers, but Matt Scott has had his way with Pac-12 secondaries to the tune of 14 touchdown passes in the last four games alone. In the last two, wins over Washington and USC, Scott was not sacked, a trend the Bruins' top pass rusher will either reverse or sorely regret falling victim to.

•AMEER ABDULLAH, RB/KR, Nebraska
It is well established that Michigan State cannot score, or achieve much of anything on offense at all – in seven games against non-MAC opponents, the Spartans have failed to top 17 points in all but one, a 31-27 struggle at Indiana – but equally well established that the MSU defense is willing to suck anything that comes within its gravitational pull into the same vortex of despair: In their five losses, the Spartans have yet to give up more than 20 points, and have held Iowa, Michigan and Wisconsin to a grand total of two offensive touchdowns over the last three weeks.

As hard as they've been to come by, one or two big plays by Nebraska should be enough to do the Spartans in, and no one is more likely to supply them the Cornhuskers' all-purpose dynamo – on offense, or otherwise.