Had all gone according to plan, Teddy Bridgewater probably would not have played tonight. When it didn't, he punched Louisville's ticket back to the BCS.

Louisville 20, Rutgers 17
- - -
1. The basic premise of this game was so absurd – a proud new member of the ACC going head-to-head with a proud new member of the Big Ten for the championship of an imploding Big East – that the new conference commissioner didn't even bother to acknowledge it with his presence. It's hard not to read tonight as a swan song for the Big East as we've known it for the last 20 years: A convenient hodgepodge of aspiring independents, up-and-comers and vagabonds with no other place to go, just good enough to earn a seat at the adults' table during its first decade, and then to keep it in its second even while existing in reality in a bizarre limbo state between the Haves and Have-Nots. After this year, the league will be increasingly unrecognizable, like a body that goes on living after gradually replacing all of its original cells. When Pitt and Syracuse move int with the ACC next year, they'll leave behind just two of the eight flagship schools that made up the original Big East football lineup in 1991, Rutgers and Temple; when the Scarlet Knights shove off for the B1G in 2014, they'll leave the Owls as the only remaining member that played football in the Big East before 2004 – the same Owls who were kicked out in 2005 for all-purpose futility, and were only allowed back in last year as the most convenient option for filling the void left by West Virginia's jump to the Big 12. This league has always existed for the sake of convenience, and not much else. 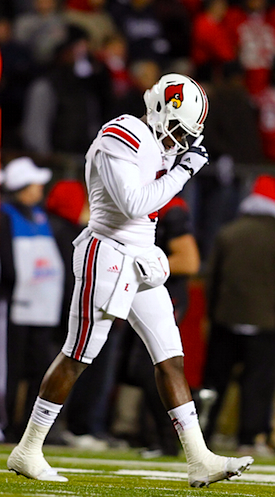 Which is how you wind up with a BCS rep that was many times more enthusiastic about leaving the conference than it was tonight about actually winning it. The Big East gets one more season with a BCS bid waiting at the end of the faint, rust-colored rainbow. After that, these Thursday night showcases that the conference has relied on so heavily from the beginning to build its brand are going start getting fewer and further between, both figuratively and geographically. With the automatic BCS bid, the stakes in Piscataway were clear, tangible and high. When will we get to say that about Conference USA Redux?

2. The other thing that happened tonight was that America saw Teddy Bridgewater move into the very crowded echelon of second-year quarterbacks (Manziel, Mariota, Hundley, Golson, et al) who will serve as the Faces of College Football in 2013. Not that Bridgewater was a secret or anything – given the hype and drama that followed him as a recruit, he was a headliner before he set foot on a college field, and has backed all of it up – but his effort off the bench, rallying Louisville from a double-digit deficit in the second half on essentially one leg, is going to prove far more durable in the minds of everyone who saw it than any of the passing records he has left to obliterate over the next two years. Immediately after the game, we learned that Bridgewater was too banged up to practice at all this week, and given the choice, I think Cardinal coaches would have preferred to leave the game entirely in the hands of backup Will Stein for as long as they could get away with it. That turned out to be exactly one quarter: The embargo on Bridgewater was lifted in the second, with Rutgers already up 7-0, and he spent the rest of the game with a visible hobble that ruled out scrambling, rollouts or just about anything that didn't involve standing and delivering from the shotgun. I'm not sure he even could have handled the routine footwork on dropbacks and handoffs if he had been taking snaps from under center.

But in those three quarters, Bridgewater hit 20-of-28 for 263 yards and two touchdowns, both coming in a span of 16 seconds on back-to-back touchdown passes that put the Cardinal in front in the third quarter. In the fourth, he delivered the throw of the night, an NFL-worthy heater to Eli Rogers covering 33 yards on 3rd-and-12 from deep in their own territory. A few minutes later, he hit Andrell Smith for 30 to set up the go-ahead/eventual game-winning field goal, on a ball that left Bridgewater's hands before Smith even hit his break. For the year, Bridgewater's performance has been easy to overlook, given how rarely he's had the opportunity to play for a national audience, and even easier to dismiss, given the competition. But since the start of October the guy is averaging 331 yards per game on 9.5 per pass, with a touchdown-to-interception ratio of 4-to-1, as a true sophomore. Had he actually been healthy enough to play a full game tonight it may not have been close. Next year, it won't be. 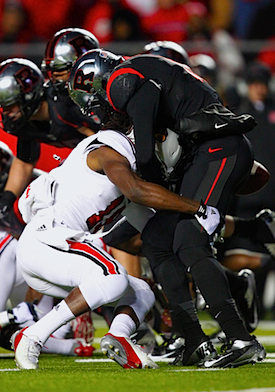 That said, the turning point here wasn't Bridgewater's entry in the second quarter, but Rutgers' fake field goal attempt in the third. Initially, the fake resulted in a touchdown pass that would have put the Scarlet Knights up 21-3 and might have put the game away, had it not been negated by a penalty for an ineligible man downfield. Scarred by the boldest possible call in that situation, the Scarlet Knights responded with the meekest possible call, a punt from the Louisville 31-yard line that netted 21 yards and instantly doomed the Knights for their lack of fortitude.

From there, Louisville marched 90 yards for its first touchdown to pull with four points, 14-10, and went ahead after Rutgers fumbled the ensuing kickoff. On such turns rest millions.

4. I hate to be the moron who attempts to make a point by saying, "Well if you take away their big plays…" because of course big plays are… you know, big. But in this case, Rutgers' two long touchdown passes covering (respectively) 85 and 68 yards in the first half were the only reason the Knights were in the game at all. Otherwise, the offense was pathetic. Gary Nova's other 26 passes yielded just 131 yards, or five yards per attempt, in large part because of costly, unforced drops by Knight receivers. (The interception that led to the game-winning field goal was a result of a deflected pass that should have been caught; the gently floating interception that ended the game may have been the result of a botched route.) Worse, the Knight ground game yielded a paltry 54 yards against the second-worst run defense in the conference, on a long gain of nine. There was nothing resembling a sustained drive.

In fact, the Knights' most time consuming possession of the night took just 2:29, resulting in a short-field field goal following Louisville's only turnover early in the fourth quarter. For the game, the Cardinals held the ball for nearly 42 minutes to Rutgers' 17:52, which pretty much sums up the night once they stopped letting RU receivers run past the secondary. 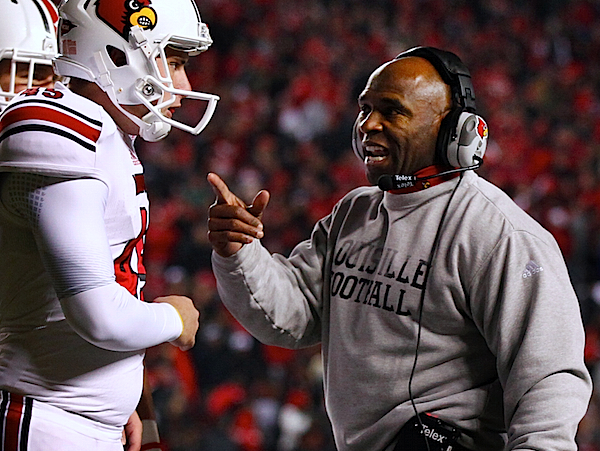 5. Now would be the appropriate time to point out that if this is the last game for Charlie Strong on a Louisville sideline – or the next-to-last – he has succeeded in bringing the Cardinals full circle, more quickly than anyone expected. Remember, the program Strong inherited from Steve Kragthorpe in December 2009 was coming off three consecutive seasons devoid of progress, hope or a bowl game in the wake of the best season in school history in 2006. As it turns out, what took three years to break has taken three years to fix, and there is a very good chance Strong is about to be rewarded handsomely for it – that is, if he wants to be, which is much less certain with the Cardinals now set to remain at the adults' table when the new playoff format goes live in 2014.

More to the point, why would he want to take on another rebuilding job before seeing this one through? Including Bridgewater, 17 of Louisville's 22 starters tonight are scheduled to return next year, as will top tailback Senorise Perry, a victim of a season-ending ACL tear that cost him the last two games, and Bridgewater's favorite target in 2011, Michaelee Harris, who missed the entire season to an ACL injury. The schedule is manageable, to say the least. Any team this young, returning this quarterback, that has already achieved this level of success, is a lock to open the following season in the top 20, if not higher, and to make a return trip to a big-money game. How well they comport themselves in the one right in front of them will go a long way toward determining just how high the 2013 ceiling can go.