Top 25: Every Buckeye in its right place

Sorting out Ohio State's place in the pecking order on the heels of its 12-0 finish, comparing resumés in the SEC and sorting through the wreckage of the bottom half of the poll in this week's rankings.

Share All sharing options for: Top 25: Every Buckeye in its right place

First things first: Notre Dame is number one. After wins over Michigan, Miami, Stanford, Oklahoma and now USC to clinch a perfect season – the last two on the road – the Irish's place at the top probably goes without saying, but for a small handful of voters in the Coaches and Harris polls, apparently it does not. Maybe they're still too hung up on some of the Irish's less-than-Herculean efforts to notice the suffocating consistency of the nation's No. 2 scoring defense, or maybe they're just not paying attention. But let there be no doubt: Whatever you think of the offense, and whatever happens in Miami in January, at the end of the 2012 regular season, the Notre Dame Fighting Irish are the No. 1 team in college football. Just for the record.

The case for their undefeated counterpart, Ohio State, is not nearly so clear. Last week, I was admittedly at a loss re: the Buckeyes' place in the pecking order, due much more to skepticism about the mediocrity of the Big Ten schedule – and their own close calls therein against the likes of Michigan State, Indiana and Purdue – than any qualms about elevating a team on probation. Beating Michigan over the weekend isn't much help, because how good is Michigan? Aside from OSU, the Wolverines' other three losses all came at the hands of top-20 opponents (Alabama, Notre Dame and Nebraska) with combined records of 33-3, and one of those three was Nebraska's head-to-head loss at Ohio State. On the other hand, Michigan only beat one team that finished with a winning record, Northwestern.

So with the possible exception of Oregon, the Buckeyes are the only ostensible top-10 team that can't claim a victory over a fellow heavy hitter. Nebraska? Maybe, but the Huskers' own schedule – highlighted by the same second-tier victims that litter Ohio State's resumé – makes that a bit of a stretch.

Like last week, I settled on OSU at No. 5, splitting the difference between Florida, Alabama and Oregon on one side and Georgia and Kansas State on the other. Immediately above the Buckeyes, Florida has succeeded against a legitimately brutal schedule (see below), and Alabama and Oregon have been far more dominant against slightly tougher slates than Ohio State's; the blemishes on the Gators, Tide and Ducks' records are all "good" losses – that is, close calls against other ranked teams that all three had a legitimate chance to win at the end. Immediately below, Georgia's resumé has little to recommend it beyond the Bulldogs' win over Florida, and the Bulldogs were blown out by South Carolina. Kansas State ceded its foothold among the elite with its inexplicable flop at Baylor. For now, that's as close to a niche in this field as you're going to find.

• CROUCHING GATOR, HIDDEN DRAGON. This space has been openly in the tank for Florida since its heavyweight wins over LSU and South Carolina in mid-October, which was just about the time the value of its early win at Texas A&M really began to take off, leaving the Gators with pretty easily the most impressive kill list in the country. From that point on, ranking Florida has been an exercise in balancing cognitive dissonance: On one side of the scale, three increasingly impressive wins; on the other side, a head-to-head loss against a Georgia outfit with no other notable scalps on its wall and a series of uninspired efforts against the dregs of the schedule in November. (The near-miss against Louisiana-Lafayette alone was almost enough for me to relent to the consensus and drop the Gators behind UGA, strength of schedule be damned.) I didn't think they'd beat Florida State, and figured the Seminoles would finally make the job of reconciling the world-beating Gators on paper with the barely-scraping-by outfit that sleepwalked through the previous month that much easier. 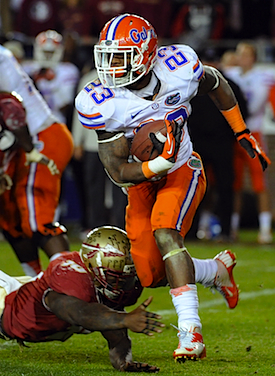 Of course, the question was resolved Saturday in the opposite direction. With its unexpected-but-emphatic fourth-quarter surge in Tallahassee, Florida picked up its fourth win over an opponent currently ranked in the top 15, regardless of which poll you're looking at – no other team has more than two – and buried most of the lingering doubts about the offense that had been steadily chipping away at their reputation. As I pointed out on Saturday, the defense has been outrageously good, hands-down the best in the nation both on paper and according to the "eyeball test." In September, the Gators held the soon-to-be Heisman winner to his worst game of the season in terms of total offense, and his team's worst on the scoreboard. In October, they hounded the highest rated passer in the nation into three interceptions and an efficiency rating barely halfway to his season average. LSU, a team that averaged more than 32 points per game in its other eleven, managed just six in Gainesville and failed to reach the end zone for the only time this season. South Carolina, a team whose only other loss came by two points in Baton Rouge, in a game the Gamecocks led in the fourth quarter, was laughed out of the Swamp in a 44-11 rout. And Florida State, a resurgent power that came in trashing opponents by upwards of four touchdowns per game, was just held to a season low on offense, by far, while giving the ball away five times.

Hell, at this point, even alarmingly competitive, non-blowout efforts against Bowling Green and Vanderbilt (both 8-4) qualify as respectable, double-digit wins over winning teams. For at least one more week, this is the best resumé in the SEC, and the best one-loss resumé in the country.

• THANKS FOR KEEPING OUR SEAT WARM. That said, it's still hard to imagine a scenario in which the winner of Saturday's Alabama–Georgia showdown in the SEC Championship Game doesn't hop the Gators into the No. 2 slot here next week. With the addition of another elite win in the strength-of-schedule category, both Bama and UGA have other compelling selling points – massive margin of victory for the Tide, head-to-head win over Florida for the Bulldogs – that ought to put either of them over the top to close out the regular season.

I hope that's easily recognizable as the hair-splitting it is. All three teams are effectively equals – as is the rest of the top dozen – and Florida, Oregon and Kansas State are all prime examples of why the damn playoff can't get here soon enough.

The result this week is an uneasy status quo: Oregon State, UCLA and Oklahoma State didn't move at all, and Texas actually moved up a spot after a sobering loss to TCU, sliding in front of plummeting Clemson. (The Tigers were hit a little harder because South Carolina was their last chance to prove their gaudy record wasn't merely a result of the cushy schedule. Even at 10-2, Clemson's best wins are over N.C. State and Ball State.) Instead of punishing the Longhorns, I rewarded TCU by moving the Horned Frogs back into the poll at No. 20. The other upset losers – Arizona, Washington, Louisville and Rutgers – I bounced with prejudice for losing games that by all rights should have been gimmes. (Okay, Arizona State was no pushover for Arizona, although the game was in Tucson. But Washington, you beat Oregon State and Stanford this season. Then you roll over and play dead for Washington State's lone conference win? Bad Huskies.) In their place, I promoted a couple of streaking MAC outfits, Northern Illinois and Kent State, going head-to-head this weekend for a possible BCS bid. I feel dirty enough just ranking a team that got blown out by Kentucky. Imagine how the Orange Bowl is going to feel if it's forced to send them an invitation. 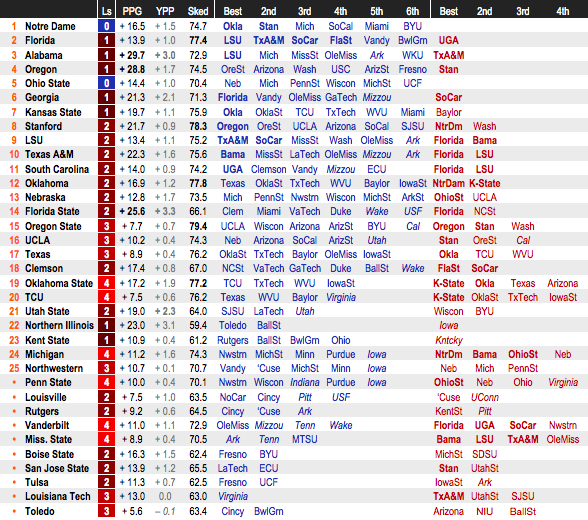