Around the Scorn: ACC docks off the Cardinal Coast

Another Big East school prepares to jump ship, Kentucky casts its lot with a familiar name and the living patriarch of Colorado football accused the athletic department overt racism, all in today's roundup.

Share All sharing options for: Around the Scorn: ACC docks off the Cardinal Coast

• WITH THIS MOVE WE REAFFIRM OUR COMMITMENT TO BETTER PIZZA, BETTER INGREDIENTS. On the expansion front, ACC president and chancellors are reportedly set to meet via conference call on Wednesday morning to vote on at least one potential expansion candidate, that one almost certainly being Louisville. The Cardinal would be immediately competitive in football, already embody the ACC's traditional emphasis on basketball and also expand the league's geographic footprint into a new state/market without getting all Louisiana Purchase about it. And did you know the Atlantic Coast actually extends 650 miles inland to a strategic point on the Ohio River?

Obviously, a conference defection of that magnitude is a long, long-term decision, but a footnote for SEC coaching searches: A Big East-to-ACC leap for the Cardinal will mean more money and better access to the forthcoming playoff kicking off in 2014, and therefore make their head coach, Charlie Strong, that much tougher to poach if it becomes official within the next few weeks. 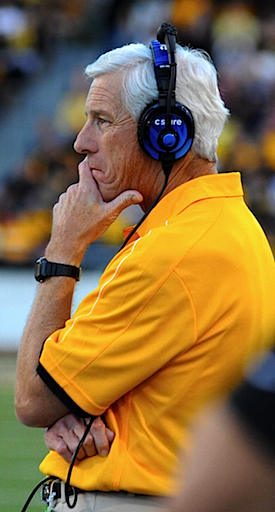 ONE AND DONE. Southern Miss just concluded the worst season in school history with a 42-24 debacle at Memphis, only the latest catastrophe in a winless campaign that had already included double-digit losses to East Carolina, Western Kentucky, Marshall, Rice and SMU, and first-year coach Ellis Johnson has paid accordingly with his job. Personally, as an alum, I would have preferred that Johnson take it upon himself to resign in disgrace and skip town without the university actually having to say "You're fired" after just one year – the program has already taken some heat for impatience over the exile of longtime winner Jeff Bower a few years back – but short of literally tying the guy up in a burlap sack and tossing him on a train this was the only option. By the end, attendance was about half what it should be, and still twice what this team deserved.

That's about all there is to say about that. Johnson inherited a program that had just produced arguably the best team in school history in 2011, immediately produced the worst, and turned one of the most consistent winners in college football into a ground-up rebuilding job virtually overnight. The athletic department is already more than a million dollars in the red, and this disastrous season – coinciding with the ongoing deterioration of Conference USA – is not going to help. The only selling point for this job right now is that there's nowhere to go but up.

• I'M SORRY, BUT THE CARD SAYS STOOPS. Now that we've processed the latest wave of obituaries over the weekend, we can move on to the first notable hire: By all accounts, Mark Stoops is the man at Kentucky, god bless him, at a point when conference expansion has made winning in Lexington as tall an order as ever. Which is saying something: In the past 35 years, the Wildcats have finished in the final polls exactly once, in 1984, and put together back-to-back winning seasons just twice, under Jerry Claiborne in 1983-84 and Rich Brooks from 2006-09. By most standards, Brooks' tenure was the best at Kentucky since Bear Bryant left for Texas A&M in the early fifties, and the Wildcats are currently coming off a 2-10 season under Brooks' successor, Joker Phillips, in which they failed to beat an SEC opponent.

For his part, Stoops has never been a head coach on any level, though he does come from the same household that produced the Fightin' Stoopses at Oklahoma, Bob and Mike, and spent the last decade in the pipeline: At Miami, he was the secondary coach on the juggernaut Cane teams that went 35-3 and sent five defensive backs to the NFL from 2001-03; at Arizona, he was groomed as a coordinator for what was then an up-and-coming program under brother Mike; and his last two defenses at Florida State both finished in the top 10 nationally in rushing, total and scoring defense. Now: If he can only recruit the likes of Bjoern Werner, Tank Carradine and Xavier Rhodes to shore up a Kentucky D that routinely finishes near the bottom of the SEC on all counts, he'll be in business.

• WE'RE ALL PROFESSIONALS HERE, PART ONE. Venerable L.A. Times hack T.J. Simers takes pride in his status as provocateur-in-residence among the locals, and his first broadside against first-year UCLA coach Jim Mora got a little traction, so why not go for broke?

That's Simers immediately following the Bruins' 35-17 loss Saturday against Stanford, not so subtly suggesting that Mora – South Division title already in hand – somehow "managed" the game to lose, thereby setting up a rematch at Stanford in the Pac-12 Championship Game rather than the trip to Oregon that would have been on deck if the Bruins had dealt Stanford its second conference loss. When Jim "We Don't Have Murders a Block From Our Campus" Mora comes across as the level-headed, cool-tempered adult in a contentious exchange, the other side has woefully miscalculated its cleverness.

• LEAVE NO BUFF BEHIND. Jon Embree was visibly stunned by his abrupt dismissal at Colorado after just two years, but his old coach, program patriarch Bill McCartney, was just pissed off:

After he read the letter, McCartney said the school did not give Embree, who is black, as much opportunity to succeed as they would have given a white coach. McCartney said the reason hs was given more than two year to work through losing seasons at CU was because he's white.

Honestly, I believe it's because I'm Caucasian. I believe black men have less opportunity, shorter time if you will," McCartney said.

"It's just like, Dan Hawkins got five full years. Why not give Jon Embree five years? You signed him to a five-year contract.

"Men of color have a more difficult road to tread. It didn't happen to me. Why should it happen to a black man?"
[…]
"I heard the chancellor (Phil DiStefano) said it didn't matter what color Jon was. I think that offends every person of color out there," McCartney said. "This guy can match wits with any white guy out there. He's the real deal." 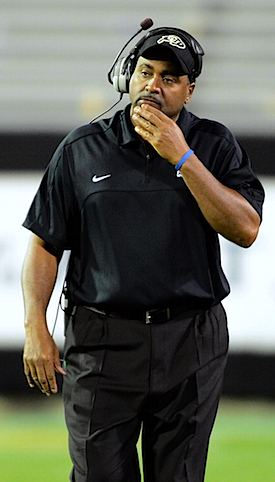 Okay, just a little bit patronizing there at the end, but the point is clear enough. It's no surprise that McCartney takes Embree's exit personally: Embree played for McCartney on the teams that initiated Colorado's transformation from a laughingstock to a powerhouse in the mid-eighties, and McCartney was instrumental in endorsing Embree for the job in 2010. Earlier this year, McCartney rode to Embree's defense on the heels of the worst loss of his tenure, a 69-14 debacle at Fresno State that wasn't as close as the score, publicly reminding boosters that his own tenure got off to just as rocky a start.

When McCartney was hired in 1982, Colorado had won just seven games in three years under his predecessor, Chuck Fairbanks, and went on to win just seven in McCartney's first three seasons; in his third year, 1984, the Buffs finished 1-10, with six of those ten losses coming by at least 17 points. Today, of course, that record would guarantee the axe at any major program in the country. At the time, though, the university decided to stick with McCartney, and eventually reaped the rewards. In 1989, Colorado broke through with an 11-0 regular season, narrowly missing out on a national championship in an Orange Bowl loss to Notre Dame; the following year, 1990, the Buffs finished the job by beating the Irish in an Orange Bowl rematch to claim the Associated Press crown. (As always, bitter Missouri fans and Notre Dame fans may register their long-simmering complaints from that season in the comments.) From 1989 to 1996, Colorado won three Big 8 championships under McCartney and his successor, Rick Neuheisel, and finished in the top ten of the final polls five times – all less than a decade removed from rock-bottom.

In a prepared letter, McCartney called the premature termination of Embree's contract "an indictment of true integrity" and encouraged "men and women of Colorado" to "stand up and be counted" in their opposition. Under the circumstances, maybe he should have asked them to pony up enough money to buy out the guy who hired and fired both Hawkins and Embree, athletic director Mike Bohn, and then to go after a respectable candidate who might actually be willing to scale this mountain.

• WE'RE ALL PROFESSIONALS HERE, PART TWO. There is a moment during this question after Penn State's overtime win over Wisconsin when you can almost see a thought bubble appear above coach Bill O'Brien's head with the words, "What the hell am I doing here?"

Bizarro press conferences notwithstanding, O'Brien confirmed Tuesday that he will be back at Penn State in 2013, as if there was any question on the same day he was named Big Ten Coach of the Year. ("Thank you all very much, and I'll see you chumps later!") With a solid debut under his belt and the obvious respect/affection from Penn State fans, I'd be stunned if O'Brien wasn't around to see the lifting of NCAA sanctions in three years.

QUICKLY…
preemptive legal strike to force Maryland into ponying up the full $50 million it owes the conference en route to the Big Ten.
• More evidence that the NCAA really was out to get USC in the Reggie Bush case.
• Georgia Tech asks the NCAA for a waiver to go to a bowl game with a losing record.
• Tulsa's athletic director is suspended after being identified by the FBI as an "admitted gambler."
• In the same game in which he was passed as the national sack leader by his teammate, Bjoern Werner, Florida State's Tank Carradine suffered a torn ACL.
• Brady Hokes expects quarterback Devin Gardner to earn a fifth year of eligibility at Michigan.
• Texas will go to Kansas State this weekend without its starting quarterback.
• Jon Gruden is still dominating the wish list at Tennessee, despite the fact that Jon Gruden ain't said shit about Tennessee.
• When the time comes, Chip Kelly's successor at Oregon is probably already on his staff.
• Zach Mettenberger likens Les Miles' dancing to the seizures of an epileptic dog.
• The best piece of writing you will ever read about Richard Simmons.
• And leave it to The Onion to craft the perfect summery of Gene Chizik's tenure at Auburn in just twelve words.