Conference USA by any other name would smell as weak

As of today, fully half of C-USA's current membership is scheduled to be playing football in the Big East by 2014, at which point at least two-thirds of the Big East's membership will be made up of ex-C-USA refugees

Share All sharing options for: Conference USA by any other name would smell as weak

It's not like anyone has ever confused the Big East for a major major conference, especially since Miami and Virginia Tech bolted for the ACC in 2004, and its diminished status was formalized earlier this month with its relegation to the children's table in the forthcoming playoff format. But for me, at least, today was the day the mental switch flipped on the reality: When the current contracts expire and realignment begins to settle down in 2014, the Big East will not just be straddling the borderline between the "Have" and "Have Not" leagues, but will be a full-fledged, dyed-in-the-wool Have-Not.

This was already true – it was basically inevitable from the moment the Big Ten initiated the realignment rodeo back in 2010, and has only become more so as literally every member of the Big East at that time has either jumped ship or is actively seeking to – but it finally took today's out-of-nowhere, thoroughly inexplicable addition of Tulane to the roster to connect the final dot in my BCS-conditioned brain. Tulane. Tulane which effectively gave up on big-time football 60 years ago and has generated four winning seasons in the last thirty. Tulane which regularly plays in front of 50,000 empty seats in the Superdome and is less than a decade removed from seriously considering giving up Division I football altogether. Tulane which remains a Bermuda Triangle for head coaches. Tulane which is Tulane. 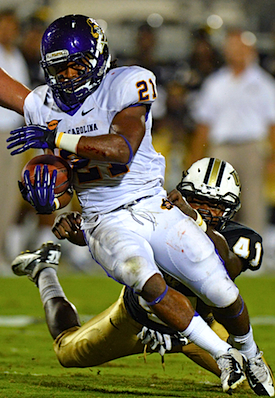 Even from a completely cynical, market-oriented, "Eyeballs on Screens" perspective, Tulane makes no sense as a positive, forward-thinking addition. New Orleans, while remaining the single greatest city on the face of the earth, is not a valuable television market, ranking just behind Providence-New Bedford and just in front of Wilkes Barre-Scranton among the top 100 markets in the U.S. By that standard, the city was losing ground even before the cataclysm of Hurricane Katrina reduced the population by half. To the extent that it is valuable, the local market is overwhelmingly dominated by LSU, not Tulane.

To its credit, the university is making a serious commitment to athletics by investing in new practice facilities for basketball and football and a long-awaited, on-campus football stadium in the Garden District, which should be a dramatic upgrade over the cavernous dome downtown. It will instantly become the best road trip in the conference. But in terms of tradition, fan base, competitiveness or eyeballs on screens, it brings nothing to the table.

Making the leap alongside the Green Wave, it's East Carolina, which has been openly lobbying for a Big East invite for so long it doesn't even care that it's basically joining its old band mates under a new name. As of today, fully half of Conference USA's current membership is scheduled to be playing football in the Big East by 2014, at which point at least two-thirds of the Big East's membership will be made up of ex-C-USA refugees: 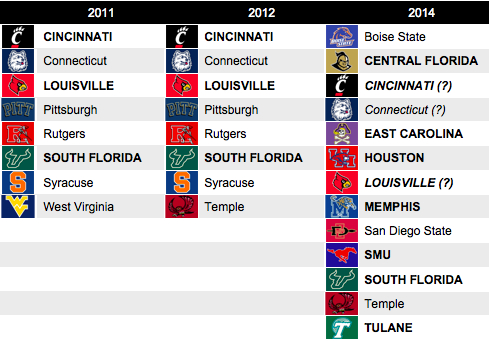 The C-USA takeover holds true even if original fugees Cincinnati and Louisville are thrown life lines from the ACC or Big 12 to save them from the shame of finding themselves back at the kids' table after nearly a decade of being treated like grown-ups. Either way, Rutgers' pending defection to the Big Ten has severed the Big East's last remaining tie to both its pre-2005 football membership – literally, not one single school that played football in the Big East in 2004 will be on board in 2014 – and its ostensible geographic footprint in the Northeast. (UConn is a likely defector to the ACC, too.) If survival is the ultimate goal, congratulations: There will be Big East football for the foreseeable future. But it won't be worth as much, and the tenuous, cross-continental hodgepodge its assembled for the sake of its own existence will only hold as long it takes for the next tremor to arrive.