Thanks to Notre Dame, the championship match-up is all but official, as are at least seven of the remaining eight spots in the other BCS bowls. Then it gets interesting.

Share All sharing options for: BCS Realpolitik: Returning to glory since Saturday night

In a perfect world, the Bowl Championship Series would not exist, and it can't go away fast enough. Until it does, though, we still live in the world we live in. So each Sunday night we examine what the new BCS numbers mean for the rest of the season. Rooting interest: Chaos. Always chaos. 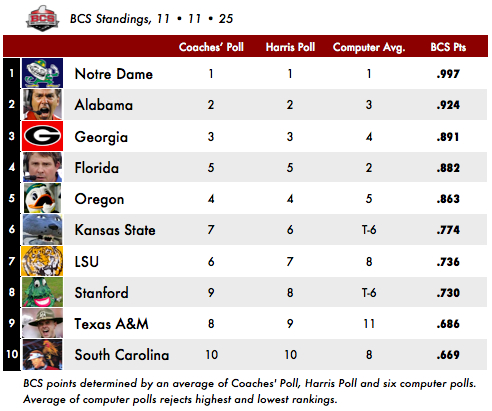 Yeah, well, so much for chaos. Notre Dame's win at USC leaves no more wiggle room for BCS fanfic: The Irish have booked their tickets to Miami for the championship game, where they will face the winner of this weekend's SEC Championship showdown between Alabama and Georgia. No might, should, could or probably necessary. The Fighting Irish will play the SEC champion for the national championship. Period. All that's left now is that brutal 45-day turnaround.

The only remaining footnotes in the race for the top concern a) The computer polls' ongoing preference for Florida and its impressive collection of high-ranking scalps over either of the Gators' Atlanta-bound conference mates, a subtle (and ultimately irrelevant) repudiation of the status quo that hold in next week's final standings; and b) The exclusion of Ohio State on the heels of the nation's only perfect season outside of South Bend. The Buckeyes' case will get no sympathy in this space, and not much elsewhere due to the lack of elite victims on the schedule and the NCAA sanctions that are (justifiably) keeping OSU out of the mix. But in any review of the best teams in college football in 2012, clearly Ohio State has entrenched itself in the conversation.

So the Buckeyes are duly acknowledged. For our purposes, they remain irrelevant. 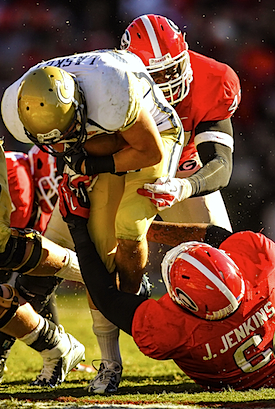 MOVING DOWN THE LINE. The rest of the BCS matchups are more or less set, pending a few details. Oregon is bound for the Fiesta, almost certainly against Kansas State if the Wildcats wrap up the Big 12 crown against Texas; Florida is a lock for the Sugar Bowl; Florida State is in line for the ACC's automatic slot in the Orange Bowl, the winners of the Big 12/Pac-12 championship games for the Rose Bowl. The winner of Thursday's Louisville/Rutgers game) will take its place as the Big East champ opposite Florida in the Sugar or Florida State in the Orange. That leaves one at-large spot, presumably – assuming it avoids an upset Saturday at TCU – reserved for Oklahoma.

Of those ten slots, only the second invitation to the Big 12 is in any doubt whatsoever.

• FREE MY PEOPLE FROM THE BONDAGE OF THE LITTLE CAESARS PIZZA BOWL. Which brings us to our next little drama: Is the second invitation to the Big 12 in danger of being intercepted by a fast-rising underdog from outside of the "Big Six" conferences? As of last week, the question seemed irrelevant: The highest-ranked "mid-major" outfit was Boise State all the way down at No. 22, far from the threshold for mid-major conferences established by BCS rules:

With Big East frontrunners Rutgers and Louisville sitting in front of Boise at No. 18 and No. 20, respectively, the Broncos came up well short of both of those standards. Then, both Rutgers and Louisville lost over the weekend, as did No. 15 Oregon State, No. 16 Texas, No. 17 Texas, No. 19 Michigan and No. 21 Oklahoma State – a veritable parting of the red seas for the little guys to ascend to the cusp of eligibility. Surprisingly, the team that made its move was not Boise State, but Kent State out of the MAC, which climbed all the way to No. 17 on the strength of favorable numbers from the computer polls. One little bump, and the Golden Flashes – the Golden Flashes, which have not been to any bowl game of any stripe in four decades – will automatically occupy the slot currently reserved for the Big 12 runner-up, regardless of where the Big 12 runner-up happens to ranked next week in the final standings. 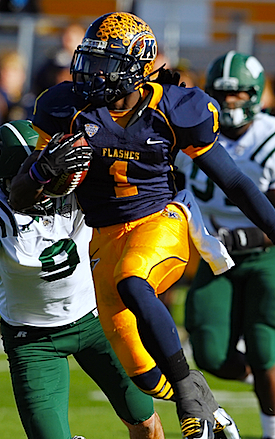 Ah, but that last step, it's a doozy. To have any chance, Kent first has to beat the defending MAC champ, Northern Illinois, in Friday night's MAC Championship Game, which could conceivably double as another play-in game for the final at-large bid. (NIU is 21st in this week's standings, and could earn enough of a bump in both the human and computer polls for beating another ranked team to move into the top 16 itself.) From there, which current member of the top 16 is the insurgent MAC champ going to replace? The obvious candidate is the current No. 16, UCLA, which has to go to Palo Alto Friday for a rematch with the same surging Stanford outfit that just steamrolled the Bruins over the weekend for the right to home-field advantage in the Pac-12 title game. If UCLA loses, any one of Kent, Northern Illinois or possibly Boise could all fill the void.

If the Bruins pull the upset, though, it is a long shot to say the least to expect Stanford to tumble all the way from No. 8 in the current standings to No. 17 (or worse) in a single week, especially when the computer polls should still have the Cardinal's back for enduring such a heavy-handed schedule. An Oklahoma loss would be ideal, but doesn't look very likely from here; ditto Oregon State in its hurricane-delayed date against Nicholls State. A Texas win at Kansas State that prevented Kent or NIU from making the necessary leap over the Longhorns is the worst-case scenario. So even for the winner, the potential stakes in the MAC title game range from the Orange Bowl to the GoDaddy.com Bowl, with nothing in between,

• TIGER DRAG. This would be a vastly different scenario if USC had managed to knock off Notre Dame, but under the circumstances, the only team that lost ground over the weekend is Clemson: Although Florida State had already locked up the Atlantic Division's slot in the ACC Championship Game, a win over South Carolina could have put the Tigers in the position Oklahoma is in now, in the driver's seat for the final at-large bid – except that the Tigers, unlike Oklahoma, wouldn't have had another game to play to hold on to that status. In fact, Clemson could still replace Oklahoma as the de facto tenth BCS team if the Sooners lose at TCU and the barriers hold against the MAC insurgency. If one of the little guys does claim the last ticket, it's just as well that they've already resigned themselves to what should be a very good Chick-Fil-A Bowl.