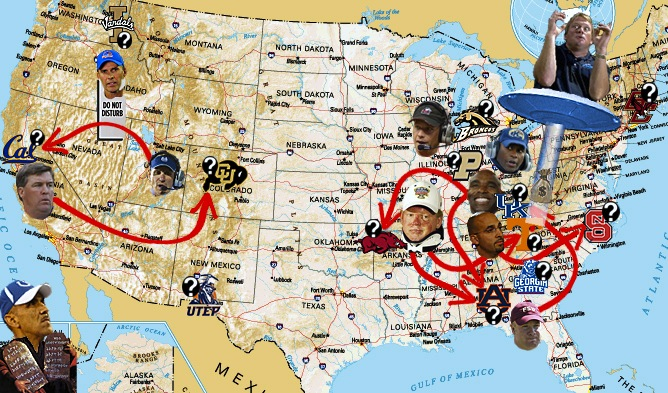 • COLORADO. Jon Embree is out after two years and four wins at his alma mater, and surprise! He is not very happy about it:

The announcement surprised Embree, who said athletic director Mike Bohn had been "consistent" as recently as last week in telling him he would return for a third season despite his record.

"I had a funny feeling this morning," Embree said in a phone interview Sunday night. "Something told me he'd do this."

Embree said Bohn told him about 5:30 p.m. Embree had been planning to head out on the road for recruiting early this week.

"He said he didn't feel the trajectory of the program was going in the right direction,". Embree said. "I said, 'What direction was it going when I got hired?' "
[…]
""'m disappointed," said Embree, who is owed a $1.5 million buyout. "I'm mad. I had trouble looking at those kids and seeing their reaction. It's hard. I loved those kids. I was trying to be an impact on their lives."

Embree also pointed out that his team is still hopelessly young and showed "promise," which is debatable – the Buffs won one game in 2012, and none at home for the first time since 1920 – but the axe was an especially cold one considering a) Embree was a homegrown hire with a personal investment in Colorado, having grown up in the state and once played for program patron Bill McCartney, who publicly endorsed his old player for the job and rallied to his cause when the Buffs were at their worst; and b) He really did seem to believe he was safe, telling reporters after last Friday's heartbreaker against Utah that Bohn had been "consistent" in assuring him he would be back next year. At that point, he was already mulling a couple of big changes for 2013, namely moving to a more spread-friendly offense and shaking up the coaching staff. Obviously, he was not prepared to be shaken out himself. 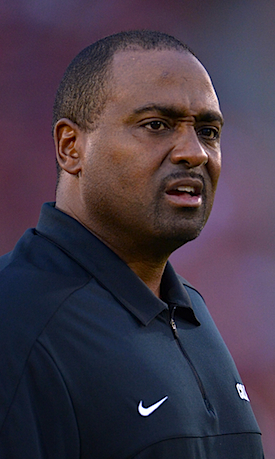 The initial list of possible replacements consists of the usual suspects – Troy Calhoun, Sonny Dykes, Mike MacIntyre… uh, Jeff Tedford? – but whoever comes next, he's looking at the same hole Embree found two years ago, and Dan Hawkins before him: An overmatched depth chart, no natural recruiting base, a relatively indifferent fan base and facilities that rank far behind the Pac-12 curve. On the other hand, a cash-strapped university on the hook for a second buyout in three years can hardly afford to be so trigger-happy the next time around.

• N.C. STATE. Outsiders were caught off guard Sunday by the seemingly abrupt dismissal of Tom O'Brien on the heels of his third consecutive winning season – one that included a major upset of a top-10 opponent – although N.C. State fans seem to have seen this one coming from miles away. O'Brien was almost fired after a 7-5 regular season last year, and probably would have been had his team not rallied from a huge deficit in the season finale to secure a bowl bid. Again, the word here is "trajectory": The Wolfpack have stagnated following a 9-4 breakthrough in 2010, and other than the upset over Florida State, they were 0-3 this year against opponents that finished with a winning record.

Combine that with the fact that O'Brien is not exactly considered a bulldog of a recruiter – and wasn't hired by his current boss, athletic director Debbie Yow – and the impatience with recurring trips to the Belk Bowl makes a little more sense for the portion of the base that expects the team to be consistently competing for conference championships. (In case you were wondering, N.C. State hasn't won an ACC title since 1979. And no, you weren't dreaming last year: The Belk Bowl is still a real thing. Sorry.) Inevitably, the first name on the wish list on Sunday was Yow's old friend James Franklin, whom Yow once agreed to name as the heir apparent to Ralph Friedgen when both were at Maryland. That arrangement fell apart when Yow left for Raleigh, her successor blew up the coach-in-waiting deal – so he could hire Randy Edsall! – and Franklin fled to astonishing success at Vanderbilt. But if a more high-profile job does await, it looks like it won't be this one: Yow has already ruled Franklin out as a candidate.

• PURDUE. As expected, the Boilermakers pulled the plug Sunday on Danny Hope and Danny Hope's mustache after four years of completely predictable mediocrity and one notable entry into the gif Hall of Fame.

To reiterate, Purdue has qualified for two consecutive bowl games, N.C. State for three, and both just fired their coaches. So that's where we are now.

In a perfect world, Friday night's MAC Championship Game between 11-1 Kent State and 11-1 Northern Illinois would be staged as a reality show starring the two head coaches, Kent's Darrell Hazell and NIU Dave Doeren, in which the winner gets the option of taking the Purdue job or passing it to the loser while a studio audience screams "Pass! Pass! Pass!" Unfortunately, all of that is going to be happening behind closed doors instead of with cameras, even in 2012. 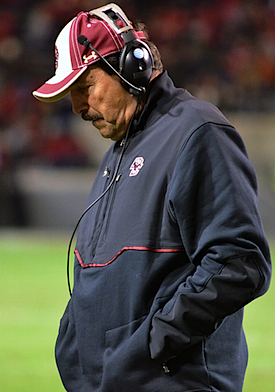 • BOSTON COLLEGE. Frank Spaziani has been a dead coach walking for so long – for like two years, at least – that B.C. fans who haven't developed some sort of perverse Stockholm Syndrome are started to get nostalgic about Tom O'Brien, which… well, see above. Remember: Before its dreadful, 6-18 turn over the last two years, Boston College had enjoyed twelve winning seasons in a row, with five finishes in the top 25.

Like Purdue, Eagle fans will probably be content at this point with an up-and-coming winner from the MAC, although their top target may not be on the field for Friday night's title game. And hey, now that the guy who fired him has been removed from the picture, the new athletic director might want to note that Jeff Jagodzinski is available.

• ET CETERA Southern Miss prepares the gallows by canceling Ellis Johnson's usual Monday media rounds, less than 48 hours after the Eagles were dragged across the finish line of an 0-12 season. … … And rumors of Gary Pinkel's pending resignation at Missouri appear to be greatly exaggerated.