At one point, FSU scored 20 consecutive points, and the second half belonged to the Seminoles. Then Florida achieved liftoff.

Florida 37, Florida State 26
- - -
1. There was a point in this game, in the third quarter, after Florida State had just ripped off its 20th consecutive point without Florida offering so much as a first down in response, when the Gators' jig appeared pretty well up. All season Florida has been the kind of team that thrives on the margins, devoid of reliable playmakers on offense, too often substituting opportunism for consistency, too content to just scrape by against the lower rungs of the schedule. Somehow, that had been good enough to take them to carry them to ten wins, and within one more of a guaranteed BCS game. It was also enough Saturday for a quick, 13-0 lead in the first half in Tallahassee.

But clearly at this point the tide had turned. The second half belonged to the Seminoles, just as it did when Clemson had the misfortune of meeting its maker in Tallahassee back in September, and the Gators' savvy lunchpail routine would carry them no further.

Then the fuse went off, and the resulting carnage redefined Florida's season in a span of 15 minutes.

2. It's not entirely reflected in the numbers, but mini-meltdown notwithstanding, this was UF's best offensive effort of the season by such an astonishing margin that it almost makes the impotence of the past few weeks look like some kind of rope-a-dope. In their previous four games against ranked opponents, the Gators averaged just shy of 22 points on about 248 yards, and the scoring average was heavily skewed by the turnover bonanza against South Carolina; in all games in October and November, they were averaging about 290 yards before Saturday, worst in the SEC. They worse the competition, the worse they looked.

Against the No. 1 defense in college football, they looked like the steady, opportunistic, ball-controlling bruisers of Will Muschamp's dreams, then exploded. Three of Florida's first four possessions were extended drives that (although they only resulted in six points) covered more than 50 yards apiece and ate up almost 16 minutes – more than half of the first half. When they caught a break, on a fumbled kickoff return in the second quarter, they cashed in with the game's first touchdown. After reversing the momentum in the fourth quarter, they ripped off 24 consecutive points in a little over ten minutes, their most concentrated outburst since the Tennessee game in September. 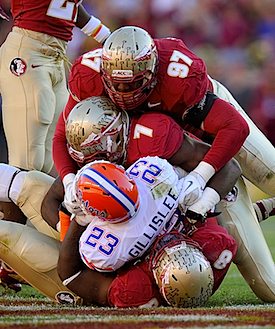 On the ground, UF's rushing totals exceeded season highs against Florida State by more than 100 yards on more than a full yard per carry. Mike Gillislee (24 for 140, 2 TDs) became the first opposing back over 100 yards against FSU this year; true freshman Matt Jones, heretofore relegated mainly to garbage time, added a career-high 81 yards and the knockout punch, on a 32-yard run that extended the Gators' lead to 17 late in the fourth. In their first eleven games, the Seminoles allowed one run covering more than 30 yards; on Saturday, Florida had three.

3. It's too late in the season for asterisks, but if you're going to apply one to any of the above, it would be to note that three of the Gators' four touchdown drives began inside the FSU 40-yard line following either a takeaway by the defense or a big play in the return game. Of course, the assumption coming in was that if any offense as uninspiring as Florida's had any chance whatsoever of matching Clemson's season-high against the Noles on the scoreboard – and it was a slim, slim chance – it was only by feasting on the same smorgasbord of turnovers it had dropped in its lap in the South Carolina game, which turned out to be undershooting it a bit: Where Carolina gave the ball away four times, FSU coughed it up five times, four of them courtesy of quarterback E.J. Manuel alone.

This time around, though, the offense was a bit more of a self-starter: Only two of those five takeaways led directly to points, and four of Florida's seven scoring drives began on FSU's side of the field. In fact, it was the Seminoles who benefitted the most from short fields: Both of their touchdown drives in the third quarter began inside the Gator 25-yard line.

4. Florida was a little bit chippy, picking up 12 penalties to Florida State's three, and the gap would have been even wider if Gator cornerback Jaylen Watkins had caught FSU lineman Bryan Stork as unaware as he seemed to expect:

At least the ACC won one inter-conference battle today.

5. I'm wrapping this up just as Notre Dame is putting away USC late, so there is no point arguing Florida's credentials as a contender for the BCS Championship Game relative to Oregon or Kansas State. And thank god: The Gators aren't going to win their conference and make a perfectly good fit in the Sugar Bowl, where they will almost certainly be going when the pairings are announced next week. There will be no all-SEC rematch in Miami, and it is good and right. But once you get past some of the close calls and other surface warts – and I think the late surge in this game may have convinced a lot of people to do that for the first time – win-for-win I'd still put Florida's resumé up against anyone's. 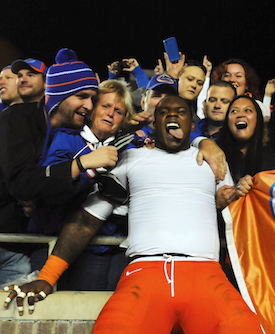 Including Florida State, the Gators have four wins over opponents who began the day ranked in the top dozen in the BCS standings – LSU, Texas A&M, Florida State and South Carolina – where only two other teams have more than one. (LSU and South Carolina have two apiece; Notre Dame will likely have two when the new standings come out on Sunday night and Oklahoma moves up.) Of the losses suffered by the other eleven teams in the top dozen, a full 25 percent of them – four of sixteen – have come at the hands of Florida.

In September, the Gators held the soon-to-be Heisman winner to his worst game of the season in terms of total offense, and his team's worst on the scoreboard. In October, they hounded the highest rated passer in the nation into three interceptions and an efficiency rating barely halfway to his season average. LSU, a team that averaged more than 32 points per game in its other eleven, managed just six against Florida and failed to reach the end zone for the only time this season. South Carolina, a team whose only other loss came by two points in Baton Rouge, in a game the Gamecocks led in the fourth quarter, was laughed out of Gainesville in a 44-11 debacle. And now Florida State, a resurgent power that came in trashing opponents by upwards of four touchdowns per game, has been held to a season low on offense, by far, while giving the ball away five times and scrambling for a meaningless touchdown on the final play just get halfway to its average on the scoreboard.

There's a flip side to that, in the month-long offensive meltdown against Louisiana-Lafayette, Missouri and Georgia, where the failure to move the ball finally caught up with Florida when it was combined with six turnovers. But even there, the difference in the game came down to a matter of inches in the final two minutes. Which is the only reason we're not talking about this team preparing to play for the SEC championship right now, with a bigger crown in sight.