1. Of course Gene Chizik got the whole thing backwards. A rebuilding job is supposed to start from the bottom up. If his first team at Auburn in 2009 had fallen on its face out of the gate, finished 0-8 in SEC play and endured one of the most lopsided beatings in Iron Bowl history to close the year, Tiger fans would have been pissed, but they would have also been patient enough to let the new guy see the project through. If he'd produced exactly the same record over four years, but delivered a national championship after the rock-bottom catastrophe, he would have been hailed, beloved and entrenched in the burgeoning juggernaut he built. In virtually any other order, his first four years at Auburn would have guaranteed a fifth.

Instead, Chizik is officially out today on the heels of a 3-9 debacle and a fittingly disgraceful rout at the hands of Auburn's most bitter rival in his final game. The historic BCS triumph of 2010 is no match for the bleak trajectory two years later: From rock bottom, the Tigers have no immediate prospects for climbing back to the top, and nothing to contemplate but how far they've dropped.

2. Of course the infamous heckler(s) who met Jay Jacobs at the airport in December 2008 to protest Chizik's hiring were dead wrong. He was forced to eat his words. And he probably did so gladly: Lay out a future for the same guy in December 2008 that includes an undefeated season, a national championship, a Heisman Trophy winner, two winning seasons, three bowl wins and one losing season over the next four years, and he'll take that deal. Just about any Auburn fan would have, or any fan of any school. Hell, I have no idea if Auburn actually paid for Cam Newton's services or not – the NCAA never found any conclusive evidence that it did – but give most fans the option of doing so and getting away with it, and they'd probably take that, too. It's a free country, and one that loves a winner. 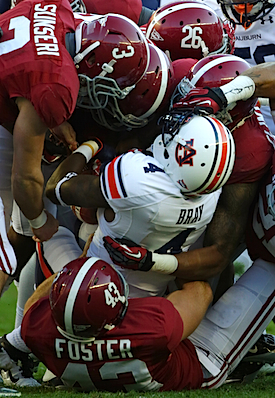 Chizik probably deserves more credit for assembling the biggest winner in school history in 2010 than he's received since. By whatever means, he did successfully recruit the single brightest, most valuable supernova of a player in generations. He also recruited the best defensive player in college football that season, and the five-star running back who broke Bo Jackson's freshman rushing record and was voted MVP of the championship win over Oregon. Chizik's first major move as head coach was hiring the unorthodox play-caller, Gus Malzahn, whose system produced more yards and points per game in 2010 than any other offense in the SEC, and overcame the most generous defense ever to win a BCS title, by far. If Chizik's greatest strength was surrounding himself with other, more competent people, on that front – at least initially – he was legitimately great.

3. Of course the heckler(s) and the legion of likeminded Chizik skeptics were right, too, that a man whose only head coaching experience had resulted in a dismal, 5-19 run at Iowa State – a program that had produced winning records before his arrival, and has resumed producing winning records since his departure – was not the man to build a stable, long-term success in a state already under the jurisdiction of Nick Saban's emerging Death Star at Alabama. Auburn had just fired Tommy Tuberville, whose teams had beaten Bama five years in a row before Saban's arrival, and again in Saban's first year in 2007, and replaced him with a guy who used to call Tuberville "sir" as his defensive coordinator. Chizik was a good defensive coordinator. As a head coach he was Ron Zook or Mike Shula, if Zook or Shula ever had Cam Newton for a year.

His teams were also prone to heavy attrition, eventually including Malzahn and his less celebrated counterpart on defense, Ted Roof, on the heels of a dysfunctional finish in 2009. Which left Chizik, in year four, presiding over a team that is both wholly of his own making and much further behind the pack in the SEC than the program he inherited in December 2008. The transitions on the coaching staff and at quarterback only hastened the spiral: If the 2012 Tigers were the worst edition in 60 years – and my god, were they ever – to a large extent they were only an extension of the team that was blown out in 2011 by 24 points at Arkansas, 35 points at LSU, 38 points at Georgia and 28 points in the Iron Bowl, where Auburn failed to score an offensive touchdown. Fast-forward a year, and essentially the same team was blown out by 18 points at Mississippi State, 17 points against Auburn, 21 points at Ole Miss, 42 points against Texas A&M, 38 points against Georgia and 49 points in Saturday's finale at Alabama, where Auburn failed to score a touchdown of any stripe. Chizik goes out on ten consecutive conference losses, overseeing an operation that never settled on a replacement for Newton and ultimately ranked last or next-to-last in the SEC this year in passing offense, total offense, scoring offense, rushing defense, total defense and turnover margin. 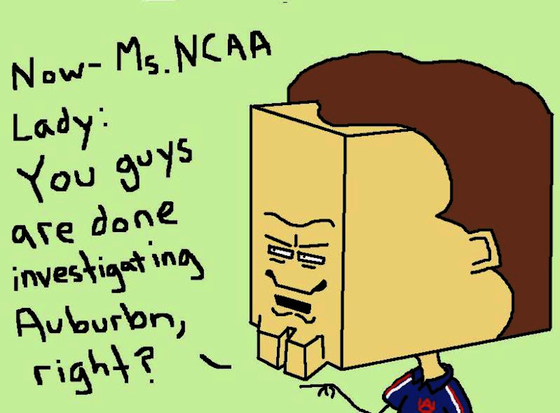 4. Thus marks what must be the fastest fall from the top of the mountain in college football history. Earlier this year, with Chizik in mind, a couple of CBS bros and I were discussing the obscure but rapidly growing fraternity of head coaches who were fired from their respective schools after winning a national championship there. Prior to 2006, it had exactly one living member: Barry Switzer, who was less than four years removed from his last title at Oklahoma when he was forced out in 1989 in the wake of NCAA sanctions and a high profile crime wave by Sooner players. In the last five years, he's been joined by Larry Coker, Phillip Fulmer, Bobby Bowden, Jim Tressel and Joe Paterno, all of whom (except Coker) were either a) At least a decade removed from their last championship, or b) Deposed for scandals that had nothing to do with win-loss records or the product on the field. (Paterno falls under both categories.) In Coker's case, he was never given much credit for assembling the fearsome Miami juggernaut he led to the 2001 title in his first year as head coach, anyway, considering it would have taken a staggering display of incompetence to somehow not win a championship with a team featuring 13 future first-round draft picks who had originally signed on to play for Coker's predecessor, Butch Davis.

Ultimately, Chizik fell to the same assumption: That his success was the product of one or two great players and the right pieces falling into place as opposed to anything structural or systematic, and would never be repeated. At some point, as the losses mount, that becomes a self-fulfilling prophecy that takes hold even in the locker room, among players with long enough memories to know what a winner looks like. and feel all the more demoralized by the decline. The seeds of his demise were planted during his greatest success.

5. Chizik's fate was sealed long before Saturday's 49-0 death march in Tuscaloosa, and almost certainly before last week's revelation into an ongoing NCAA investigation into potential recruiting violations, which is only interesting in this context to the extent that it can get the school off the hook for paying Chizik's full buyout. Going forward, the investigation may be a red flag for candidates who don't want to walk unwittingly into an Al Golden situation where they're blindsided by suspensions or sanctions two weeks before their first game. One guy who definitely would be up to the challenge… 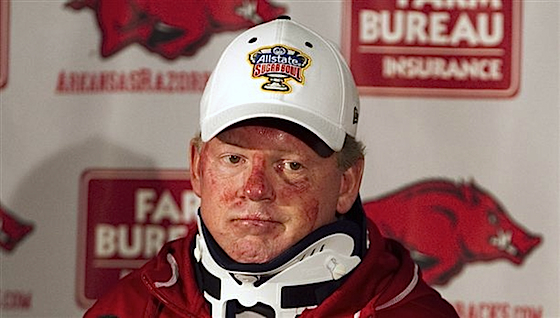 Come on Auburn. Y'all have a history together. You'd know exactly what you're getting. You're perfect for one another.