Ohio State 26, Michigan 21: The best they're allowed to be

The Buckeyes' 2012 season will go down as an opportunity missed, and one of the greatest in Ohio State history

Share All sharing options for: Ohio State 26, Michigan 21: The best they're allowed to be

You're not having a flashback: That is indeed the University of Akron's Jim Tressel, back in Ohio Stadium for the first time since his excommunication from the school to celebrate the ten-year anniversary of the Buckeyes' 2002 national championship team. He was greeted as warmly by the home crowd as he was by his former players, which is… well, ironic is probably putting it conservatively, even if the moment itself managed to transcend the inherent awkwardness. At the same time he was being toasted for past glories, the 2012 edition was delivering one final reminder of the present glory that was sacrificed to Tressel's self-serving silence both before and during Tattoogate. At the same time they were celebrating the decade of championships he gave them, at least some portion of the crowd – not a majority, but certainly some – had to be acutely aware in that moment of the one he may well have cost them.

2. The nod to the last group of unconquered Buckeyes offered another kind of nostalgia. As in 2002, the 2012 edition began the season on the fringes of the national consciousness, and was generally met with as much skepticism re: its place among the national elite as laurel leaves. As in 2002, the perfect record survived the fires of a late, improbable comeback against Purdue, a razor-thin escape against a mediocre edition of Wisconsin, a near-miss against a conference bottom-dweller and a too-close-for-comfort call against a heavy non-conference underdog. This was a young, flawed team, besieged by injuries on defense, which did not defeat an elite opponent and just won its sixth game of the year by a touchdown or less. 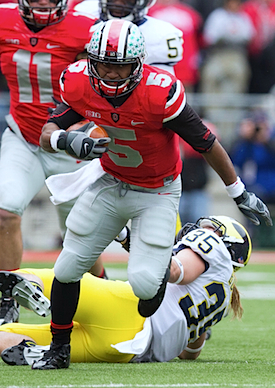 But even though the 2012 season will go down as an opportunity missed where championships are concerned, I strongly disagree with the sentiment that it "leads nowhere," as if championships are the only possible end. For this team, as in 2002, the triumph of surviving the gauntlet without a loss instantly replaces three months of doubt with a lifetime of goodwill as one of a very, very small handful of the greatest teams in Ohio State history. That club that excludes a lot of blue-chip outfits that might have been more impressive on the hoof and in box scores, but not in the final records. That might not be good enough to carve out a share of a national championship atop the Associated Press poll – given the schedule, I can pretty much guarantee it won't be – and quite a few BCS gurus seem fairly certain the Buckeyes would be on the bubble to play for a national championship even if they were eligible. But with that zero in the loss column and the Gold Pants on their mantles, they will never need a poll or a trophy to validate their place.

3. After watching Braxton Miller in this game in 2011, it was impossible not to marvel at how far he had come in a few months from the overwhelmed freshman who couldn't hit Lake Eerie with a pass at the start of the season. At that point, I wrote that Miller was miles ahead of his most obvious doppelganger, Troy Smith, at the same point in Smith's career, and probably ahead of Urban Meyer's championship quarterbacks at both Utah (Alex Smith) and Florida (Tim wotsiz-name). I'm not sure you can still say the same about Miller's progress re: Tebow's – the Tebow Child won the Heisman Trophy as a sophomore with nearly 4,200 yards of total offense and 55 touchdowns, which makes Miller's pace look almost pedestrian – but in terms of his trajectory in Meyer's offense, it's fair to say Miller is well ahead of schedule. His passing line today (14-of-18 for 189 yards, 1 TD, 0 INTs) was his best of the season in terms of completion percentage, and just off his best for yards per pass (10.5) and efficiency (184.3), against a secondary that came into the game leading the Big Ten against the pass. The Buckeyes are also virtually certain to finish with the highest scoring offense in the league.

That's not quite Heisman material just yet, even it is enough to get Miller within juking distance of the trophy in a couple of weeks. But if he came into the weekend as the best quarterback in the B1G, he comes out on a very short list of the best in the country, and I'm not sure we've even gotten a glimpse of the season. 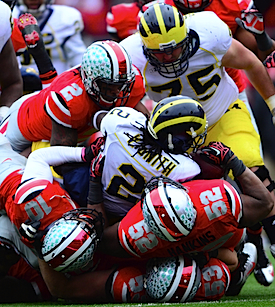 4. So Braxton Miller is the truth, which we knew. That said: After a rough first half, this game really belonged to the defense, beginning with the 4th-and-3 stop at midfield on Michigan's first possession of the second half. (An admirable decision by Michigan, but a brutal call, sending Denard Robinson directly into the teeth of a defense honed in him.) From there, the Wolverines' final five possessions of the game resulted in two punts, two fumbles, one interception and zero trips into Ohio State territory. Michigan's only first down on those drives came courtesy of a late pass interference penalty, immediately followed by the pick.

For the game, more than half of the Wolverines' total yards came on two scoring plays – a 75-yard strike from Devin Gardner to Roy Roundtree in the first quarter and a 67-yard sprint by Robinson in the second – and the Buckeyes finished with a nearly 14-minute advantage in time of possession.

5. With that, Ohio State is 12-0, and will finish 12-0. And with Miller qualifying as a seasoned vet next year, they're also significantly more likely to begin 2013 at the top of the mainstream polls than they are to end 2012 there. At any rate, they're virtually guaranteed a spot in the top five: Fourteen of 22 starters in today's game are scheduled to be back, including Miller, top tailback Carlos Hyde, leading receivers Corey Brown and Devin Smith and the top five tacklers on defense. That number does not include the blue-chip defensive line class that highlighted Meyer's first recruiting class, and spent its first season on campus in substantial backup roles. There's more previous starting experience off the bench, too.

In Meyer's second year at Utah, the Utes went 11-0, won the Mountain West going away and blew out Pittsburgh in the Fiesta Bowl. In his second season at Florida, the Gators won the SEC title and blew out Ohio State in the BCS Championship Game. In his second season at Ohio State, he's going to have a third-year starter tailor-made for his system, against a schedule at least as favorable as the one the Buckeyes just completed.