Game Day Keys: USC goes back to the Woods, and Saturday's other essential players

Share All sharing options for: Game Day Keys: USC goes back to the Woods, and Saturday's other essential players

•ROBERT WOODS, WR, USC
Not that anyone with 66 catches and ten touchdowns to his name exactly qualifies as a "forgotten man" in any offense, especially one that also includes the blooming supernova that is Marqise Lee at the same position. But if USC is the most disappointing preseason frontrunner in more than 40 years, Woods has been the single most disappointing player: Aside from his 132-yard, four-touchdown afternoon against Colorado (whose secondary has served as the equivalent of a nuclear test site for West Coast offenses, anyway) the same blistering target who incinerated Pac-12 defenses as a sophomore only scored twice in USC's other eight conference games, and didn't crack 100 yards in any of them. Freshman bravado notwithstanding, if quarterback Max Wittek is lost at sea in his first career start, against the No. 1 scoring defense in the nation, Lee is his beacon. Woods, maybe an occasional lifeline.

If Wittek has his feet under him a little bit, though, USC desperately needs Woods to emerge as the reliable weapon the Trojans remember from 2011. Although the Notre Dame secondary looked like an obvious liability at the start of the season, and has only gotten thinner as the year has worn on, the Irish have effectively stifled every opposing passing attack they've faced and allowed fewer big plays through the air than any other defense in the nation. Lee's presence alone makes USC's attack the best they've faced. If Woods is on, and Wittek is given enough time in the pockier to look competent, all of those superlatives could go up in smoke in a hurry, and take the Iish's long-awaited :ticket to the promised land with them. 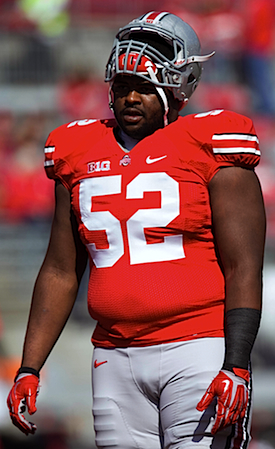 Michigan's revitalized offense presents enough problems for Ohio State, particularly in light of last year's game in Ann Arbor, where the Wolverines went for 277 yards on the ground and Denard Robinson turned in the best game of his career as a passer to cast off the chains of a seven-year losing streak. As of late Friday night, the alarms got a little louder with rumors that senior captain John Simon could sit out with an undisclosed injury. But with or without their All-Big Ten anchor on the end of the line, the Buckeyes will rely heavily on their All-Big Ten anchor in the middle to be the disruptive force his soaring draft stock suggests he can be. Michigan is not the same team it was in September, but the last time the Wolverines lined up across from a future first-rounder on defense, they helped turn him into a Heisman contender.

•TONY JEFFERSON, S, Oklahoma
Last week, the Sooners' leading tackler was at ground zero of the 572-yard bomb that went off in the middle of the OU defense, serving as the most frequently posterized player during Tavon Austin's record-breaking romp in West Virginia. Oklahoma staggered it out of Morgantown alive – that is, with Big 12 and BCS goals intact – thanks to the heroics of the offense, but badly exposed: Oklahoma State has not acquired Tavon Austin technology, but it does run essentially the same fast-break spread as the Mountaineers (Dana Holgorsen was hired at West Virginia specifically to recreate his prolific success as OSU's offensive coordinator) and they do have a consistently productive dual-threat option in the backfield, Joseph Randle, who happens to rank just behind Austin on the Big 12 charts for total yards from scrimmage. Rebounding begins with vastly improved open-field tackling, and that begins with OU's most active, consistent presence around the ball.

•ANDRE ELLINGTON, RB, Clemson
Ellington began his senior season with a bang, ripping off 228 yards on 9.1 per carry in Clemson's opening night win over Auburn, and promptly settled into a much quieter niche in an offense that's made most of its noise in the passing game. Last week's 124-yard effort against N.C. State was Ellington's first 100-yard game on the ground since September. Assuming the Tigers remember the futility of the running game in last year's 34-13 debacle against South Carolina, which left quarterback Tajh Boyd to be a sitting duck against the Gamecock pass rush, they'll make every effort tonight to ensure that it wasn't his last.

•SHAYNE SKOV, LB, Stanford
Skov was the Cardinal's best player in last week's 17-14 upset at Oregon, which is saying something on a defense that held the Ducks to fewer points than they'd scored in any game since their 2009 opener at Boise State, Chip Kelly's first as a head coach. At UCLA, the best defense in the Pac-12 gets another mobile, dual-threat quarterback, Brett Hundley, whose breakthrough afternoon against USC may have moved him ahead of Oregon's Marcus Mariota in the freshman pecking order on the West Coast. If Stanford has any chance of clinching the North Division with its own, significantly less hyped freshman QB, Kevin Hogan, it's up to Skov and Co. to make the Bruins one-dimensional early and spend the rest of the afternoon knocking Hundley down a peg.