Florida at Florida State: Shut up and play the hits

Share All sharing options for: Florida at Florida State: Shut up and play the hits

1. It's interesting how much context can alter perception. Last year's Gators/Noles match in Gainesville was a relentlessly ugly affair in which both offenses accounted for 18 punts, 12 three-and-outs, 6 sacks, 5 giveaways, 4 third-down conversions, 3 drives that crossed midfield (none of which ended in points) and one turnover on downs; the Seminoles won with less than 100 yards of total offense, and it was widely reviewed as two banged-up mediocrities tiptoeing through the most unwatchable game of the season like lost soldier making his way through a minefield.

This year, both teams are dramatically better and the stakes are dramatically higher, and anything remotely resembling a dramatic finish will be hailed as an instant classic. But the box score is going to look roughly the same: Both sides are ranked among the top six nationally in every major defensive category, and both offenses have had to endure a plague of injuries. Florida held the soon-to-be Heisman Trophy winner to his worst game of the season in terms of total offense, and his team to its worst game on the scoreboard; Florida State ranks No. 1 nationally in both rushing and total defense, and No. 1 in the ACC in everything. 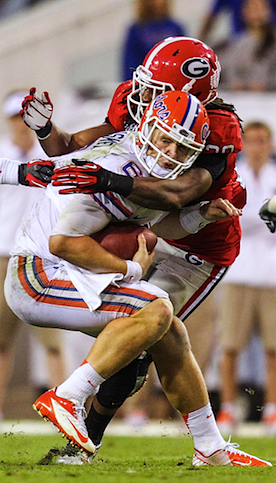 2. But I can't come up with any modern precedent for a team in Florida's position at this point in the season – a touchdown shy of a perfect season, within a game of a potential BCS title shot – with an offense quite as wretched as Florida's. The numbers are sobering enough: The Gators are languishing among the bottom 20 in passing offense, total offense and sacks allowed, and the bottom five in the SEC in scoring and pass efficiency. What's really sets off sirens is a) The ongoing impotence in too-close-for-comfort calls against Missouri and Louisiana-Lafayette, on the heels of brutal offensive efforts against LSU, South Carolina* and Georgia, and b) The ongoing, complete absence of notable playmakers.

Not that b) is any revelation after the last two years, in which the Gators were so bafflingly devoid of headliners on both sides that Urban Meyer was blamed for leaving the cupboard bare on the heels of two national championship and an annual parade of blue chips. The defense has finally put the lie to that myth (eight starters on the current D arrived as four or five-star prospects in the massively hyped hauls of 2009 and 2010), but where are those guys on the other side? The most likely candidate before the season, ex-blue-chip Andre Debose, has been relegated almost exclusively to the return game, even though the top two wideouts instead (Quinton Dunbar and Frankie Hammond Jr.) have combined for less than 600 yards between them. No offense in the league has generated fewer big plays through the air. The resident workhorse, Mike Gillislee, is a viable grinder, but also averaged just 4.2 yards per carry against SEC defenses. The starting quarterback, Jeff Driskel, and at least three starting lineman are playing through documented injuries. By all appearances, they're limping into the lion's den.

3. The asterisk next to the South Carolina game a couple grafs back is a reminder that the appearances can sometimes – not always, but sometimes – be deceiving. In that game, of course, Florida crushed the Gamecocks, 44-11, despite turning in its worst afternoon in terms of both total offense (183 yards) and yards per play (2.8) in at least 20 years. Although Florida didn't score on defense or special teams that day, they dominated so thoroughly in those phases that it amounted to the same thing: Out of six touchdown drives against Carolina, four began inside the Gamecocks' 30-yard line due to a giveaway, takeaway or return, and three of those began inside the ten. All six drives combined covered a grand total of 146 yards on 31 plays, and a dozen of those plays went for a gain of one yard or less. 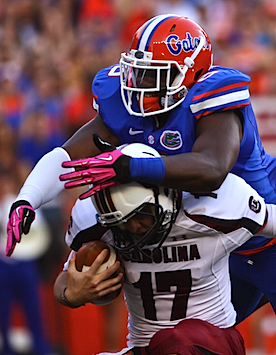 Forty-four points on four turnovers isn't exactly a replicable blueprint against Florida State, as evidenced by the fact that Florida hasn't replicated it. But the Gators have turned the worst turnover margin in the SEC in 2011 into the second-best in 2012, and finished in the black in nine games out of eleven. Besides South Carolina, turnovers were crucial in the wins over LSU, Missouri and UL-Lafayette, and even more so in Florida's only loss, against Georgia, which also happens to be the only game they finished in the red. This offense doesn't need to score 44 on Saturday, and with this defense, probably won't need even that. But it will need a couple of breaks if it's going to have any shot at all.

4. If you were only looking at the schedules, Florida State would be the side with some convincing to do, and that would be true to an extent: Although the human polls are sold on FSU's resurgence into the national elite, the six BCS computer polls – none of which are allowed to account for the Seminoles' huge margins of victory – continue to punish them severely for a slate that's included a single ranked victim (Clemson), not one but two games against FCS cupcakes (FSU has West Virginia to thank for that), and an inexplicable loss at N.C. State. As a result, the Noles are still relegated to 17th among the computers in the latest BCS standings, and badly need the validation of a win over Florida (a computer favorite, thanks to wins over heavy hitters LSU, South Carolina and Texas A&M) to have any chance of being in the championship mix if Notre Dame goes down at USC.

An ACC Championship win over middling Georgia Tech certainly isn't going to close any gaps, although a Clemson win over South Carolina might, a little. Even if human pollsters are impressed enough to move the Noles into the top two, though, objective, mathematical skepticism toward the ACC schedule is a bitch they cannot beat.

5. Five predictions…
• Florida holds Florida State out of the end zone in the first two quarters and takes a lead into the half.
• Jeff Driskel starts the game for Florida, but does not finish it.
• Florida will be outgained by at least 100 yards of total offense, but will close the gap with a significant edge in starting field position. (The Gators rank third nationally in net punting; Florida State ranks 101st.)
• With the game very much in doubt in the fourth quarter, the Seminole pass rush will force a turnover that sets up a very short, clinching touchdown.
• Florida State wins, 22 to 10. And still finds itself ranked behind the Gators in at least half of the BCS computer polls on Sunday.