Around the Scorn: A nation turns its lonely eyes to Max Wittek

Miami braces for the hammer, ESPN plants its flag on the playoff planet and the BCS picture hinges on USC's new starting quarterback, all in today's roundup. (Goo goo kachoo.)

Share All sharing options for: Around the Scorn: A nation turns its lonely eyes to Max Wittek

• WE HAVE WAYS OF MAKING YOU TALK. Happy Thanksgiving, Hurricanes!

"The purpose of this letter is to apprise you that the NCAA enforcement staff is requesting to schedule an interview with your clients regarding their knowledge of or involvement in possible NCAA violations concerning the University of Miami, Florida, football program.

"Interviewing your clients is important in order for the enforcement staff to conduct a thorough investigation, and both the staff and the institution request you and your clients’ cooperation in this matter. However, at this time, all attempts to schedule and execute interviews with [blank] have been unsuccessful. As a result, this letter serves as a formal and final request by the NCAA enforcement staff for interviews with [blank] to be completed by Nov. 23, 2012.

"If we do not hear back from you or your clients by that time, the staff will consider the non-response as your client’s admission of involvement in NCAA violations. You may contact me at [blank] in order to arrange this interview. Your assistance in this matter is appreciated."

That is the full text of a letter, obtained by the Miami Herald, in which the NCAA very politely informs certain former Canes that IT WILL BREAK THEM if they fail to comply with requests for information by this Friday. Hold your bitching about "guilty until proven innocent": In fact, people familiar with the NCAA process think this is a fairly clear sign not that investigators are grasping at straws, but rather that they likely already have all the ammunition they need. The letter is only the NCAA's way of covering its ass by having something in writing that proves to the Committee on Infractions that players who failed to refute the evidence presented there were given a fair opportunity to do so. And my god, there is more than enough documented evidence on the record. 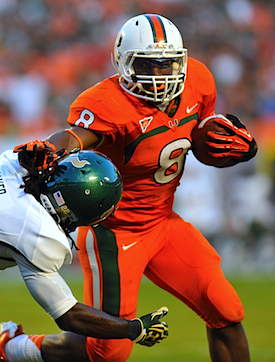 Along with the self-imposed bowl ban Miami administered to itself over the weekend – one that will cost the Canes a shot at the ACC championship, by the way, by ceding the Coastal Division crown to Georgia Tech – signs are mounting that we're on the verge of a formal Notice of Allegations dropping like the hammer of Thor in coming weeks.

• WHO IS MAX WITTEK? Like all USC quarterbacks, America's last, best hope for maximum Notre Dame schadenfreude this weekend is a towering, blue-chip slinger from just down the road – Mater Dai High, in fact, the same school that produced Matt Leinart and Matt Barkley – who will eventually command the same slobbering praise as his prototypical predecessors. Whether he's good enough yet to flash any of that potential Saturday against the No. 1 scoring defense in the nation, we don't have a clue: He's attempted a grand total of nine passes this season as a redshirt freshman, including the three he put up last week against UCLA after Barkley was knocked out with a separated shoulder on the Trojans' final, meaningless drive. At least Wittek sounding confident. For now.

For the record, no quarterback of any pedigree, style or experience has delivered anything that might be mistaken for a "good" performance against the Fighting Irish this season: Oklahoma's Landry Jones had 364 yards passing in October, but it took him 52 attempts to get there, and he didn't have a touchdown pass in a 30-13 loss; Purdue and BYU managed two touchdown passes apiece, but were both picked off twice, too. The closest thing to a standard bearer may be Tino Sunseri, who was 19-of-29 passing for 164 yards, a touchdown and no interceptions in the triple-overtime scare against Pitt. But Sunseri was also sacked five times and finished with one of his lowest-rated performances of the season.

• AND NOW, A WORD FROM DANA HOLGORSEN.

Thank you, coach. After a 5-0 start, West Virginia has lost five in a row.

• WE CLAIM THIS REVENUE STREAM IN THE NAME OF DISNEY CORP. As if there was any doubt on this, we have confirmation Wednesday that the first college football playoff will be brought to you by ESPN through the year 2026:

Specifically, the arrangement would provide ESPN with rights to:

• Championship Games: Coverage of each year’s championship game pitting the semifinal winners against each other on the Monday at least seven days after the semifinals at sites to be determined by the commissioners.
• Semifinals: Coverage of two semifinals each year matching four seeded teams identified by a selection committee to be named by the commissioners. The semifinals will be rotated among six bowl games consisting of three "contract bowls" and three "host bowls" to be determined by the commissioners.
• Additional bowls in the playoff format: Coverage of all remaining games from the sites of the three "host bowls" during the years those bowls are not semifinal sites. Note: ESPN had previously secured the rights to the Rose, Sugar and Orange Bowl games for the same 12-year period (through January 2026).
• Related programming: Exclusive rights to branded content throughout each season, including the official team-selection announcement.

Presumably dollar figures on this deal will follow in short order, if they're not floating around by the time this is posted. (Sorry, shit goes down fast, y'all.) Initial reports suggested ESPN was offering somewhere in the neighborhood of $500 million per year, or $6 billion over the length of the contract – a ton of money even by the standards of craven corporate overlords playing with huge sums like they're Monopoly money. By 2026 that's probably going to look like chump change.

After we learn how much ESPN ponied up to put its logo on this, next on the playoff checklist is 1. Revenue distribution among the major conferences, and 2. Site rotations for the championship game and semifinals. 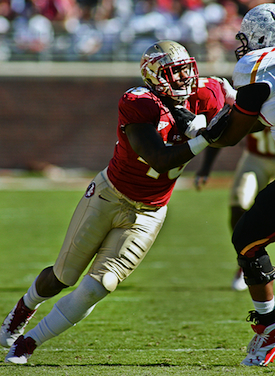 • WE HARDLY KNEW YE. The annual winter exodus to the NFL has been initiated by Florida state defensive end Brandon Jenkins, who plans to forego a fifth year at FSU despite missing essentially his entire senior season with a foot injury suffered in the season opener. Prior to that, he was a two-time All-ACC pick who came into the year with the full All-American/first-round treatment, and will still probably go in the second or third round, likely as an outside linebacker. That may improve with an above-the-fold combine performance that eases lingering doubts about his recovery.

The really terrifying part: Florida State lost arguably its best player and still leads the nation in both rushing and total defense with two other legitimate All-America candidates/soon-to-be draft picks, Bjoern Werner and Tank Carradine, at the same position. Jenkins may actually find it easier to top the depth chart at the next level.

QUICKLY…
• The winningest coach in NCAA history is stepping down after 60 years.
• Minnesota's leading receiver explains why Jerry Kill forced him to quit the team with two games to go in the season.
• Jerry Kill explains why that kid is full of shit.
• As independents, BYU and Army might get a pittance from the new playoff format, but that's it.
• New realignment rumors mean it's time to fire up the meme machine re: Virginia Tech and the SEC.
• UTEP's leading receiver was arrested for something really stupid.
• Matt Barkley doesn't regret his decision to return to USC.
• And after Oklahoma's defensive collapse at West Virginia, Mike Stoops is just glad he's got a butt left.