Hail to the Eyeballs

In the long run, craven, market-oriented reorganization of the sport is not an affront to "tradition." It is tradition.

Share All sharing options for: Hail to the Eyeballs

1. There is nothing, literally nothing on earth I'd less like to be writing about on Nov. 20, 2012, than conference realignment. On the field, the season is at full throttle, hurtling through November like a blur, on a track whose destination seems to change by the week. This month has been the best college football has to offer: On successive Saturdays, we've seen the No. 1 team in the nation rally for a game-winning, season-saving touchdown in the final minute of its biggest game of the year, only to be abruptly toppled from the throne seven days later, only to find itself back in position to reclaim the crown when its successor at the top was ambushed by a double-digit underdog. Undefeated seasons at Notre Dame and Ohio State have been saved in overtime, where Oregon's perfect record went to die. Marqise Lee and Tavon Austin have singlehandedly burned record-breaking trails through opposing defenses, and still haven't been able to save their teams from collapse. A freshman is on the verge of wrapping up the Heisman Trophy. UCLA just overthrew USC's decade-long stranglehold on the title of "Los Angeles' Team." Coaches are biting the dust. We're a few days away from Alabama/Auburn, Clemson/South Carolina, Florida/Florida State, Michigan/Ohio State, Oklahoma/Oklahoma State, Oregon/Oregon State and USC/Notre Dame, all of them carrying major BCS implications.

As an unpredictable, dramatic season reaches a crescendo, which two schools have driven the national conversation over the past 72 hours? Yeah, Maryland and Rutgers. 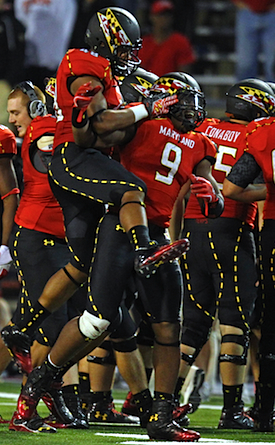 Now that it's official, of course – Maryland and Rutgers have both been approved to join the Big Ten at an as-yet determined date in the near future, notwithstanding the token financial and legal wrangling to extricate themselves from their longtime homes in the ACC and Big East, respectively – some taking of stock and gnashing of teeth is obligatory. Much as I'd prefer to relegate it to an offseason pastime that fills some of the gaping expanse between February and August, conference expansion and realignment is a big, sweeping, ground-shifting deal that emits tremors spanning decades, long after the fleeting thrills of a couple weekends' worth of games have been forgotten. And bored and exhausted as I am by the subject, I have never been among the faction that views a craven, market-oriented reorganization of the sport as an affront to "tradition," or whatever. In the long run, I think a craven, market-oriented reorganization of the sport is tradition. There's just far more at stake now than in the past, and the guys at the top of the chain are getting a lot better at it.

That is, they're getting better by their own definitions, for their own ends, which have evolved so dramatically over the last five years in response to explosive television revenues that anyone still thinking in terms of "tradition," "quality" and "geography" is left looking like a caveman hurling rocks at the moon. Big-time conferences in 2012 are in the content distribution business. Competitive balance and academics and all that is a lot of bullshit:

"I did it to guarantee the long-term future of Maryland athletics," university President Wallace Loh told The Diamondback of the decision to move. "No future president will have to worry about cutting teams or that Maryland athletics will be at risk."

"[The Big Ten] is going national because of a phenomenon," he said. "Attendance among college-aged students is dropping. The reason is because this generation is completely wired, and they are getting their education and entertainment on tablets and mobile devices. Everyone thinks you make your money in seats. You make it on eyeballs on a screen."

Does it matter that in nearly a century of football Maryland has played exactly eight games against Big Ten opponents? Or that it will be forsaking generations-old rivalries with like-minded East Coast neighbors Clemson, North Carolina and Virginia to join a conference with flat-landers from Iowa, Nebraska and Wisconsin, against whom the Terrapins have never set foot on the field a single time? Of course not. Does anyone care that Rutgers has never won jack in football, that the historical profile of the program makes more sense in the Patriot League, or that it has only been marginally competitive at the FBS level – at an unsustainable cost – for less than a decade? Don't be ridiculous. 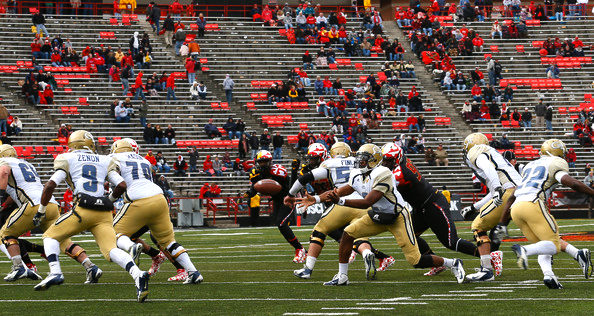 Is anyone worried about the fact that games in Byrd Stadium routinely take place in front of tens of thousands of empty seats? See above. Did anyone in the Big Ten office sit down and calculate the effects of increased travel times, or how expanding membership to 14 teams would affect the frequency of century-old rivalry games like, say, Michigan-Minnesota for the Little Brown Jug? Do you really have to ask?

It doesn't really even matter than hardly anyone in New York City or Washington, D.C., cares all that much about Rutgers or Maryland or college sports, in general. What matters is that there are more unexploited eyeballs in those markets than anywhere else, and adding Rutgers and Maryland as bargaining chips increases the odds that networks and cable companies will pay higher rates for content that might attract them. That is the one and only factor that matters. Cancel your subscription or get used to it.

3. While most disgruntled cave dwellers have resorted to throwing tradition rocks in reaction to change, the only person who has gone out of his way to refute the soundness of the move on the relevant terms, as a business decision in pursuit of eyeballs, in noted stat head Nate Silver in the New York Times:

The sacrifice [of increased travel] might be worth making for games against Notre Dame, Texas or perhaps even Missouri. But the Eastern schools seem to reduce both the geographical integrity of the conference and the quality of the average Big Ten football game.

It is probably no coincidence that the two most popular college football conferences – the Southeastern and the Big Ten – have until now been the most conservative about expansion. The most recent additions to the Big Ten, Penn State and the University of Nebraska, ranked as the 3rd and 18th most popular football programs in the country. The newest additions to the Southeastern Conference, Texas A&M and Missouri, were ranked 6th and 23rd.

Rutgers and Maryland are outstanding public universities – but they are just not in the same league in terms of football.

The Big Ten may have expanded the size of its revenue pie, but it will be dividing it 14 ways rather than 12, and among family members that have less history of sitting down at the table with one another. In seeking to expand its footprint eastward, the conference may have taken a step in the wrong direction.

For this move to pay off (literally), media execs not only have to agree to pony up more money for a watered-down product: The added value has to be enough to justify the additional mouths at the table (and their buyouts). Presumably this kind of move doesn't happen unless that's a virtual guarantee – Jim Delany has probably been nailing Comcast bros down on the specifics for months in between pounding shots – but if not the internal dissent that may follow will not be pretty.

4. Two potential positives of expanded membership: a) Delany has already suggested that the B1G will revisit adding a ninth conference game to the annual schedule, which will help mitigate both competitive imbalances and extended breaks in traditional rivalries, and b) They may (finally) reconsider the putrid "Legends and Leaders" thing in favor of something that makes more geographic sense, or at least that fans do not completely despise. But there goes the caveman brain again, assuming the fans' opinions are remotely relevant to anything as long as they can be counted on to tune in to the games.

5. The next dominoes to fall will do so from the Big East, whose remaining members are even more desperate to abandon ship now that the conference has been relegated to the children's table in the new playoff format beginning in 2014. Pittsburgh and Syracuse are already scheduled to make the leap to the ACC next year; UConn could be close behind to fill the void left by Maryland. Then there's Louisville, whose president, James Ramsey, made sure he was on the record this morning blowing a fat kiss to the ACC:

Ramsey said this afternoon before departing with the U of L basketball team for the Bahamas that U of L has had no direct contact with the ACC office itself. Still, a U of L source told WDRB this morning that both Ramsey and U of L athletic director Tom Jurich have had informal discussions with parties inside the conference. Ramsey wouldn't elaborate on any indirect discussions, but did not shy away from discussing the ACC openly.

"It would be a great conference for us, if we ever had that opportunity," Ramsey said. "It has great academic schools, great tradition and history going back to 1953. It's changing, has picked up, of course, some schools that were an integral part of the Big East. It's a wonderful conference."
[…]
As far as U of L's position within the Big East, Ramsey said the school is committed to working with the league to move forward.

As for U of L's chances to move to another league, Ramsey said he said "there's a lot of interest" in U of L from various conferences. And he said that he expects that change is far from over.

Yes, it is: With the Big Ten and SEC both at 14 schools, the Pac-12 and especially the sleek Big 12 – another possible destination for Louisville – may feel compelled to keep up with the Joneses. There is an assumption among power brokers that the Pac-12 is always keen to follow its "big brother," the Big Ten, which could put the apocalyptic bid for Texas and/or Oklahoma that very nearly gutted the Big 12 in 2010 and again in 2011 back on the table. The end game in that scenario, as it has been from the beginning, is four 16-team "super conferences" that look more like the AFC and the NFC than a traditional college conference consisting of teams within reasonable driving distance reliably playing one another every year.

But don't worry! You'll get used to it. As long as the games go on, we always do.