Top 25: How do you solve a problem like the Buckeyes?

This week's rankings take a closer look at Ohio State's place in the pecking order, and marvels at the unprecedented parity of it all. 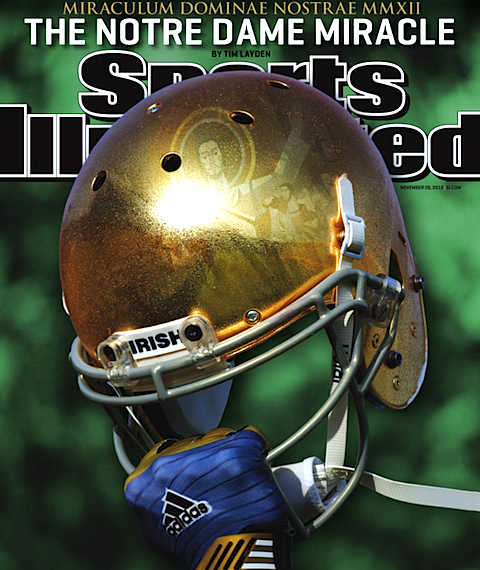 A few of you thought I was a little hard on Notre Dame last week in my justification for relegating the Irish to No. 3 behind fellow unbeatens Kansas State and Oregon, which wasn't really the point – I did call ND a "good, worthy team" – but does look a little… pessimistic in the wake of the Wildcats and Ducks' losses as double-digit favorites. Obviously, next year's resumé grid (see below) will be updated to include a column for "Chosen by God?"

• I DON'T KNOW WHAT TO DO WITH OHIO STATE. It's debatable whether the Buckeyes have been hurt more by NCAA sanctions or the deathly reputation of the Big Ten, but if not for the former, I seriously doubt the latter would be enough to keep them from No. 2 in the actual BCS standings after Saturday's overtime win at Wisconsin. With that, Ohio State has wins over both teams bound for the B1G Championship Game (Wisconsin and Nebraska), road wins over Michigan State and Penn State and a chance to close it out this weekend against surging Michigan; in a normal year, I think the name-brand value of that resumé alone would be enough to get an unbeaten OSU outfit over the two one-loss SEC teams currently sitting in front of it in the AP poll, and aside from the Paul Finebaum Show I doubt anyone would think twice about it.

But I also wonder if the sanctions haven't made it easier for voters to judge the Buckeyes' schedule more accurately, by removing the automatic benefit of the doubt that usually accompanies a recognizable power on a winning streak. In Ohio State's case, there was some initial doubt seeded by relatively close calls against Cal and UAB outside of the conference, and then legitimately harrowing escapes against Indiana and Purdue within it, but what really stands out compared to other contenders is the absence of an above-the-fold victim. Among the top 13 teams this week, the only others that haven't beaten one of other dozen are Oregon and Oklahoma – and the Ducks and Sooners have both played significantly tougher schedules than Ohio State according to the computers.

The obvious comparison for any team in Ohio State's situation is Auburn in 1993, when the Tigers – also facing a postseason ban that kept them out of the SEC Championship Game and a bowl – ran the table under first-year coach Terry Bowden. That team ultimately had to settle for fourth place in the final polls, even though it also knocked off both of the teams bound for the SEC Championship (Alabama and Florida) and there were no other undefeated teams after Nebraska, Texas A&M and West Virginia all lost their bowl games. There is some inevitable buzz this week about the Buckeyes' chances of claiming the AP crown if Notre Dame loses, leaving OSU as the only undefeated team in the country, but barring an eye-opening massacre against the Wolverines, there doesn't seem to be nearly enough juice for that.

• AS YOU LIKE IT. Between the Buckeyes and Notre Dame, I went with three one-loss outfits defined by entirely different virtues: Oregon has been the most dominant in terms of margin of victory, Florida has the best collection of big wins, and Alabama is the best combination of both. There is a very small but clear difference in my mind between those three and the other one-loss contenders just below them, Georgia and Kansas State, which boast one victory apiece over a top-15 opponent and were blown out in their only losses. But the truth is, spots two through probably nine could have been thrown together in just about any order, and it would make just as much sense.

• DEEP IMPACT. It says something about the depth of the field this season that the teams ranked 16th, 17th and 18th here – UCLA, Nebraska and Texas – all have legitimate BCS hopes on the heels of month-long winning streaks, but haven't been able to make up any ground on the top ten in the past few weeks because no one immediately in front of them is losing, either. If you put the top 16 teams right now head-to-head in a four-round, single-elimination playoff, I have no idea what would happen; anyone in that group can beat anyone else, as they've spent much of the year demonstrating. But it would be an instant smash. 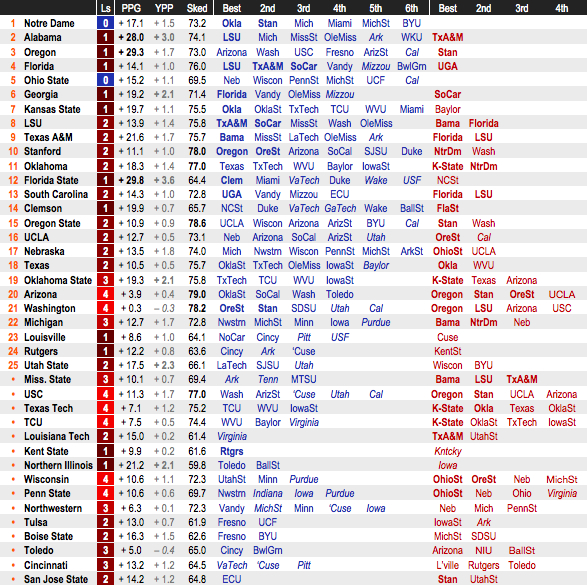