After two months in cruise control, the start of a November run featuring USC, Stanford and Oregon State is the moment when Oregon kicks into a new gear, or begins to sputter

1. If there's anything good to say about USC's turnover-fueled, come-from-ahead loss last week at Arizona, it's the fact that at least Trojan partisans weren't taken entirely by surprise. Even the true believers had plenty of advance warning in the early stumble at Stanford, which did not technically move any larger goals beyond SC's reach, but did expose such obvious shortcomings on the line of scrimmage that the Pac-12 title suddenly seemed like a very remote possibility, much less the national crown forecast by the preseason polls. (Not to mention their own head coach.) The sloppy, somnambulant wins over Cal, Utah and Washington did nothing to change that trajectory, and the second-half swoon in Tucson only confirmed it. At no point has USC looked like the flame-throwing frontrunner we thought it would be when Matt Barkley decided to come back for his senior year, and last week only confirmed that it will not have the opportunity to evolve into one down the stretch. 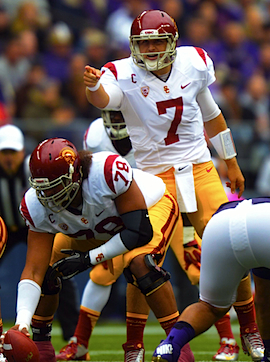 2. And yet: Amid the fatal giveaways on offense (five of them) and breakdowns on defense (588 yards' worth), last week was also the single most imposing exhibition this year of the firepower that put them on top in the first place – namely, sophomore wide receiver/undercover superhero Marqise Lee, who obliterated a Pac-12 record against Arizona with 345 yards on 21.6 yards per catch, personally accounting for 70 percent of Barkley's career-high 493 yards passing. (Lee also had 123 yards on kickoff returns, giving him more all-purpose yards in a single game, 478, than any I-A/FBS player since Reggie Bush wrapped up the Heisman with a 513-yard outburst against Fresno State back in 2005.) A week earlier, Barkley set new conference marks for completion percentage and pass efficiency in a blowout win over Colorado; in the same game, junior Robert Woods set USC records for touchdown catches in a game and receptions in a career.

Barkley has multiple touchdowns passes in six of USC's eight games and ranks 13th nationally in efficiency. Lee is a close second nationally in catches, yards and touchdowns. They have not always been consistent – Barkley offset his big day against Arizona with a pair of interceptions, of which he's already thrown more this year (8) than in 2011 (7) – but man-for-man, this is a legitimately explosive offense.

In that sense (and that sense alone), the Trojans still look very much like the up-and-coming outfit that ambushed Oregon last year in Autzen Stadium, where Barkley dropped a 323-yard, four-touchdown bomb that detonated the Ducks' three-year home winning streak and bounced them from the national championship picture in one fell swoop.

That wasn't Barkley's best game on paper, but it was his biggest win by a mile, and is more responsible for his emergence as the de facto "Face of College Football" coming into this season than any other night of his career, up to and including the fatted calf of a performance he delivered unto the Coliseum gods the following week against UCLA. That is what Matt Barkley and his receivers are capable of, and that is what makes USC the greatest threat to Oregon's perfect record, by far.

3. The biggest difference from that game to this one, in fact, is probably the Oregon defense, which gets very little credit compared to the warp-speed offense, but is still only a few weeks removed from shutting out the same Arizona offense that just hung 39 on the Trojans. Statistically, that edge is harder to prove over the course of the season than it is looking at the specific circumstances of individual games, in part because the Ducks usually find themselves ahead by so much, so quickly, that the final stats are almost always distorted by garbage-time noise. (Chip Kelly's favorite kind of noise.) But here are a couple of indications of how good they've been at keeping points off the board when it matters: 1. Oregon owns the nation's largest margin of victory, 34.0 points per game, despite consistently letting its foot off the gas in the second half, and 2. At some point, the Ducks have scored at least 28 consecutive points in every game except one, a 52-21 win over Washington in which they scored 21 consecutive points to open the game and led by as many as 38 points. 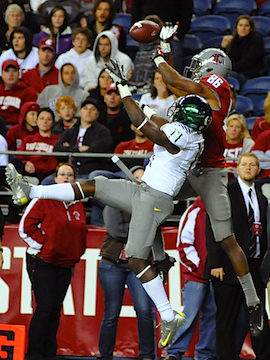 At its explosive best, USC is still just trying to keep pace with that. And where that explosiveness is concerned, there is also this: Oregon has only allowed three passing plays longer than 30 yards, second-fewest in the nation behind LSU.

4. There's a common sense, I think, that Oregon is a different, more vulnerable team away from Autzen, but the evidence for that is scant: The Ducks have won 13 straight in true road games (not including neutral sites), the longest active streak in the country, all but two of them coming by double digits. The last time they were in the L.A. Coliseum, in 2010, they shredded the Trojans for 53 point on 599 yards of total offense en route to an undefeated season and the BCS title game. After two months in cruise control, the start of a November run featuring USC, Stanford and Oregon State is the moment when the 2012 model finds the same gear, or begins to sputter.

5. Predictions…
• De'Anthony Thomas goes over 200 all-purpose yards against his hometown school for the second time in as many years.
• USC scores first and leads for most of a surprisingly low-scoring first half, before falling behind for good on a pair of quick Oregon touchdowns in the final five minutes of the second quarter.
• Matt Barkley goes over 300 yards passing, but only after putting the ball in the air at least 40 times and producing as many turnovers as touchdown passes.
• Lane Kiffin has a postage complaint about the officials, which he attempts to downplay after bringing it up.
• Oregon wins, 36-31.