Weekly notes from he undercard

Share All sharing options for: Mid-Major Monday: Price at closing

Mike Price took Washington State to the Rose Bowl, became an SEC legend without coaching a game at Alabama and spent much of the last decade incorporating a pickaxe into his public persona. Monday, two days after his 359th game as a college head coach, he confirmed that Saturday's visit from Rice will be his last. He is keeping the pickaxe.

Price's name will never outrun the "It's Rolling, Baby!" stripper scandal that cost him drove him from the pinnacle of his career almost as soon as he'd arrived, but there's a reason he landed in Alabama in the first place: Not only had he lasted 14 years at Washington State, and turned in a winning record there over the course of his tenure, but somehow he'd managed to guide the Cougars to two Rose Bowls and three top-10 finishes. His quarterbacks in Pullman – Bledsoe, Leaf, Gesser – were consistently among the best in the country, and he won twice as many games there as any other coach since World War II. He's won more than any other coach in El Paso, too, albeit by slimmer margin, despite enduring seven losing seasons in a row on the heels of some initial success.

That says more about the circumstances UTEP than it does about Price, who has never had the resources to win big and immediately blew the one opportunity when he did. He'll never know if he could have made Alabama into anything resembling the perennially contending Death Star the Crimson Tide have become under Nick Saban. (Even if he hadn't, at least they'd have been more fun to watch.) But he persevered, kept winning games, obviously kept some sense of humor, and finished off a fine career. Just a fine career. 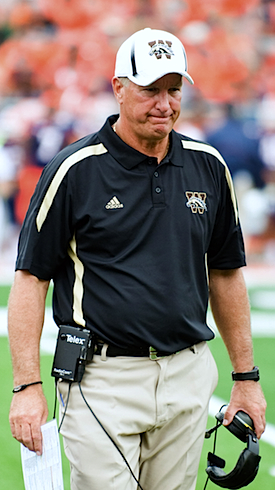 • HAPPY TRAILS, OR WHATEVER. In less voluntary coaching news: Western Michigan pulled the plug Saturday on the eight-year administration of coach Bill Cubit, making the news official just a hours after the Broncos ended a 4-8 campaign by losing to Eastern Michigan, 29-23. That was a new low in an up-and-down tenure that wasn't all bad: In his first seven seasons, Cubit took the Broncos to three bowl games and managed to come in eight games over .500, a solid number for a program that had endured four consecutive losing seasons prior to his arrival. Alas: Western Michigan hasn't played in the MAC Championship Game in more than a decade, and home attendance was beginning to dip regularly below 15,000.

• NOT A PAID ACTOR. On the slightly more optimistic end of the league – but only slightly, because every MAC man knows the bitter bite of irrelevance and despair lurk around every corner – the MAC Championship Game is set in stone between the defending champ from the East, Northern Ilinois, and the West champ, Kent State, which has never played in the title game and hasn't won a conference championship in 40 years. Both teams are 10-1, both are on crazy winning streaks since early September losses – the Huskies have taken ten in a row, the Golden Flashes nine – and both feature legitimate stars in NIU quarterback Jordan Lynch and Kent tailback/receiver/return man/ landscaper Dri Archer, who rank among the top five nationally in (respectively) total offense and all-purpose yards. This is not a commercial, but you should look up whatever channel the game is on next week and watch it. Especially if you're a Purdue fan, because the guy getting dunked with Gatorade at the end is probably your next head coach.

• LIVE AND LET TIE. There will be no such certainty in the Mountain West, which enters the final weekend of the season with a three-way logjam at the top between Boise State, Fresno State and San Diego State and no satisfying way to break it unless one or two of the three are upset Saturday by one of the league's lesser members. This is one of those cases where A) (Boise) beat B) (Fresno), which beat C) (SDSU), which beat A) (Boise), and there is no championship game on deck to manufacture a decisive ending. Barring some truly batshit development, it's just… well, it's just an old-fashioned three-way tie, is what it is. I guess everybody gets a trophy. <- - - - -Obama's America

The wildest scenario? Boise State and San Diego State go down at the hands of Nevada and Wyoming, Air Force knocks off Fresno to join the 6-2 Club and we're left with a four-way tie. In which case all four should be invited to play in the Las Vegas Bowl simultaneously, "Royal Rumble" style.

• INAPPROPRIATE FOR ALL AUDIENCES. Saturday's date between Conference USA frontrunners Tulsa and Central Florida was indistinguishable from a showdown between Alabama and LSU in that they're destined to play again for higher stakes: With a 23-21 win at home, Tulsa earned the right to host the C-USA Championship Game in two weeks as champion of the West, which will almost certainly feature a return date from UCF as the rep from the East. 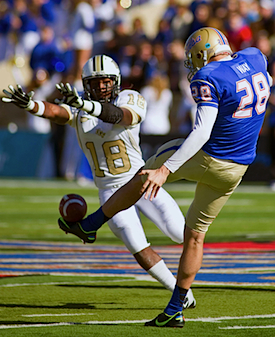 The only thing standing in the Golden Knights' way? A visit this weekend from sad sack UAB, which could conceivably open a door for East Carolina with one of its period November upsets. That's probably not going to happen – UCF opened up as a three-touchdown favorite – but just in case, George O'Leary has already requested fresh batteries for his taser. They're not forking over legal fees to drag out an NCAA appeals case just to limp into the Beef 'O' Brady's Bowl, goddammit.

• THE WORST OF ALL POSSIBLE SEASONS. ...continued Saturday for Southern Miss, which demonstrated the unique flair for kicking itself in the face that's made it the only winless outfit in the FBS. Like all truly terrible teams, the Eagles are at their soul-crushing worst immediately after flashing some small, probably random glimmer of hope; against UTEP on Saturday night, they offered two in a span of five minutes. First, trailing 27-20 with less than seven minutes to go in the fourth quarter, USM quarterback Arsenio Favor connected with Quentin Pierce on an 81-yard touchdown pass to tie the game… moments before allowing UTEP's Autrey Golden to restore the lead by taking the ensuing kickoff to the house. Undaunted, the Eagles responded with an 86-yard touchdown drive to pull within one point, 34-33… moments before the two-point conversion to go ahead was intercepted, sealing their eleventh consecutive defeat. If you ever wondered what could be worse than getting blown out by Rice or SMU, well, there you go.

Southern Miss has one more game in its parade of failure, at Memphis, at which point it will have to decide whether guiding the program from arguably the best season in school history in 2011 to unquestionably the worst in 2012 is enough get coach Ellis Johnson canned after one year on the job. Maybe if I donated more money to the alma mater, I'd feel more obliged to offer an opinion, which I do not. If I did, though, it certainly would not be swayed by a 1-11 finish as opposed to 0-12.

vMID-MAJOR GAME OF THE WEEK: Utah State 48, Louisiana Tech 41 (Overtime).
The WAC still has a week to go before it folds up the tent and rides into the sunset, but it may as well have called it quits on this one, an instant classic that channeled the eternal essence of the WAC through 1,275 yards of total offense, a 24-point fourth quarter comeback and a dramatic field goal on the final play of regulation – all with the conference championship on the line.

Utah State scored a touchdown on its first play from scrimmage, an 86-yard pass from Chuckie Keeton to Kerwynn Williams, which established a dominant theme for the night: Keeton eventually finished with 461 total yards (340 passing, 121 rushing) and four touchdowns, only slightly overshadowing Williams' 287 yards from scrimmage as a rusher and receiver. Barely three minutes into the second half, the Aggies led 27-3, and later scored to go ahead 41-17 with a minute to play in the third quarter. Then Louisiana Tech's D.J. Banks flipped the switch:

From there, the Bulldogs answered with two more touchdowns to pull within three, 41-38, and somehow managed to force the Aggie offense into a three-and-out in time to get the ball back for their kicker, Matt Nelson, to send the game into overtime as time expired. Alas: It was Utah State's defense that came up with the clinching stop in the extra session, following a USU touchdown in the first frame by forcing Tech to go four-and-out in the second.

Barring a miracle upset next week by lowly Idaho, Utah State will set sail for the Mountain West as an outright conference champion for the first time since 1979, in the Big West. It may also go without its head coach, Gary Andersen, who's bound to get a few calls after winning more games in his fourth year than his predecessor, Brent Guy, managed to win in all four.

Archer's touchdown runs in the Flashes' 31-24 win over Bowling Green covered 74 and 79 yards, respectively, the latter a pinballing, cross-field masterpiece guaranteed to show up again on year-end "Plays of the Year" lists, and that's just what made it to the highlights: His other 16 touches as a rusher and receiver netted 101 yards, a full day's work in its own right. For the season, Archer has 1,284 yards rushing on more than 10 per carry, and averages 13.3 yards every time he touches the ball in any capacity.
- - -
Honorable Mention: In the same game, Bowling Green receiver Chris Gallon had 10 catches for 213 yards, including two touchdowns covering 72 and 81 yards. … Western Kentucky running back Antonio Andrews racked up 342 all-purpose yards in a 31-27 loss to Louisiana-Lafayette, most of them on the ground. … And wretched as his team remains, Arsenio Favor turned in the best game of the season by a Southern Miss quarterback, accounting for 416 yards and three touchdowns USM's highest-scoring effort of the year.

A SOMEWHAT ARBITRARY MID-MAJOR TOP 10.
1. Utah State (9-2). When Gary Andersen accepted the job I doubt most fans were aware Utah State was an FBS program, if they were aware of its existence at all. This week the Aggies are nationally ranked for the first time in 50 years.
2. Louisiana Tech (9-2). Bulldogs came up short in their biggest game of the year, but still lead the nation in both total and scoring offense. (And in net punting, too.)
3. Kent State (10-1). Golden Flashes have already doubled last year's total and set a school record with ten wins, thanks largely to the nation's No. 1 turnover margin.
4. Northern Illinois (10-1). Huskies are 23-2 in their last 25 MAC games, the majority of which have been decided by at least three touchdowns.
5. Boise State (9-2). Revamped Broncos led the Mountain West across the board in defense, and in turnover margin, but never really put it together offensively.
6. Tulsa (9-2). Five of the Golden Hurricane's nine wins have come by one, two, four and seven points (twice), but their losses to Iowa and Arkansas came by just nine combined.
7. Arkansas State (8-3). Red Wolves have taken six in a row en route to the top of the Sun Belt sandings, and scored at least 34 points in all six.
8. Ball State (8-3). Cardinals' back-to-back upsets over Toledo and Ohio U. are the MAC's version of BCS chaos.
9. Toledo (8-3). Rockets had won eight in a row since nearly upsetting Arizona on opening night; now they've lost two straight.
10. Ohio U. of Ohio (8-3). Of course, it could be worse: The Bobcats started 7-0 and have subsequently lost three of their last four. - - -
Honorable Mention: BYU, Fresno State, Middle Tennessee, San Diego State, San Jose State.

Next Week: The Sun Belt title is on the line between Arkansas State and Middle Tennessee and the Southern Miss football team becomes national heroes when they foil a terrorist plot at the Liberty Bowl.